On a beach, brotherhood

Chance meeting in Hawaii brings half siblings together 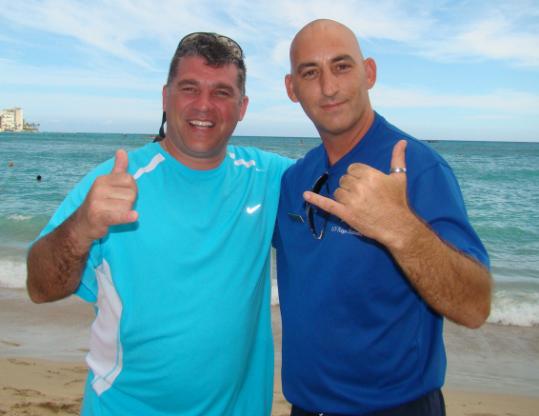 Joe Parker, who grew up in Leominster but moved to Hawaii to escape a troubled upbringing and a failed relationship, wasn’t supposed to be on the beach that day, either. An event planner for a resort, he had hustled down to secure a last-minute surfing lesson for a client.

Hill’s fiancee was about to take a snapshot of Hill and their three children when Parker offered to take a picture of the entire family. Parker immediately detected Hill’s accent; instead of asking the family to say “cheese’’ he asked them to say “Leominster.’’

“When he said that, it took us by shock because we live in the next town over, and what are the chances of a stranger in Hawaii saying that,’’ Maureen Howe, the fiancee, said yesterday.

And then the name game began. Parker threw out several, including Dickie Halligan. Hill responded, “That’s my father!’’

Standing in the glistening white sand, Parker lowered his sunglasses, squinted at Hill, and declared, “That’s my dad, too!’’

A flood of emotion hit everyone like the high-arching waves crashing nearby, they said. Tears flowed down Howe’s cheeks as the two men studied each other’s face and hugged.

“I can’t really put it into words,’’ Parker said yesterday in a telephone interview from Hawaii, describing the feeling of meeting his half brother for the first time, some 6,000 miles from where they grew up. “If I had to, I would say it was chilling, paralyzing, and an out-of-body experience all at once.’’

Hill, who had just returned from the trip, said: “To find a brother midway through life is weird. We spent the last week together, just getting acquainted.’’

Parker turned 38 on Easter Sunday and celebrated with his newfound brother.

“I noticed a lot of things about him that we have in common. We are both salesmen,’’ Hill said.

While they may have some things in common, they were raised differently.

Parker grew up in foster care, and says the experience was a painful one. He ran away when he was 15.

As a child, Parker said, he was told by his mother that Halligan was his uncle.

The two spent time together until Parker turned 5 and did not see him again until he turned 21, when Parker responded to an ad that Halligan had placed in the local paper searching for him.

It was then, Parker said, that Halligan revealed that he was his father and that he had a half brother.

Hill’s mother divorced Halligan when Hill was just a year old, he said. He was raised by his mother and stepfather, but knew his birth father throughout his youth.

“My father was a very unique man, very funny and larger than life,’’ Hill said. “He was a tough guy, a long-distance truck driver, and I ended up being his best friend prior to him dying.’’ Halligan died in 2002.

Both Parker and Hill say they are certain that if they had not met on the beach, they would have never met.

“We lost 38 years of each other, which is a shame,’’ Parker said. “But we are both grateful that this happened and that we get this chance in life to bond.’’