For closed parishes, a day of solidarity 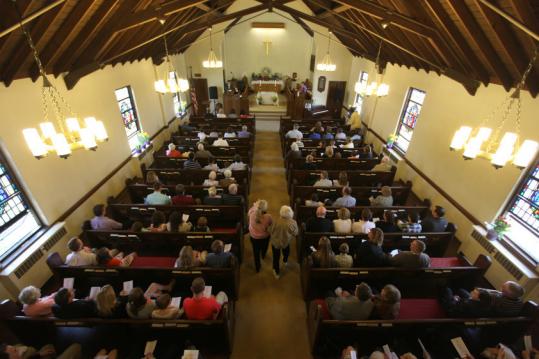 QUINCY — Catholics and Protestants smiled and warmly greeted one another at the First Church of Squantum in between two Easter services yesterday.

As members of First Church concluded their celebration, parishioners from the neighboring Mary Star of the Sea filed in for their first Easter service away from their church, shuttered and darkened a few blocks away, its doors locked and its future uncertain.

They took Communion blessed by a priest, but there was no priest to officiate at the service.

Mary Star of the Sea Church was formally closed by the Vatican in September 2010 after a lengthy appeals process. It was one of 80 churches slated for closure by the Catholic Church in 2004. Since the last Mass was said, parishioners have struggled to retain their identity and sense of community after losing a church many felt was a linchpin that held the close-knit seaside neighborhood together.

“It’s very tough; that church was special,’’ said Maureen Quinn Kenney, 57, a lifelong member of Mary Star of the Sea. “No matter what happens, that’s where I worship God, that’s where I’m from, that’s my home.’’

Across the region yesterday, on one of Christianity’s most sacred days, many Catholics met with the harsh realities of honoring the day without the parishes that had been cornerstones in their lives.

Outside St. Frances X. Cabrini Church in Scituate yesterday morning, Nels Lindblom, 41, of Scituate, stood with his toddler daughter, who had grown restless during the 10 a.m. Easter services led by parishioners.

The parish has not had a priest to officiate its Easter service since the Boston Archdiocese announced its closure and intent to sell the property about 6 1/2 years ago.

“I think it shows that there’s still strength,’’ said Lindblom, who began attending Mass at the parish about 12 years ago. “They still want to get together and celebrate their faith.’’

Parishioners continue to maintain a 24-hour vigil, taking turns sleeping at the church, so that no one can lock them out.

“The archdiocese kind of walked away from us,’’ said John Rogers, who led the service. Outside the church, children scurried around looking for hidden candy in the parish Easter egg hunt.

In Squantum, Kenney said she was very grateful to her United Church of Christ neighbors at First Church of Squantum, for allowing them to use their church, but it was a bittersweet experience.

First Church’s pastor, Michael Robertson, said that church members were very much in favor of sharing their building with their Catholic neighbors.

“This congregation is very open to sharing,’’ Robertson said. “We think of this as Christ’s church; it’s not ours.’’

Sean Glennon, cochairman of the Friends of Star of the Sea, a group of parishioners that is fighting to reopen the church, said the organization was awaiting a decision by Cardinal Sean P. O’Malley on whether the church building will be deconsecrated and sold.

Glennon said his group would appeal any such decision to Vatican courts and even the pope if necessary.

After the service, many of the parishioners spoke of the difficulty of going on without a church that had been such a central connection in their lives.

“It’s like I lost a friend or relative,’’ said Paul McCormack, a member of the church for more than 55 years.

Without a place for weddings, christenings, and funerals, many felt they were losing touch with their neighbors.

“That church needs to be open for this community,’’ said Tony Antonuccio, 68, who was an usher at Mary Star of the Sea Church for more than two decades. “We’re a small island. I don’t think they realize what they do to people.’’

Antonuccio said the recent campaign by the archdiocese to reach out to lapsed Catholics, called Catholics Come Home, was an insult to those who had lost their churches.

“It’s a slap in the face,’’ Antonuccio said. “Catholics don’t want to come back when they close the churches; it hurts.’’

In Scituate, Janie Avery, 62, of Scituate, who has gone to St. Frances for the past five years, said she prefers to attend services led by laypeople.

“I like it better without [priests],’’ Avery said. “I kind of hope they don’t come back.’’

Sharon Harrington, 60, also of Scituate, also noted some benefit to the absence of priests from services. “It’s especially moving to me to see women up on the altar,’’ Harrington said.

Rogers sees the continued attendance each week despite not having a priest as a testament to faith among parishioners.

“The people of St. Frances don’t need to come home; we’ve been home,’’ Rogers said, noting his own frustration with the Catholics Come Home campaign. “They’ve spent a lot of money on a slick advertising campaign.’’

Harrington said she believes the practice of holding church services without a priest will catch on at parishes across the globe.

“I think this is the future of the Catholic Church,’’ she said. “We’re just ahead of them.’’

Stewart Bishop can be reached at sbishop@globe.com; Sean Teehan at steehan@globe.com.