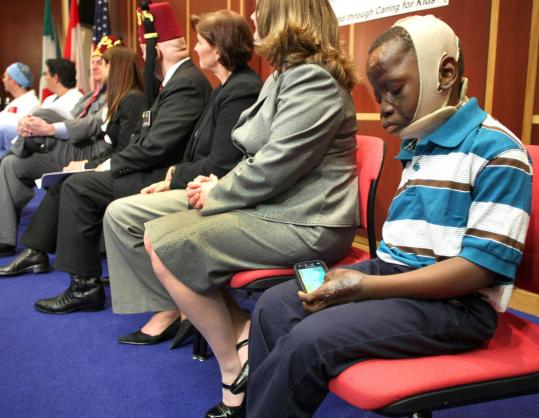 Yusuf Badibanga played a hand-held game during a press conference yesterday where Shriners Hospital doctors explained his treatment. He came to Boston from Congo to be treated for burns he suffered three years ago. (John Tlumacki/Globe Staff)
By Jenna Duncan Globe Correspondent / April 22, 2011

Doctors in the Democratic Republic of Congo amputated the scorched right arm of Yusuf Badibanga, then 6, and knew they could do no more for the badly burned child. So they reached out to volunteers from a North Carolina church, who took on the child’s cause as their own.

Members of Myers Park Presbyterian Church of Charlotte began raising funds to bring Yusuf to the United States for treatment in 2009 and reached out to Shriners Hospital for Children in Boston, which treats young burn victims regardless of their family’s ability to pay. The hospital agreed to accept him as a patient, while Mayor Thomas M. Menino connected the Myers Park volunteers with Catholic Charities of Boston.

After living with extreme deformities from electrical burns for nearly three years, Yusuf, now 9, traveled to Boston earlier this year to have reconstructive surgery that doctors said yesterday should help him have a more normal life.

“We are truly trying to transform this boy’s life,’’ said Kim Brattain, a documentary filmmaker from Charlotte who is chronicling Yusuf’s journey. “All of these people cared so much about this child they had never met.’’

Yusuf and his father arrived in Boston in January, in advance of surgery in February. During an approximately five-hour procedure, surgeons moved skin grafts from his thigh to the areas on his upper right side where his burns were most severe. The burns extended from his chest to his face.

Because the burns were electrical, the damage was deeper than the skin and caused the areas to contract inwards during the original healing process, Dr. Daniel Driscoll, who performed the surgery, explained at a news conference at Shriners yesterday.

The surgery, followed by extensive therapy, has allowed Yusuf to hold his head upright. Previously, it fell toward his right shoulder. It has also allowed him more comfort, mobility, and, most notably to his father, has fixed his snoring, doctors said.

“There’s a long way to go, but we got him through this first stage, and we’re looking forward to improvements we can make in the next year,’’ Driscoll said.

Yusuf was injured during a game of hide-and-seek. He ran into an unguarded power substation and was severely burned by a live wire. Another child in the game was killed.

His father borrowed $100 from friends to take his son to Good Shepherd Hospital in Tshikaji, Congo, where Yusuf had his right arm amputated. Doctors there reached out to Myers Park Presbyterian, whose members went on missions to the area.

Following his treatment at Good Shepherd, the boy had to stop attending school and was taunted by local children because of his injury.

“His playmates called him a monster, and he was shunned,’’ said Brattain, the filmmaker.

Eventually, the groups helping Yusuf were able to bring him and his father to Boston, where volunteer Anne Crane, who speaks their native language, has helped the pair with the transition.

Crane helped Yusuf enroll at Mattahunt Elementary School in Mattapan. Going to school was Yusuf’s biggest wish when he came to the United States, Crane said. At the press conference yesterday, Yusuf said through another translator that his favorite part of being in Boston is attending school, where his favorite activity is coloring.

He and his father are expected to return to the central African country with a group from Myers Park Presbyterian in May. Before he leaves Boston, doctors plan to fit him with a prosthetic arm.

Hospital representatives said they hope Yusuf will be able to return for more treatment, but nothing will be finalized until funds are raised.

Jenna Duncan can be reached at jduncan@globe.com.