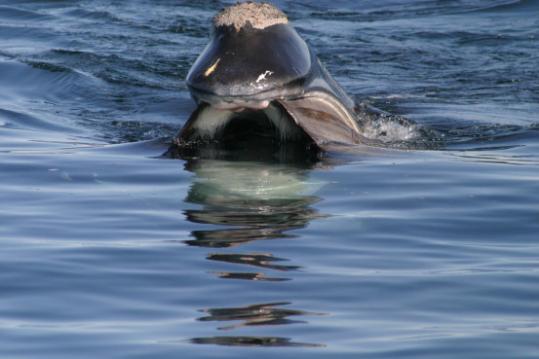 Whale watchers won’t even have to leave land to see a spectacular sight.

A record number of the critically endangered North Atlantic right whales have gathered close off the beaches of Provincetown and Truro and is expected to stay there for at least another week, said Charles “Stormy’’ Mayo, senior scientist at the Center for Coastal Studies in Provincetown.

Researchers counted more than 100 whales during an aerial survey Tuesday, with a preliminary count of more than 200 total, a little less than half of the known population. At some points the whales can be seen just a few yards offshore, to a quarter-mile out.

The whales are drawn to the area this time of year by the stores of zooplankton. Mayo said he thinks there are a large number of the whales there now because the area is particularly rich in zooplankton this year.

“We don’t understand that particularly well, but it’s clearly a combination of oceanographic processes and a lot of marine biology,’’ he said. “There are currents that bring the plankton into the area and local currents that cause them to concentrate, and it’s probably an overlapping of a lot of physical processes. Right now, the situation is good for that, just as when you grow plants in your backyard. Some years, there are better situations than others.’’

North Atlantic right whales can weigh up to 90 tons and sport raised, roughened areas on their heads and snouts that make each mammal distinctive, said Mayo.

They live largely in the Gulf of Maine, from Cape Cod to Nova Scotia.

Mayo said the center had been spotting the whales in the area since February, but began seeing large numbers around two weeks ago. They appear to be concentrating around Race Point, but also can been seen down to Long Point in Provincetown and inside to Truro.

They now number so many that the Massachusetts Division of Marine Fisheries has issued a warning for boaters to steer clear of the animals. Because North Atlantic right whales are endangered — only 450 to 500 exist worldwide — federal law prevents any vessels, other than ones holding research permits, from getting within 500 yards of the creatures.

“The loss of one breeding female could be detrimental to the recovery of the species,’’ said Tanya Grady, a spokeswoman for the Center of Coastal Studies. “They really are teetering on the brink of extinction.’’

Mayo said anyone wanting to see the whales can do so just by walking on the beaches.

“We’re used to seeing right whales,’’ Mayo said. “But even though we do a lot of research on them, it’s a thrilling time. It is a very special occasion being around such an extraordinarily rare animal. The coastal waters off of Massachusetts is providing a home for one of the rarest creatures on earth, and it’s very exciting.’’

Vivian Ho can be reached at vho@globe.com.