Menino to sign deal worth nearly $6m today; 600 bikes, 61 stations to be ready by July 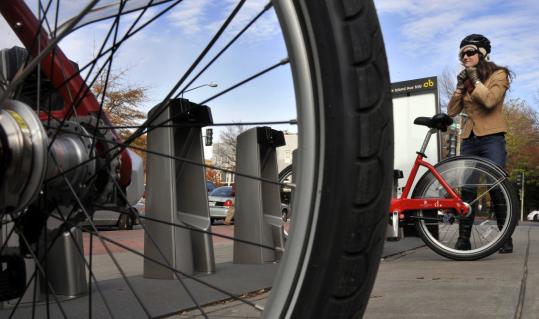 Boston’s bike-share program, scheduled to debut this summer with 600 bicycles and 61 stations in the city, was modeled after a similar program in Washington, D.C. (Mark Gail/The Washington Post)
By Eric Moskowitz Globe Staff / April 21, 2011

As early as this summer, residents and visitors taking quick trips in Boston will be able to rent bicycles from dozens of sidewalk kiosks, under an agreement expected to be signed today that will create a bike-sharing network inspired by those in Paris and Washington.

Boston officials said the system, to be called Hubway, will open in July with 600 bicycles and 61 stations in the city, though they envision growing in a few years to as many as 5,000 bikes at more than 300 kiosks, from Brookline to Somerville.

At an afternoon ceremony with bicycling advocates, Mayor Thomas M. Menino is scheduled to sign a contract worth nearly $6 million with a company called Alta Bicycle Share to build and operate Hubway for three years. Alta is also behind a program that debuted last year in the Washington area and now boasts 1,100 cherry-red bicycles at 114 stations.

No local tax dollars are being used to establish the bicycle rental system. Instead, the city is using grants and donations to cover the start-up costs, while corporate sponsorships and revenue from riders will cover annual operating expenses.

Local officials and planners believe Hubway will generate 100,000 trips in its first year, filling gaps not served by the MBTA and attracting casual bicyclists who until now have avoided biking in the city because of the cost and other challenges associated with owning, storing, and maintaining a bike in Boston.

Hubway will work something like Zipcar, the urban car-share system, but will look more like the Smarte Carte luggage kiosks at airports. Riders must first sign up for memberships — including a liability waiver and a pledge to wear a helmet — on kiosk touch screens, with memberships likely to range from about $5 a day to $85 a year.

Trips shorter than 30 minutes will be free, with incremental charges for longer rides. The city intends to make low-cost helmets available at nearby shops and through a partnership with the antipoverty agency Action for Boston Community Development.

Cambridge, Brookline, and Somerville are finalizing similar contracts to tie into the Hubway network, with stations in those communities expected to open in 2012 or earlier.

“The vision here is that it’s a seamless system,’’ said Eric Bourassa, transportation manager for the Metropolitan Area Planning Council, the agency that provides planning assistance to Boston and 100 other Massachusetts communities. The council brought the neighbors together and coordinated the request for vendor proposals.

“I could pick up a bike in Cambridge and I could bike across the river and drop it off in Boston, and I wouldn’t tell the difference that I have a Cambridge bike vs. a Boston bike or anything like that,’’ Bourassa said.

Menino has had his sights set on bike sharing since he launched a major bicycling initiative in 2007, hiring urban planner and former Olympic cyclist Nicole Freedman with a mission to end Boston’s perennial ranking among the world’s least bike-friendly cities, a distinction attributed to the city’s cramped and twisting streets and aggressive drivers.

Since then, Boston has added 38 miles of bike lanes, up from a single city block in 2007, and installed 1,600 public bike parking spots. Freedman, meanwhile, has led the effort to plan and raise money for the regional bike-sharing network.

“The news [from France] was that this is one of the ways to transform your city into a world-class bicycling city,’’ said Freedman, hired just as Paris was opening its Velib network.

Plans to open by early 2010 were delayed by the goal of building and operating the system at no cost to municipal taxpayers.

“With the great public transit system, diverse population, and burgeoning bicycle infrastructure, we think it’s going to be a home run,’’ said Alison Cohen, chief executive of Alta Bicycle Share, which launched a similar program last year in Melbourne, Australia, as well as the one in Washington.

Alta will build, manage, and maintain Hubway, but use bicycles built by a partner, Public Bike System, the Canadian company behind Montreal’s BIXI bike share.

The Federal Transit Administration awarded the program $3 million last year, because of Hubway’s potential to provide the last or first short leg of a trip for subway and bus riders. About a dozen corporate, hospital, and university sponsors have contributed $1.5 million, led by $600,000 from New Balance.

Alta, not the city, is responsible for liability. If the system fails to attract as many riders as projected, Alta would be on the hook for the difference, Freedman said. Alta will maintain and repair the bikes and kiosks, offer customer service, and provide the online and mobile network that will direct people to nearby stations and available bikes.

The kiosks will be solar-powered, expandable, and movable, anchored by weights. Similar to the bike-share in Montreal, the system will operate nine months of the year, with kiosks removed in December, January, and February.

Station locations have not been finalized, but will be scattered among city sidewalks and at corporate buildings and university campuses.

Boston and the corporate partners have spent the last few months finalizing the details, with contracts with other area municipalities expected to follow. Each will be distinct. Brookline, for example, discourages outdoor advertising, a staple of bike share. But all are eager to participate, Bourassa said.

“We’re very excited about the prospect of bike share coming to the entire metro region,’’ said Michael Lambert, Somerville’s director of transportation and infrastructure. “It certainly works best as a regional system.’’