They upended barriers — and criminals 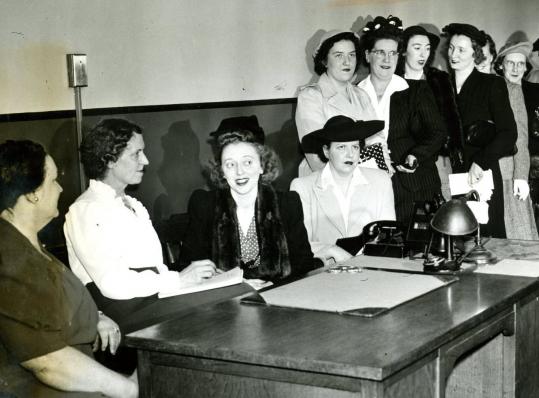 The press sometimes paid more attention to their looks than their investigative skills. Their bosses showered them with awards and citations, but never promoted them. They had the power to arrest suspects and faced armed criminals — but it was decades before they were allowed to carry guns and wear a uniform.

It has been 90 years since Boston’s first female police officers joined the force, and with Monday’s anniversary comes a new recognition of the pioneers — a nurse, an ex-D.C. cop, two stenographers, and two housewives — who together broke the gender barrier in 1921.

“They’re remarkable, and they were alone,’’ said Sergeant Detective Kim L. Gaddy, who along with Margaret R. Sullivan, the department’s archivist and records manager, has scoured city and university libraries for news clippings and photographs in an effort to learn more about the first six.

Last night, they presented their findings to a small audience at the Boston Public Library, where they did much of their research. Boston Mayor Thomas M. Menino plans on designating space at City Hall to exhibit some of the photos and articles Sullivan and Gaddy unearthed.

While the department remains a male-dominated bastion — women represent about 13 percent of the city’s 2,074 sworn officers — the research nevertheless shows the strides they have made from second-class citizens in the department to full-fledged members who can carry guns and rise as high as police commissioner.

In an interview two days before the presentation, Gaddy and Sullivan said they want the city to know the rare stories of the women who for more than 20 years were the only women beating the streets of Boston with a police badge, but have since been forgotten by most in the annals of department history.

In 1921, the original officers, dubbed the “flapper squad’’ in the press, were hired to watch out for young women in the city, who authorities feared were falling prey to “mashers,’’ skirt-chasers who lurked in movie theaters, parks, and beaches. Their supervisors wanted them to track down runaway children and keep young women from drinking with sailors and haunting nightclubs.

“The automobile took young people off the porch and into places unknown,’’ Sullivan said. “They hired the women to take care of the wayward teenage girl problem.’’

Paid $1,400 a year, the officers, who ranged from 25 to 35 years old and were more educated than average policemen, earned the same as their male counterparts and were assigned to the Bureau of Criminal Investigation.

“They may be uniformed as the London police women are, in trim navy blue suits, consisting of very short skirts and Norfolk coats,’’ the article speculated.

Instead, they wore plain clothes, often donning the veils and hats the fashion of the times dictated. And though their duties were seen as “motherly,’’ they often were called in to hunt down shoplifters, con artists, and jewel thieves.

They were also assigned to protect female witnesses testifying against gang leaders. And they were not afraid to use brute force, even though they didn’t carry weapons.

“They had nothing. They would arrest and get into fistfights and win,’’ Gaddy said. “The women only had their wit and intellect to get them through their tour of duty.’’

According to news reports, in 1924, Officer Margaret McHugh, a powerfully built 200-pound woman known for her ability to track down stolen goods, confronted an unruly man, whose drunken behavior on a Roxbury street had clogged traffic. The man, a boxer by trade, refused her order to leave. When she insisted, he punched her in the face, knocking her into the crowd that had gathered.

McHugh charged back, punching him and knocking him off his feet. He had to be hospitalized.

There were no more women hired until 1943. Among the new recruits was Officer Margaret Foley, a fashionable woman branded a “glamour girl’’ in the press. In 1949, she faced off with a drunken diner who brandished a gun at a downtown restaurant where Foley had stopped in for coffee.

Foley pried the gun away from him, grabbed him by the neck and dragged him outside, where she commandeered a cab and took him to the nearest station.

During the ’40s, the first black women joined the department. One of them, Dorothy Harrison, avoided being shot by an armed man when she reached into her coat pocket and pretend to grab for a gun.

“They were enforcing the laws of social standards,’’ Gaddy said. “But as soon as they got on the street, they were faced with the same dangers as policemen.’’

In their research, Gaddy and Sullivan found few articles or reports in which the policewomen complained of discrimination. But some news clippings showed they struggled to be taken seriously.

In 1922, Officer Sabina Delaney, a former nurse who took a pay cut to do police work, announced at roll call that she was quitting. She said she could no longer follow the orders of her captain, who wanted her and the other women to sneak into speakeasies and entice men into buying them drinks so uniformed officers could then arrest them.

“No self-respecting woman could do the work assigned to her,’’ Delaney said, according to news reports at the time.

In 1934, Irene McAuliffe, a highly regarded officer, was abruptly transferred from the detective bureau to take calls at the switchboard desk. A lieutenant justified the change: “A woman could do a better job on a switchboard than a man,’’ according to news reports.

Two years later, Irene Bohmbach, a decorated officer, tied for the second-best score on the sergeant’s exam, beating out hundreds of men, including her husband, a fellow officer. But instead of promoting her, Commissioner Eugene C. Hultman bypassed her repeatedly. His excuse, Sullivan said, was that her promotion “might cause discord in the home.’’ Bohmbach’s husband was eventually promoted.

Bohmbach did not complain, but responded with irony.

“While I think it would be a great honor to be made a sergeant, I want it distinctly understood that I expect no favors because I am a woman,’’ she told a Globe reporter, who observed she smiled “wryly.’’

In 1972, 12 years after the last of the original six retired, policewomen finally were given guns and uniforms, navy blue double-knit dresses and a derby hat. Slacks were optional.

The attention from some in the press was still retrograde.

“The newest uniformed members of the Boston Police Department are in better shape than any of their predecessors — and how!’’ one scribe snarked. “The girls may not be able to run as fast as fellow officers, but they have much better legs.’’

“I just thought that was appalling,’’ she said. “I think they were more gentlemanly in the ‘20s.’’

Lisa Tuite and Rosemarie McDonald of the Globe staff contributed to this report. Maria Cramer can be reached at mcramer@globe.com.