Rwandans gather at Hub event to commemorate and celebrate 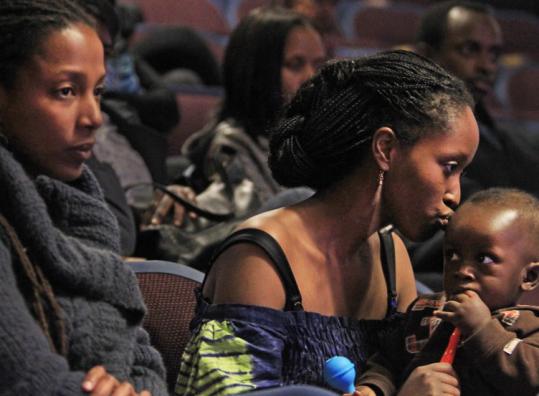 Seventeen years after genocide ravaged their homeland, Boston-area Rwandans came together yesterday afternoon at Boston College High School to observe the anniversary of the outbreak of violence. But they also gathered to celebrate the resilience of their people.

Men, women, and children embraced in greeting, a few in bright, traditional Rwandan dress. Most were survivors of the genocide who now live in the Boston area, and they said they wanted to send a positive message.

“We, as a community of survivors, we of course remember our loved ones who died,’’ said Jean Bosco Rutagengwa, cofounder of Ibuka, an organization that supports survivors of the genocide.

“We are not stuck in this state of sadness,’’ he added. “We have also moved on. We are part of rebuilding, what is making progress, what is contributing to our country.’’

The genocide, which spanned 100 days in 1994 and resulted in roughly 800,000 deaths, grew out of conflict between two ethnic groups, Hutu and Tutsi. Most of the victims were Tutsi.

Most present yesterday were Tutsi, said Chantal Kayitesi, who chairs Friends of Rwandan Genocide Survivors, which helped sponsor the event. She said a few Hutu may be among the dozens of people expected to attend. No one, however, could point specifically to a Hutu attendee. The difference, attendees said, is no longer important.

“Do we really want to keep hanging onto the anger?’’ said Gabriella Mukakabano, 21. “I’ve never really known [this group] to focus on that,’’ she said of the distinction between the Hutu and Tutsi ethnic groups. “Those separations are what caused [the genocide].’’

Mukakabano was living in Rwanda during the civil war that claimed her father. “You don’t remember the politics of it,’’ she said of being so young during the genocide. “I just remember being trapped in our house and hiding.’’

The Rev. Emmanuel Rutangusa, who is 31 and a student at Boston College, lived through the genocide along with two sisters, but lost five other siblings, both his parents, and more extended family than he can count.

“We didn’t have a time to mourn for our people, to think about them, and pray for them,’’ he said.

Rutangusa said he would take time during the evening’s speeches, prayers, and stories of inspiration to grieve and try to come to terms with what happened.

“As time goes on, you have to understand why they did that,’’ he said.

“I was thinking as time goes, maybe I’ll try to forget [the memories], but they come fresh,’’ Rutangusa said.

“They are always fresh.’’

This was the third year of the event, which was also sponsored by The Paraclete Foundation, a Boston nonprofit, and Boston College High School.

Organizers said this year’s focus was on hope, promoting truth, and on how the African nation is bouncing back. Sister Ann Fox, president and executive director of Paraclete, said that while Rwanda is still very poor, it “has made a remarkable recovery from just absolutely utter destruction.’’ She cited recent news that every child in Rwanda will have a right to free education through grade nine.

“We are glad our youth are emerging from the destructions of a genocide,’’ Rutagengwa said. “It’s a success story. I’m glad they didn’t lose their mind and are strong, young people.’’

Ursula Munn can be reached at umunn@globe.com.