Running last, but not least

The Boston Marathon race director, Dave McGillivray, makes it a point to run the entire course, long after the trumpets have faded. 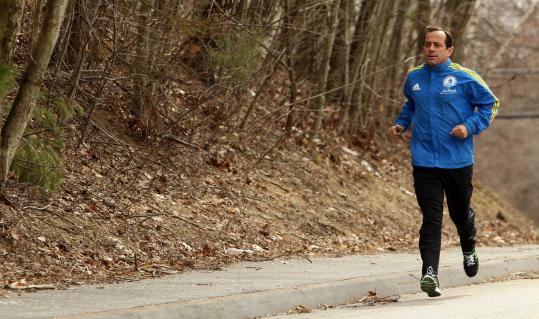 L ong after the champs are crowned in laurel wreaths, after the roadblocks have been cleared and the cheering throngs have left, Dave McGillivray can be found loping through the dark toward Boylston Street, with his own motorcycle escorts, sweating through his annual tradition of being the last runner to cross the finish line of the Boston Marathon.

“Years ago, there were people who extended their sympathies as they watched me, and there were those who drank too much and yelled at me to pick up the pace, like I was some kind of slug,’’ he said. “They would say things like, ‘The old man went by two hours ago; why don’t you pick it up?’ ’’

More recently, McGillivray has received a warmer reception. “Two years ago, while running through Ashland, someone started yelling at me. Then a guy with him told him I was the race director. I felt vindicated, like I was somebody.’’

Since he took charge of organizing the world’s oldest annual marathon in 1988, McGillivray, an elite runner who twice jogged across the country, faced a quandary: How could he continue running the marathon, which he had done every year since he jumped in as a bandit at age 16, while overseeing the smallest details of a race that now includes 27,000 runners and requires 35,000 gallons of water, 30,000 feet of fencing, and 1,500 security personnel, among many other things?

His solution was to run the 26.2-mile course after everyone else, which meant making an already long day that began well before dawn that much more exhausting.

It is a tradition he has completed for the past 23 years, and if he finishes this year — he’s now 56 years old and has not trained much due to a bone spur in his right heel — it will be the 39th time he has completed the race and his 126th marathon.

“I have no doubt he’ll finish,’’ said Bob McGillivray, who every year leads the small crew that escorts his brother from Hopkinton to Copley Plaza, along the way feeding him chocolate chip cookies made with their mother’s recipe. “He’ll keep doing this as long as he can. He’s very determined and likes to show that if you put your mind to it, you can do anything.’’

The only time Dave McGillivray did not finish was his first year, when he borrowed a friend’s bib and conked out at Heartbreak Hill, 20 miles into the race, with blisters and muscle cramps. He was in so much pain a police cruiser took him to Newton-Wellesley Hospital, and his grandfather, who was waiting for him in Coolidge Corner, never saw him finish.

After his grandfather died a few months later, McGillivray vowed to run the race in his memory every year for the rest of his life. He thinks of him every time he passes the cemetery at the 21.5-mile mark in Brighton, where his grandfather is buried.

“I continue to live by his advice that I must earn the right to continue to do this event,’’ he said.

McGillivray’s path to the starting line comes after a grueling day that begins before 4 a.m., when he usually arrives at the athlete’s village in Hopkinton. He is responsible for ensuring that 790 Port-o-Johns are there and clean, that 493 buses are ready to pick up runners on Boston Common, that all 36 course clocks are in place and working, and that, among many other things, all 24 hydration stations are ready to go.

At 9 a.m., he gives the signal for the starting gun, which gets the first wave going with those considered mobility-impaired. Shortly before the elite male runners leave, he boards one of the lead vehicles, from which he oversees the race, ensuring that runners are not violating rules and that security does its job.

Over the years, he has had to address all sorts of problems, such as television helicopters flying low and interfering with the race, people jumping over the barricades to run beside the leaders, a car blocking the course.

“My job is to prevent fires, not necessarily to put them out,’’ he says.

At the finish line, he makes sure everything is ready, including 27,000 finisher’s medals, 35,300 energy bars, and 39,575 mylar blankets. About 3 p.m., after the victory ceremonies and most of the runners have finished, he does a final check with his people, heads back to his hotel room, changes, and puts on his bib, No. 100.

A Boston police cadet usually provides him an escort to Hopkinton, where he meets his crew: his brother, friends, and several local police officers and state troopers.

“No matter how you run it, 26 miles is a long way,’’ McGillivray wrote in an essay about the tradition, which he calls the “Boston Marathon Night Shift.’’ “Certainly, it doesn’t make good sense to spend 12 hours on your feet, under unenviable conditions and with no nutritional intake, and then find yourself at the starting line of a 26.2-mile trek. When I start, I feel like I have already run half a marathon.’’

Depending on the year, he tries to leave in the late afternoon. A member of the Hopkinton Marathon Committee paints next to the starting line the number of marathons he has finished and a small crescent-shaped mark, which reads “Dave’s Moonlight Run.’’

His motorcycle escorts help light the way and provide inspiration — especially when it’s dark, cold, or raining — and the few spectators left on the course are often drunk and hurling insults. Police also block intersections and stop traffic when he has to cross through a red light.

“We just want to be there to support him,’’ said Ashland Police Chief Scott Rohmer, who once ran with McGillivray to Framingham, and provides a motorcycle escort until the finish line. “It’s hard to imagine how he can do this, given all the stress of the day. But we see his perseverance as an example for all of us.’’

Because there are no more water stations, his brother rides ahead and hands him Gatorade and other fuel along the way.

Another obstacle: All the trash from the race that remains, some of which he cleans up as he makes his way. “A benefit of this is that it allows me to inspect everything at the end of the race,’’ McGillivray said, describing how he and his son have loaded abandoned water coolers, barriers, and other leftovers into his truck.

Over the years, friends have joined him for the full run. Sixteen years ago, Jack Fultz, who won the Boston Marathon in 1976, finished just after McGillivray, allowing him to proudly call himself the only runner to finish the race first and last.

A Boston officer who escorted him from Hopkinton one year hopped off his motorcycle at the end and ran the last half mile with him, in his boots and uniform.

When McGillivray makes the final turn onto Boylston Street, he does not hear the roar that greets many runners during the day, which sounds like the crowd at Fenway Park after a home run.

But the troopers with him start their sirens, and people take notice, cheering him to the end, even if they have no idea who the straggler is.

As he huffs it to the finish line, his friend Chris Lane, who works for the Massachusetts Track and Field Officials Association, is there ready to give him an official time. It now takes him a little more than four hours, an hour and a half longer than his personal best.

“He certainly doesn’t get the best time,’’ Lane said. “But he’s in his own category, in his own division.’’

There’s usually a small crowd waiting at the end, sometimes including former champs. They hold up a special tape for him to break, marking the true end of the race.

Then he gets his medal and his own wreath.

“I’m probably one of the most untrained people going into the marathon,’’ he said. “I’m just happy to make it the whole way now.’’