Learning to cope with their autistic children

To these parents, death of LaBrie’s son unforgivable 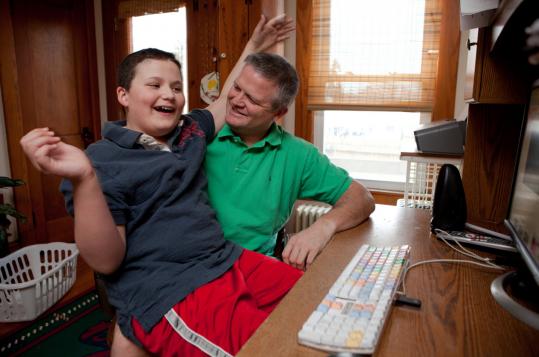 Paul Farnsworth of South Hadley — with his son James, who has autism — said there are not enough support programs to help parents with autistic children because of massive budget cuts to family services. (Matthew Cavanaugh for The Boston Globe)
By Meghan E. Irons Globe Staff / April 15, 2011

As Lynn Tougas followed the trial of Kristen LaBrie, she could not help thinking about her own bewildering years caring for an autistic son. They were tough times.

When he was diagnosed with Crohn’s disease, she had to get help holding him down to give him his medication. And though she and his teachers spent months trying to inoculate his fears, practicing with a syringe that had no needle, he still kicked and screamed when he had his blood drawn.

As LaBrie faces sentencing today in the death of her son, Tougas can sympathize with the depression, overwhelmed feelings, and helplessness LaBrie may have experienced when prosecutors say she withheld life-saving cancer treatments for her son Jeremy.

“I do really feel bad for this mother, because I realize how overwhelming it is, especially when you are a single mother, and you are depressed,’’ said Tougas of West Roxbury. But “it’s a human life. You can’t let him die.’’

Parents of autistic children said yesterday that they felt compassion for LaBrie and described their own long struggles to understand, care for, and live with their children. They told of children who do not speak or who thrash around the house like freight trains, slamming their bodies on the floor, refusing to be touched, or needing constant stimulation.

Most said such trials can push parents to the edge. But they could not fathom withholding life-saving medications, under any circumstances.

“I can’t understand watching your child die,’’ said Natalie Lambert, who has two boys with autism, ages 7 and 4.

LaBrie’s son had autism, and he was also nonverbal and developmentally disabled, totally dependent on his mother. In 2006, his doctors diagnosed him with a treatable case of non-Hodgkin’s lymphoma, but LaBrie failed to administer the chemotherapy treatments. When doctors realized he was not taking the medications, his condition had worsened to leukemia.

LaBrie, a single mother who lived in Beverly and Salem, lost custody of the boy to his father, Eric Fraser. Jeremy died in hospice care in March 2009 at age 9. Fraser was killed in a motorcycle accident last year.

In her defense, LaBrie said she had been overwhelmed by caring for Jeremy. She said she suffered from depression and could not bear to see the pain the cancer medications were causing her son. Her younger sister, Elizabeth O’Keefe, said LaBrie would never intentionally harm her child.

“I will never believe that in my life, ever,’’ she said.

On Tuesday a jury in Essex Superior Court found LaBrie guilty of attempted murder, which carries a maximum penalty of 20 years in prison. She will be sentenced today.

Paul Farnsworth said there is not enough support for parents, and he blames budget cuts that have stripped services for parents with children with autism, like LaBrie, and pushed them past a breaking point.

“I would put some blame on the massive cuts to family services, so that they don’t have the budget to help’’ families in need, said Farnsworth of South Hadley, who has a son with autism. “Schools are being cut; special education is the first one to go. If there is ever a case that shows how much families are in need of help, this one does.’’

Bonnie Marcel of Quincy said there are many extenuating circumstances in LaBrie’s case, making it difficult to judge her harshly. Still, she blames LaBrie for her son’s death.

Marcel has had her own battles with her own son, now 19. He has a habit of bolting. When he was younger he used to climb to the roof. She sought help and dealt with it, she said.

As a mother, Marcel said, it was LaBrie’s duty to protect her son. “This child had every right to live like a typical child would,’’ said Marcel. “His case should be treated the same.’’