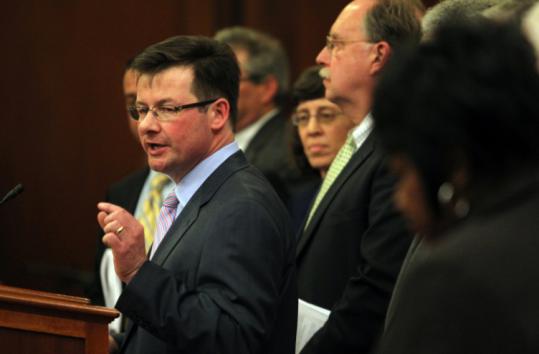 Brian S. Dempsey, a Haverhill Democrat and chairman of the House Ways and Means Committee, said the union proposal is “the most significant reform we can make this year.’’ (Bill Greene/ Globe Staff)
By Michael Levenson and Noah Bierman Globe Staff / April 14, 2011

House Speaker Robert A. DeLeo, setting up a major fight with unions, proposed yesterday to strip local public employees of most of their rights to bargain over health care, as part of a $30.5 billion annual state budget that imposes the largest year-to-year spending cut in two decades.

The proposal to restrict collective bargaining rights, once unthinkable in heavily Democratic Massachusetts, touched off a firestorm, with labor leaders denouncing it as an assault on public workers and local officials calling it a long overdue step to control soaring health costs. DeLeo’s plan follows tougher efforts in Wisconsin, Ohio, and other states to broadly deny union workers such bargaining rights.

The House plan gives local officials, such as mayors and town councils, unfettered authority to set copayments and deductibles for local public employees without having to negotiate with unions. Only the share of premiums paid by employees would be on the health care bargaining table.

Ten percent of the savings from the changes would be given back to union workers for one year. House leaders said the plan would save cities and towns $100 million in the budget year that begins in July.

“It’s the most significant reform we can make this year,’’ said Brian S. Dempsey, a Haverhill Democrat and chairman of the House Ways and Means Committee, which controls the budget process.

Outraged union leaders said they would work to oust legislators who vote for the plan.

“The only thing that this budget does is silence the voice of working families,’’ said Edward Kelly, president of the Professional Fire Fighters of Massachusetts. “But those voices won’t be silent in November 2012.’’

The House plan would not raise taxes or fees, but it would cut $94 million more than the proposal Governor Deval Patrick unveiled in January. State leaders are grappling with the loss of $1.5 billion in federal stimulus money and a shaky economic recovery.

House leaders said their plan would close a $1.9 billion state budget gap, in part by matching the governor’s proposal to withdraw $200 million from the state’s rainy day fund.

The House plan also matches the governor’s proposal to boost school aid by $119 million and to slash local aid by $65 million, or 7 percent, a reduction that will hit police officers, firefighters, senior centers, and other local services. Local aid has already been cut by 32 percent, or $416 million, over the last three years, according to the Massachusetts Municipal Association.

Municipal officials said they could tolerate this year’s cut, but only if DeLeo succeeds in giving them greater power to rein in rising health costs.

“You need this reform now; otherwise you’re going to [continue] to lay off employees to pay for benefits,’’ said Mayor Scott W. Lang of New Bedford, president of the Massachusetts Mayors’ Association.

Local officials have been fighting over the issue for years, frustrated that municipalities pay higher costs for their employees than the state does for its workers through the state’s health insurance program. Local officials have complained that their unions can effectively block any attempts to change their health care, unlike state employees, who have no power to bargain over their copayments and deductibles.

Mayor Thomas M. Menino of Boston said health care will cost his city over $300 million next year and will continue to rise unless there is serious change.

“This plan provides the tools municipalities across the Commonwealth need to keep teachers in classrooms, police on the streets, and our neighborhoods clean and vibrant,’’ Menino said in a statement.

Public employee benefits have become a national flashpoint, sparking protests nationwide. While Massachusetts remains a relative haven for organized labor and the House plan falls far short of proposals in other states, it nonetheless illustrates how the movement to curb union power has made inroads in this state.

Labor leaders promised yesterday to fight the plan by DeLeo, a longtime union ally who has pushed their campaign to legalize casinos.

“This is going to wake up the sleeping giant,’’ said Raymond F. McGrath, lobbyist for the International Brotherhood of Police Officers.

Patrick has sought a middle ground between unions and local officials. His plan preserves some power for unions to negotiate by giving them a brief window to bargain before local officials would be allowed to impose their own terms unilaterally. In addition, Patrick has held out the possibility of union members keeping more than 10 percent of the savings.

Union leaders are now looking to him and to Senate President Therese Murray to stand in DeLeo’s way. Murray declined to comment yesterday. At the Greater Boston Chamber of Commerce last week, she said the Senate will give local officials greater power to control health costs, but she added: “I emphatically agree with the governor that labor has to be at the table.’’

“They need to have a voice in the process,’’ he said. “They don’t have a veto in getting to the result, and the governor’s been clear about that.’’

The House budget would also make painful cuts to social services. Medicaid spending next year would be restrained by about $800 million, by forcing the poor to pay more for prescription drugs and other medical services. House leaders said the state can save $350 million simply by renegotiating contracts with health care companies.

In addition, most of the 11,500 elderly and disabled residents who receive adult day care because they cannot live independently will lose their services because of a $55 million cut. Dempsey said he did not know what would happen to these people, many of whom are frail and suffer neurological disorders, such as Alzheimer’s. “That’s the question and that’s the concern,’’ he said.

The House plan also eliminates Medicaid coverage for 19,000 legal immigrants, on top of 14,000 who have previously seen their benefits cut.

One hundred and forty-five of the state’s 626 mental health beds would be eliminated under the House plan, slightly fewer than the 160 beds the governor proposed cutting.

Patrick issued a statement saying he was pleased that the House budget is balanced, but concerned that some of his priorities — such as Shannon grants and other program to combat youth violence and health care for legal immigrants — were not funded.

The House budget waters down Patrick’s sweeping proposal to create a new public defender agency by hiring 1,000 lawyers and 500 support staff. Instead the plan calls for hiring 200 state public defenders and establishing a system to screen out defendants who can afford to pay for their own lawyers.