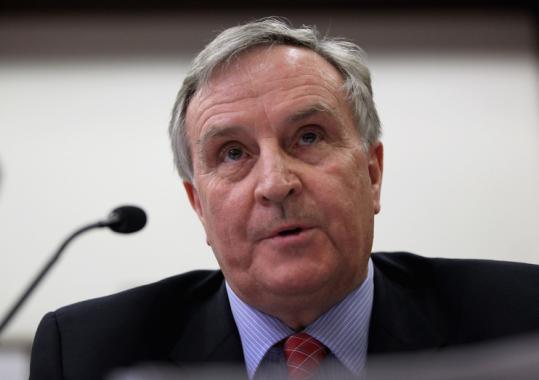 After a winter of repeated commuter rail failures, top state public transportation officials assured a panel of legislators yesterday that acquisition of new locomotives, retraining of maintenance staff, and other steps would get the trains running on time.

“We want to make it clear that the level of service that our customers experienced this past winter season is absolutely unacceptable,’’ said state Transportation Secretary Jeffrey B. Mullan. “We are not here to make excuses.’’

Mullan said on-time performance for January for the 13 commuter lines running out of North Station and South Station in Boston was 72 percent — far lower than its goal of 95 percent.

“We failed in our mission of excellence,’’ said Mullan during a two-hour afternoon hearing in the State House called by the Legislative Joint Committee on Transportation in response to commuter rail complaints.

Several legislators, including Thomas M. McGee, Senate chairman and a Democrat from Lynn, and Senator Jennifer L. Flanagan, Democrat of Leominster, made it clear that late and delayed trains had many of their constituents peppering their offices with complaints.

“Do you know how long 2 1/2 hours can seem when you are stuck on a train after working all day and you have to get home to pick up your kid at day care?’’ said state Representative David Linsky, Democrat of Natick, referring to a Feb. 28 train out of South Station that took four hours to reach its last stop in Worcester because of engine troubles.

But for the most part, Mullan and Davey appeared to placate legislators with repeated references to the recent purchase of two diesel-electric locomotives, the leasing of another half-dozen locomotives, and the expected delivery of 20 more in 2013.

In addition, they said 75 coaches will be delivered next year.

“Passengers will definitely see improvement,’’ said James O’Leary, who heads the private sector company, Massachusetts Bay Commuter Rail Co., that has operated the commuter rail system under contract with the MBTA since 2003.

Some 70,000 riders are on the system daily, according to the MBTA.

Noting the current contract with MBCR expires in two years, the House chairman, William M. Stauss, Democrat of Mattapoisett, asked what plans the MBTA had for the future operation of the system.

Davey said the Massachusetts Bay Transportation Authority must decide by the end of the year whether to operate the commuter service itself, solicit bids as before from contractors for a five-year contract, or follow the example of Denver in putting the contract out for a 30-year contract.

The advantage of a 30-year lease is that it would “incentivize a private sector’’ contractor to make private investments in the system, Mullan said.

Much of the discussion focused on the woeful fiscal condition of the state’s transportation system, which by some estimates requires hundreds of millions a year more in funding for proper maintenance.

But, Mullan noted, the state is still billions of dollars in debt for the Big Dig and other large-scale projects.

What’s more, he said, little help appears likely to come from Washington, where President Obama agreed to a short-term $38 million budget cut. More significant cuts may be in the offing, he said.

“I think that’s going to loom quite large for the Commonwealth, particularly its capital program going forward in both highway and transit,’’ Mullan said. “We definitely anticipate that happening and need to be prepared for it.’’