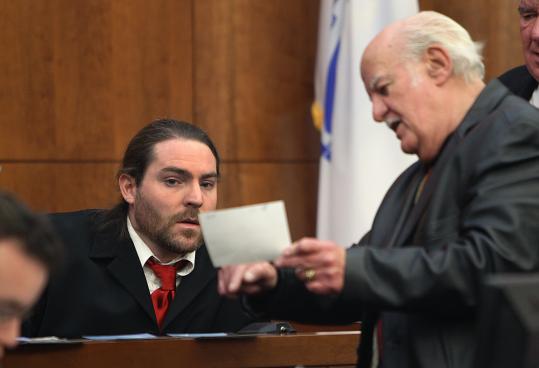 David Fitzgerald showed a photo to his neighbor Courtland Harlow on the witness stand in a harassment hearing in Plymouth District Court last month. A year-old state law has made such cases possible. (John Tlumacki/ Globe Staff)
By David Abel Globe Staff / April 12, 2011

One man took his neighbor to Malden District Court for allegedly blowing leaves on his property, and a woman in Boston Municipal Court insisted that actor Chuck Norris used high frequency radio transmissions to harass her at home.

And there were the two elderly neighbors who, nurturing old grudges, spent more than five hours seeking restraining orders against each other in Plymouth District Court. One said the other’s nighttime strolls in black clothing were frightening; the other said the first blocked him from crossing the street.

Court and law enforcement officers have cited such cases, which were all rejected by judges, as evidence that lawmakers should reconsider a year-old law that expands the rules for who can seek a restraining order. Previously, filing was restricted to relatives, household members, or someone intimately related to the person said to be harassing them.

Officials complain the new law, which creates a category of restraining order called a harassment prevention order, has led to a surge in filings. Too many of the cases are frivolous, taxing the limited resources of courts and police departments, they say.

“Now, it’s every kook in the world who comes in and wants to file a harassment order against their neighbor or landlord or someone who just annoys them,’’ said Dan Hogan, clerk magistrate of Boston Municipal Court. “It’s nuts. This is not what the law was intended to do. We don’t have enough people to be handling all these things.’’

Harassment prevention orders were meant to close a gap in the law that made it difficult to obtain a restraining order against an acquaintance or stranger who engaged in a range of harassing behavior, including stalking, threatening to damage property, and sexual assault.

Since the law passed, the number of restraining order filings has shot up. In the ten months beginning in June, the number jumped 47 percent over the same period last year in a sampling of more than half of the state’s district courts. The courts list new and traditional restraining orders together.

Officials at the Massachusetts Office for Victim Assistance, a state agency that helps residents file restraining orders, said their clients sought 1,075 harassment prevention orders between May and the end of February. Of those, 21 percent said they were victims of stalking or sexual assault.

In Boston Municipal Court, officials said there have been at least 318 harassment prevention orders sought between May and the end of March, which compares to 327 requests in Malden District Court, 179 in Plymouth District Court, and 44 in Holyoke District Court during the same period.

Proponents of the law acknowledge that it burdens court resources and that it has sparked too many complaints that do not belong before a judge. To be eligible for a harassment prevention order, plaintiffs who were not sexually abused must cite three occasions when they felt subjected to “willful and malicious conduct.’’

Proponents say it is too early to say whether the law should be amended.

“There have been a lot of frivolous cases, and we acknowledge that, but this is probably one of the most important laws on the books for sexual assault and rape victims,’’ said Colby Bruno, managing attorney for the Boston-based Victims Rights Law Center, which spent years lobbying for the law.

She noted that an estimated 85 percent of sexual assault victims know their assailants but lack a substantive relationship with them. In the past, the victims’ only other options involved paying hundreds of dollars to seek a temporary restraining order in Superior Court, which often required the help of a lawyer to comply with court procedures. “Even then, the only penalty was civil contempt if it was violated,’’ Bruno said.

Under the new law, victims alleging harassment merely have to sign a sworn statement and await their date in court. “Now, if a criminal violates a harassment prevention order, they are criminally liable,’’ Bruno said.

Pressure to pass the law increased in 2003, after a Middlesex jury convicted Steven Caruso of Medford of using a package bomb to kill Sandra Berfield, a 32-year-old waitress in Everett who repeatedly rebuffed his romantic advances.

“There was a gaping hole in the legislation, and there were victims of criminal harassment, stalking, and sexual assault who needed to have the ability to protect themselves,’’ said Helen Guyton, an associate at Mintz, Levin, Cohn, Ferris, Glovsky and Popeo, PC, who helped shape the new law. “This new order allows victims of these different criminal acts to get the protection they need.’’

But court and law enforcement officers say abuse of the law has become a burden, pointing out that the state’s trial courts have lost more than 1,000 positions due to budget cuts since fiscal 2008.

“It’s been a significant drain on resources,’’ said Marybeth Brady, clerk magistrate in Malden District Court, where harassment prevention orders this year account for one-third of all restraining orders. “We have a lot of neighbor disputes, and landlord-tenant disputes. This is a new mechanism for them to hear their problems, when a lot of these matters people used to resolve themselves.’’

In Plymouth District Court, where harassment prevention orders this year account for nearly half of all restraining orders, Clerk Magistrate Philip McCue said he worries that the number of frivolous complaints will “dilute the significance’’ of traditional restraining orders.

“What we’re seeing is that a lot of people aren’t litigating an incident; they’re litigating a relationship,’’ he said.

In Great Barrington, Judge James B. McElroy, who retired last month as presiding judge in Berkshire District Court, said the law has had unintended effects.

“We would chuckle at some of these cases,’’ said McElroy, adding that a number of cases he heard involved friends upset about what former friends said about them on Facebook. He estimates that he denied granting harassment prevention orders in about 75 percent of the dozens of cases he heard in the past year and suggests that the Legislature sharpen the law to include only cases in which people are “in fear of serious physical harm or financial harm.’’

Wayne Sampson, executive director of the Massachusetts Chiefs of Police Association, said many law enforcement officials predicted from the start that the law would generate frivolous complaints. “But,’’ he said, “if we don’t advise citizens that they can seek redress through the courts, the communities might be at risk of liability.’’