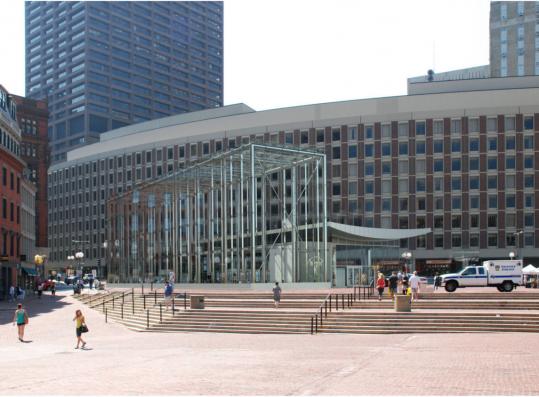 An artist’s rendering of what the new station would look like. It calls for a new glass entrance as well as new escalators, elevators, stairs, lighting, and communication systems.
By Eric Moskowitz Globe Staff / April 10, 2011

In construction, time is money. Transportation officials in the Big Dig state say they are committed to doing highway and MBTA projects faster and more efficiently than the public has become resigned to expect.

Take the Interstate 93 bridge replacement project that the state is calling “Fast 14.’’

That plan calls for the replacement of 14 deteriorated I-93 bridges in Medford — seven in each direction — this summer. Using prefabricated sections, the state will swap out old for new and replace each bridge in a single weekend, with financial penalties for the contractor if the highway is not open again by Monday morning.

Under traditional methods, the work would have required three years of partial closures, doing a lane at a time. Hailing the innovation, the US Department of Transportation just awarded it $1 million through a grant program to promote innovative techniques.

When it comes to subway stations, of course, old and new can’t be swapped in a single weekend.

So the choice is between keeping a station open during construction, to minimize the inconvenience to the public, or closing it to speed the work and save money — kind of like ripping off a Band-Aid quickly, with a shorter but more intense sting.

The T has tended to err on the side of the former. That made projects such as the Ashmont and State Street transit stations and the Kenmore Square bus facility seem to take epochs, with the additional time and work costing T riders and taxpayers tens of millions of dollars.

Until now, with the reconstruction of Government Center approaching.

“There is a policy shift,’’ Secretary of Transportation Jeffrey B. Mullan said last week, aimed at curbing “the seemingly endless construction cycle.’’

With Government Center, the T is leaning toward closing the station for two years. That could save $16 million and shave 15 months or more off a project that might take four or more years and approach $71 million the old way.

It’s not a decision made lightly, Mullan said, nor is it yet written in stone. The work is not expected to begin until November 2012.

“Certainly we are not going to be advocating a major issue of closing such an important station without a lot of discussion with the city and with the customers,’’ he told the board that oversees the DOT and MBTA last week, in a briefing that signaled the beginning of that public process.

State officials have worked closely with city officials on the design. Now they are talking about the construction, and they will gather plenty of public input, MBTA General Manager Richard A. Davey said.

Board member Elizabeth Levin, a Boston resident, said she wants to make sure the city is comfortable with the choice. “They haven’t definitively told us that, but they clearly were happy that we were trying to be creative in finding ways to reduce that schedule,’’ Davey said. “While we presented it such that the closure seems to be the alternative that makes a little more sense . . . we still want to make sure we have a comfort level with the city.’’

The proposal bundles better access for people with disabilities with a thorough modernization of a station that, according to the T, was built in 1897 as Scollay Square Station and was last significantly freshened in 1962, when it was renamed Government Center, to reflect the razing of Scollay Square for Boston’s new City Hall.

It calls for a soaring new glass headhouse — an entrance, in subway parlance — in place of today’s brick bunker, as well as new escalators, elevators, stairs, lighting, and communication systems. The Green Line platforms will be raised so passengers can access vehicles more easily. And the Blue Line platforms will be lengthened to accommodate six-car trains.

Ed Hunter, the T’s director of construction, presented both potential timelines to the board.

Under the longer one, the project would consume more space on the plaza and include construction of a temporary headhouse, which increases the likelihood of running into unexpected utility lines, always a risk when digging in Boston.

“Utilities have not really treated us very kindly in any endeavor that we’ve had,’’ Hunter said.

Most of the work would be done at night, reducing passenger risk but increasing noise to neighbors in the slightly residential area. The station would remain open, but boarding and walking areas would be frequently changed and rerouted. And the T would divert service to buses on 32 weekends.

The alternative would close Government Center to Blue and Green Line passengers seeking to enter and exit, but would limit the busing weekends to six, with the trains otherwise rolling through without stopping. It would allow for two shifts of construction workers at the station. And most importantly, Hunter said, “it’s safer . . . It separates the work from the passengers, and reduces the risk of accident and potential litigation from somebody that wanders into a work area that might not be secure, [and] customer exposure to noise and dust.’’

The T’s last statistical bible, the 2009 Blue Book, found 11,127 passengers a day entering the station or transferring between lines at Government Center; it did not tally exits.

As an alternative, Green Line customers will be able to walk about one-fifth of a mile to Haymarket — cutting across the Government Center plaza — or one-quarter of a mile to Park Street.

For the Blue Line, Bowdoin is about one-fifth mile, and State Street is just one-10th mile. Bowdoin, now open only for weekday commuters, would be open later and on weekends during construction.

Meanwhile, the revamped State Street — which has been under construction for more than six years — is supposed to be finished by the end of this month.

At Registry of Motor Vehicles, average wait times downThe addition of three dozen employees and the promotion of do-it-yourself options online and by phone continue to drive down wait times at RMV branches, Registrar Rachel Kaprielian told the Department of Transportation board last week.

In recent years, the Registry of Motor Vehicles had closed several branches and cut about 50 customer-service positions before partly replenishing the ranks about six months ago. Consistent with recent months, the average wait time for branch visits last month was less than 10 1/2 minutes, down from about 27 minutes in March 2010, Kaprielian said. With the phone center, the average wait for a call to be answered was also about 10 1/2 minutes in March, down from more than 20 minutes a year ago; after being answered, the live calls averaged about three minutes of talk time.

Of 222,503 phone calls received in March, about 63 percent were handled by customer-service employees, 21 percent were completed using self-service menu options, and 16 percent were rerouted to other departments, Kaprielian said.

Davey, a Back Bay resident, said he recently had a seven-minute wait.