A wary Irish welcome for O’Malley, the Visitor

Dispatched to Dublin to assess the clergy abuse crisis, the cardinal has won over many with his warm presence. The harder challenge is the church’s — retrieving the estranged. 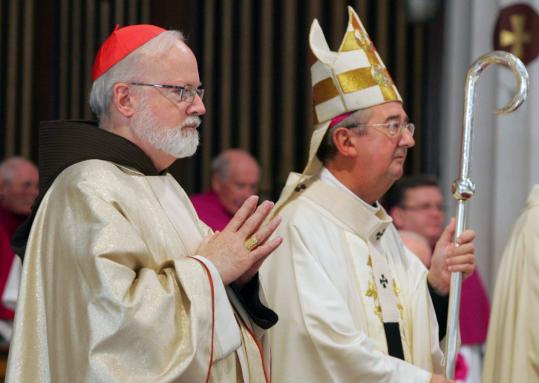 DUBLIN — Cardinal Sean P. O’Malley’s assignment here did not begin well. Asked by the pope to review the Archdiocese of Dublin’s response to the clergy sexual abuse crisis, O’Malley began by introducing himself at a Sunday Mass at St. Mary’s Pro-Cathedral last November. He spoke about his own family’s Irish roots and offered to meet with people who wished to talk.

Standing at the altar alongside O’Malley were two of the auxiliary bishops who had been criticized in a devastating government investigation of the archdiocese.

“That was perceived as an appalling lapse of understanding by the victims,’’ said Maeve Lewis, executive director of One in Four, a leading sexual abuse prevention and victim support organization.

But O’Malley — who had not been involved in planning the service — is used to walking into messes.

In 1992, he was assigned to Fall River, where the Rev. James R. Porter had been accused of molesting more than 100 minors. In 2002, he was transferred to Palm Beach, where two of his predecessors had been accused of abuse. A year later, he was named archbishop of Boston, where Cardinal Bernard F. Law had resigned over an abuse scandal that triggered a national crisis.

In Dublin, drawing on his experience in the United States, he set about meeting with virtually everyone who requested to speak with him. O’Malley and a team of Boston aides met with more than 200 people during three weeklong visits in November, January, and February.

They began early each morning and continued late into the evening, rarely venturing off the grounds of All Hallows College, a Catholic school on a grassy campus in central Dublin. They offered all who met with them a rare opportunity: to convey a message, albeit indirectly, to Pope Benedict XVI.

The cardinal heard unvarnished anguish, those who met with him said, and outrage about the Vatican’s role in the cover-up of abuse. He heard concern from child protection advocates about policies that, while much improved, still have holes. He also heard frustration from priests and laity about the leaders of the church in Ireland.

The world will probably never see what O’Malley writes in his confidential report, which he will submit to the Vatican before Easter. But the pope has promised to release a summary of what he hears from all the foreign prelates he sent to Ireland to study the archdioceses, religious orders, and seminaries.

What it will all amount to is uncertain.

“The big question is what happens when it goes to the Vatican,’’ said the Rev. Tony Flannery, who met with O’Malley as part of a small delegation of the Association of Catholic Priests in Ireland. “If all of this goes to the Vatican and the Vatican does not respond appropriately — indeed, if it doesn’t respond at all — the thing becomes futile.’’

O’Malley, at the Vatican’s request, has repeatedly declined to talk about his work in Ireland — formally called a “visitation’’ by the Vatican. But he offered a general observation about his work on St. Patrick’s Day, speaking at a Mass in Boston’s Cathedral of the Holy Cross.

“I’m very grateful for the welcome that we received,’’ he said in his homily, “ and I pray that the work of the visitation will help to bring healing and renewal to the church in Ireland.’’

In Ireland, O’Malley is reviewing a diocese headed by Archbishop Diarmuid Martin, a controversial figure who has won enormous support from laypeople in Ireland for his startlingly blunt criticism of the church’s handling of abuse and for his cooperation with government investigators. But he has alienated some priests and fellow bishops, who say that he neglected to build relationships with them and that he dealt too harshly with some of the bishops criticized for mishandling sexual abuse cases.

“When I was told [O’Malley] would probably be the visitor to Dublin, I was very happy,’’ Martin said in an interview at the archbishop’s residence in Dublin last month. “He’d had experience and was looked on as someone who had dealt with things in an appropriate way.’’

O’Malley battled skepticism in Ireland about the mission, though. What, many Catholics there wondered, could the visitors possibly learn that had not already been gleaned from thousands of pages of government reports, not to mention documentaries, news stories, and books about the crisis? The pope’s decision to appoint American, Canadian, and British prelates to lead the visitations did not help.

“It’s a typically Irish postcolonial mentality,’’ said Garry O’Sullivan, editor of The Irish Catholic, a weekly newspaper. “On the one hand, we want good governance; on the other, we don’t want anybody else to do it.’’

But as O’Malley began his work, word spread that he was an uncommonly good listener, and unusually easy to talk to. The Rev. Mick Cullen, pastor of a parish in central Dublin, was among those who were initially skeptical but came away “hugely impressed.’’

“He was a gentle, amusing fellow, a very nice guy,’’ he said. “Somebody you felt you could trust. We had a very straightforward conversation with him.’’

And at the beginning of his final trip in February, O’Malley and Martin won praise from many quarters for their “Liturgy of Lament and Penitence’’ at St. Mary’s Pro-Cathedral, attended by more than 400 people. The prelates apologized and asked the forgiveness of God and abuse victims, and they washed the feet of eight abuse victims in a symbolic display of humility and service.

Ireland remains one of Europe’s most Catholic countries; about 87 percent of the population identified as Catholic in the 2006 census. But weekly Mass attendance has dropped dramatically over the last generation. A 1974 survey put the percentage of those attending Mass at least weekly at 91 percent; current estimates vary, but two recent polls put the figure at around 45 percent.

That’s still far higher than the corresponding figure for US Catholics, which is 22 percent, according to the Center for Applied Research in the Apostolate at Georgetown University. But to many Catholics in Ireland, the losses seem dire, and perhaps irreparable.

“The only way to get the church back here is to go house by house, room by room, and evangelize them,’’ O’Sullivan said. “And the problem is you’re dealing with people who have seen the worst, and can care less.’’

Most of the country’s bishops, O’Sullivan said, “seem to be all out of ideas, just worn out, like balloons where all the air’s gone out of them. It’s awful.’’

The cardinal likely heard little agreement from the victims he spoke with about how the church should respond. Victims in Ireland are divided. Some strongly believe the church should at least match the payments made by the government to people who were abused in church-run institutions — estimated to ultimately total more than 1 billion euros. Others have no use for the church at all.

Marie Collins, who was sexually assaulted by a priest as a child and has become one of the country’s most vocal victims of clergy abuse, said she told O’Malley the church should undertake a serious internal review of how, from a moral perspective, the abuse crisis was able to occur.

“Supposedly our religious leaders are people who are more aware of what it says in the Gospels, what Jesus taught, than most of us leading ordinary lives,’’ she said. “Yet when it came to it, the actions they took were totally opposed and conflicted with all their teachings. That’s not a question for lawyers, that’s a question for the church.’’

But Colm O’Gorman, an abuse victim who founded One in Four, said church-run investigations were of little use. The Vatican, he said, has not yet acknowledged its own role.

“This is about naming the lie of the idea that this is an Irish issue, or an issue that requires a visitation to Ireland,’’ he said. “This requires an investigation not by them, but of them, for their negligence on a global scale that has resulted in crimes against tens, if not hundreds, of thousands of children.’’

One of O’Malley’s principal focuses was to learn about the Irish church’s child protection efforts and to suggest improvements.

All 26 Irish dioceses have signed on to new guidelines formulated by the National Board for Safeguarding Children in the Catholic Church, an agency set up by the church to create and oversee a unified child protection strategy.

Concerns remain, however, about how consistently individual bishops are following the rules.

“The real issue still remains that bishops retain quite a great deal of power to make a decision as to whether or not an allegation is credible,’’ said Lewis of One in Four.

The quality of the individuals designated to handle abuse complaints in each diocese also remains a concern, according to both Ian Elliott, chief executive officer of the safeguarding board, and Lewis. In rural areas, the delegates are often priests or lay volunteers with little training.

O’Malley’s mission was pastoral as well as analytical; part of his job was to express the pope’s personal concern for people in Ireland. Some of his liveliest and most personal conversations in Dublin seemed to be with priests.

“He wanted to know about our morale and the well-being of priests in the midst of all the revelations,’’ said the Rev. Joe Mullan, who led a delegation of Dublin priests who met with O’Malley.

For many priests, speaking freely in complete confidence with a senior church official was a unique and unexpectedly satisfying experience. Some shared the acute pain they felt about the crisis, others their frustration at what many feel has been an incoherent response from the church.

Still others spoke about their urgent concern that the church find its way in an increasingly global and secular society — and quickly.

The Rev. Seamus Ahearne, pastor of a parish in a working-class neighborhood in Dublin, was among a number of priests who said they raised concerns that the language and modes of worship feel impossibly archaic and inaccessible to younger people, and that the church — with its all-male, top-down governing structure — must change.

“I’d like to see the clerical church die, and the proper church emerge, the church of the people,’’ said Cullen. “That’s really where we should get our strength. Not this big great organization, but rather a worshiping community that comes together and looks after one another.’’