In a race to get their numbers’ worth

Some towns use Marathon entries to boost local causes 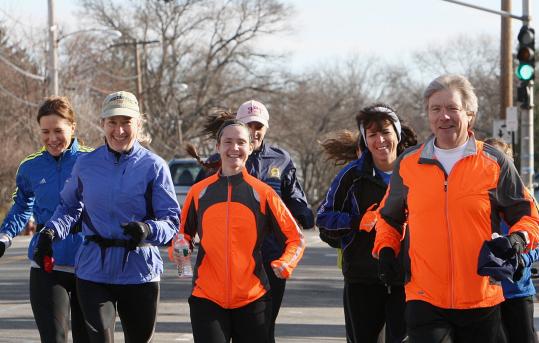 Communities along the Boston Marathon route are getting more serious about how they distribute the invitational numbers they get from the Boston Athletic Association as partial repayment for helping to put on the world-famous race.

The association started handing out the numbers in the mid-1970s on a case-by-case basis, as individual favors to police and fire departments in the eight communities from Hopkinton to Boston.

In most cases, the numbers — which allow a runner to enter the 26.2-mile race without a qualifying time from another marathon — have been given to organizations or people who pledge to raise money for a charitable cause.

Some departments have been better at tracking the fund-raising results. In other cases, the numbers have gone to police officers or their family members who want to run the race, or to a neighboring department that has helped out in emergencies.

But municipal administrators facing ever-greater budgetary needs are moving to maximize the benefits of the prized entries, which are in addition to the Boston Athletic Association’s cash contributions to help offset the costs of hosting the race. This year, the payments range from $35,000 to $76,000 for smaller communities to $254,000 for Boston.

Local officials have typically sought increases in the cash amounts. For example, Natick’s town administrator, Martha White, said her community is among four that are getting a bump this year to $35,000, from $32,000.

Natick is also being joined by Ashland, Framingham and Wellesley in arranging for their invitational numbers to be given to their town administrators for distribution, rather than the local police and fire departments.

“The four towns kind of banded together and reached out to BAA to communicate with us better,’’ White said.

“Initially we were looking to up their cash contribution, then we started to explore other ways our communities could better benefit. We came up with the idea of getting invitational entries to town administrators,’’ she said.

Thomas Grilk, the association’s executive director, said the shift to giving the invitational numbers to the town officials is part of the BAA’s effort to “regularize’’ their distribution.

“It’s something evolving over a period of time,’’ Grilk said.

After they leave the BAA’s control, however, how the numbers are given out to runners is left up to the communities.

Ashland has set up a website to tell citizens what’s happening with the 20 numbers it’s getting. The invitational runners must each raise at least $2,500 for a local cause, with the funds helping such programs as the town’s food pantry, youth and family services, outreach to senior citizens, and the emergency fund for families in need. Funds have also been used for public safety, and for community enrichment through the public library.

“This system is new this year as to collecting funds for the invitational numbers in a systemic way,’’ said Town Manager John Petrin. “In prior years the numbers were issued to police and fire departments rather than to the town. Last year was the first year that any money was raised, and the police and fire raised $10,922 for community programs.’’

In Natick, six of the town’s 20 numbers have been given to the Michael Carter Lisnow Respite Center, a Hopkinton-based organization that provides support for people with disabilities. The center uses the numbers to raise money. Two of the town’s numbers go to the Police Department, and 12 are earmarked to help fund the town’s food-assistance Healthy Pantry Initiative, and a visit by “The Moving Wall,’’ a traveling replica of the Vietnam War memorial in Washington, D.C.

Runners who get one of the 12 numbers, which are given out on a first-come, first-served basis, must commit to raising at least $1,500 for one of causes, although White said she hopes they’ll bring in more.

In Wellesley, selectmen have set aside 10 of the town’s 20 numbers for the Fund for Wellesley, which helps finance a variety of community service programs and projects. Runners who get a number through a lottery must commit to raise at least $2,500.

Wellesley’s invitational numbers have also been awarded to the Miles for Miracles program at Children’s Hospital Boston, and to the Lisnow Respite Center. Two numbers go to Wellesley public safety employees.

Framingham also gets 20 numbers. The Board of Selectmen distributes five, with each member choosing a recipient, and Town Manager Julian Suso assigns one.

Suso’s choice will benefit the Matty Eappen Foundation, a nonprofit organization that works to prevent cases of abusive head trauma. It was started in the wake of 8-month-old Matthew Eappen’s fatal head injury in 1997 in Newton, and the highly publicized trial of the family’s au pair, Louise Woodward, in his death.

The other 14 Framingham numbers will go to the Police and Fire departments.

According to Fire Chief Gary Daugherty, last year the department used its four numbers to fund scholarships and new equipment for its fitness program. One Fire Department runner raised approximately $2,300 for “our physical fitness program, which we used to purchase a new treadmill and stationary bike,’’ he said.

Framingham Police Chief Steven Carl said that he received 10 numbers this year, about the same as last year. A decade into his tenure as chief, Carl said he’s never seen them as being intended to go to charities.

“The first year, I had to call the BAA and ask what I’m supposed to do with them,’’ he said.

While Carl gives two to three per year to the Matty Eappen Foundation (he said Eappen’s story has a special resonance for law enforcement officers), he reserves the others for town and regional police officers, and their families.

“I’m not into the foundations, and raising money, and stuff,’’ Carl said, citing the time constraints of running the department. “The intent of these numbers is to let these guys run. I’ve never believed it was to go to anything outside the scope of law enforcement. I try to get rid of them quick as possible.’’

The other three communities offer a mix of distribution practices.

Brookline gives its 15 numbers to the Brookline Community Mental Health Center, which uses them to raise approximately $50,000 annually. Selected runners each pledge to raise a minimum of about $3,000 to wear the bib, said Cindy Price, the center’s executive director.

Newton gives out its 10 numbers in order of requests, and a city spokesman said “the vast majority’’ have traditionally gone to benefit charitable causes. Specific information about what has happened with the numbers in recent years was unavailable.

Newton appears to be planning to take the numbers more firmly in hand next year, however. It will distribute the bibs in a raffle, according to Aaron Goldman, Newton’s citizens assistance officer.

In Hopkinton, the starting point for the Marathon, the town this year received 28 numbers, while the Hopkinton Athletic Association has 15 to distribute.

Town Manager Norman Khumalo said the Fire Department gets four of the numbers.

Historically, according to Fire Chief Ken Clark, the department has raised $2,000 to $4,000 per number, and directs the money to the Lisnow Respite Center and to the Milford Regional Medical Center’s emergency department, which helps Hopkinton host the race.

Hopkinton police get 22, with about half used to raise funds for programs such as the Lisnow Center, but the department does not track the proceeds. Lieutenant Chuck Wallace said the department’s remaining numbers go to “police officials in towns that support our security efforts by sending us police resources and equipment.’’

The town’s Friends of the Hopkinton Senior Citizens received two invitational numbers this year, according to Cindy Chesmore, its director, and they are continuing their annual fund-raising, which has generated nearly $8,000 since 2008.

At the Hopkinton Athletic Association, Tim Kilduff has been working since 1996 to direct the invitational numbers toward fund-raising for town services and area nonprofits.

The group, which Kilduff helped to form, has used its numbers to raise an annual average of $25,000 over the past 10 years, he said.

“From our point of view these numbers are invaluable,’’ Kilduff said. “To go out and raise $30,000 would take a lot more effort. Try to replicate that by selling T-shirts.’’

One Hopkinton Athletic Association runner is Steve George, an accountant from Abington.

George has committed to raise at least $2,500 for research efforts into amyotrophic lateral sclerosis, or ALS, with his invitational number. His pledges will go to the Hopkinton-based Sharon Timlin Memorial 5K Race organization and the Angel Fund, a Boston-based charity that raises funds for ALS, also known as Lou Gehrig’s disease.

“I have a brother who has ALS,’’ George said. “This is something I have wanted to do, to run for an ALS-related organization.’

The numbers given to towns and cities are among approximately 5,700 invitational numbers that the BAA distributes, most of which go to nonprofit groups and corporations. The Marathon draws some 27,000 runners from around the world each year.

Grilk, with the Boston Athletic Association, said the numbers are part of the payment that it provides to towns and cities along the route.

“The conducting of the Boston Marathon is not something the BAA does alone,’’ said Grilk. “They share the work, the toil, the pain, the angst, and the discomfort that can go along with putting this thing on. If they’re going to share in that, it is only fair they get some modest share in deciding who’s at the starting line.’’

Boston receives 300 invitational numbers, with City Hall handling 200 of them and the rest going to the Police and Fire departments.

Christopher Cook, Boston’s acting director of arts, tourism and special events, said city officials have a policy of not giving the bibs out as fund-raisers, but reserve them for “people who are avid runners who didn’t get to do the qualifying stuff.’’

The Boston Fire Department distributes its 20 numbers to firefighters who agree to raise funds for the Dorchester-based Kenney-Quinn-Ford Brain Tumor Foundation for Research. Last year, according to the foundation, department runners helped raise $35,000.

The police force’s invitational numbers end up with the Boston Police Department Runners Club, said Officer James Kenneally, spokesman for the department. The club has used the numbers to raise funds “that go directly back to the community,’’ according to a posting on the department’s news blog last year.

Coveted
invitations
The Boston Athletic Association provides a total of 448 entries to the communities along the Boston Marathon’s route.