New stage for a seasoned performer

In pick of Meade for BRA, savvy counts the most 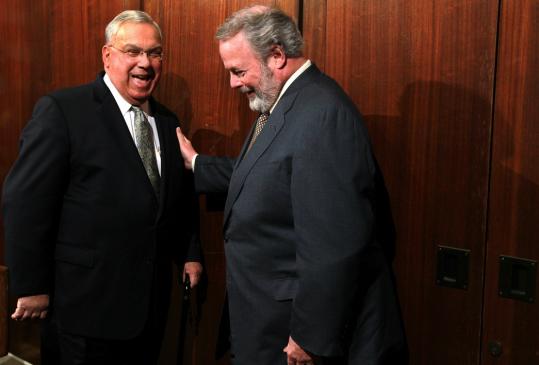 Mayor Menino said “me” when Peter Meade was asked why he would return to City Hall. (Pat Greenhouse/ Globe Staff)
By Noah Bierman and Casey Ross Globe Staff / April 6, 2011

Mayor Thomas M. Menino promoted his choice of a longtime political player to head the city’s powerful planning agency yesterday, insisting that Peter Meade’s knowledge of Boston trumps his lack of professional planning experience, as the city struggles to reemerge from a development slump.

Meade is known as the insiders’ insider, a top Kennedy family confidant. He has been a public relations man, a member of boards at the state’s highest reaches, a media personality, and a Zelig with a role in nearly every civic cause, including the financially troubled park above the Big Dig. Many of his political associations go back four decades, to the last time he officially served a Boston mayor, Kevin H. White, in the 1970s.

At 65, Meade strikes some as an unusual choice for a full-time job planning the city’s future development. Critics have long said the city needs a professional planner to lead the Boston Redevelopment Authority, which oversees changes to the city’s skyline, its historic neighborhoods, and its commercial districts.

Meade’s admirers, who include influential business and political players, say his political savvy and thick Rolodex will allow him to help carry out Menino’s vision. Meade will oversee the agency at a critical time, as the city emerges from a recession that has halted development and stifled attempts to revamp Downtown Crossing, Dudley Square, and other depressed areas.

“He’s a consummate person at making things happen in the city,’’ said Marc Draisen, executive director of the Metropolitan Area Planning Council, who served with Meade as a junior aide in the White administration. “That’s kind of what you need to do at the BRA. You need to figure out how to move a development agenda where there are a lot of conflicting agendas involved.’’

Meade, who will earn $164,640, was asked yesterday in an interview in the mayor’s office why he would return to City Hall after 34 years and as he nears retirement. But his new boss interrupted and answered the question for him.

Meade quickly backed the mayor. “He’s right,’’ Meade said. “Tom and I talk about this city a lot. We talk about how much better this city is today than when we were kids growing up.’’ In the end, Menino’s call to duty was persuasive.

BRA officials say Meade will not receive a traditional pension for his new job because he cashed out benefits from his seven-year tenure under Mayor White. He will instead receive a retirement plan similar to a 401k.

One of Meade’s most significant forays into the real estate world, his effort to establish the Rose Fitzgerald Kennedy Greenway in downtown Boston, has produced mixed results. The Greenway is a vast improvement over the old elevated highway that used to divide the city, but Meade and its other managers have not been able to generate enough funding to maintain its high-end fountains and lighting systems and make improvements to attract more visitors.

In February, Meade stepped down as chairman of the Greenway Conservancy, the nonprofit that manages the park system, saying it was time for him to move on after more than six years. But his new job as BRA director puts him back at the center of debate about its future.

Meade is sensitive to criticism of the Greenway. “Somebody was once complaining to me about the Greenway, and I apologized for it and said, ‘If you like, I could see what we could do to bring the highway back,’ ’’ Meade said.

Even those who say the Greenway has not yet fulfilled its promise are hesitant to blame Meade. Nancy Caruso, a North End activist, says there is a lot of work left to do on the Greenway, but Meade’s job was a tough one.

“People who are not involved in the inside of it don’t understand all of the personal vendettas involved among a whole strata of people,’’ Caruso said. “He went through all that and used his own good judgement. Frankly I’m going to pray for him in his new job that he doesn’t get mired in the minutiae of all the constituencies pulling him in different directions.’’

Meade also recently left a post as president of the Edward M. Kennedy Institute for the United States Senate after just 18 months on the job. At the time, he denied that there were tensions with Kennedy’s widow, Victoria Reggie Kennedy.

While the Greenway has remained nettlesome, Meade has been successful in other real estate pursuits. He has long served as chairman of the board of trustees at Emerson College, helping to guide the school’s effort to move its campus from Beacon Street to the Theatre District, revitalizing an area that had been languishing. (He said yesterday that he will resign from Emerson to avoid a conflict of interest.)

“People are going to fire rifle shots and say he doesn’t know real estate, but Peter was catalytic with the efforts at Emerson and he knows the neighborhoods really well,’’ said Kevin Phelan, an executive of the real estate firm Colliers International who has known Meade for years. “He has the trust and confidence of the mayor, and I think you’ll see a great sense of independence that Peter will have with this agency.’’

That would be a dramatic shift from recent years when Menino has exercised significant control over decision-making at the agency.

“Things won’t change at the BRA until the mayor changes,’’ said Sam Yoon, a former city councilor whose failed mayoral campaign featured a strong critique of the agency and Menino’s role.

Menino said Meade’s primary assets on the job will be his ability to work with younger planners on the BRA staff, while mixing with players in the development community.

“He can call any CEO in Boston, and they will pick up the phone,’’ Menino said.

Jon B. Hurst, president of the Retailers Association of Massachusetts, would like Meade to infuse Downtown Crossing with new energy. Hurst, who clashed with Meade over health care costs when Meade worked as an executive for Blue Cross Blue Shield, said the BRA appointment took him by surprise.

“I think he brings a skill set that can help,’’ Hurst said.

Andrew Ryan of the Globe staff contributed to this report. Bierman can be reached at nbierman@globe.com; Ross at cross@globe.com.