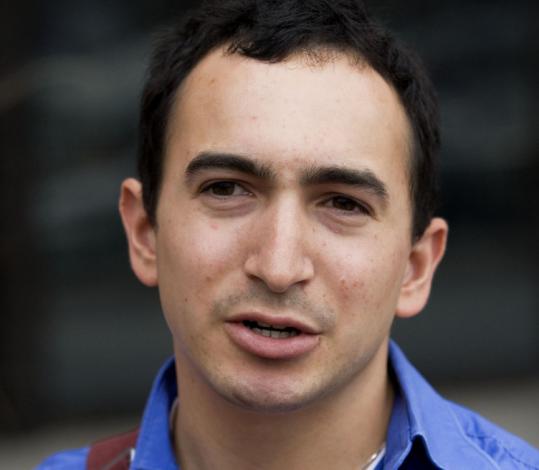 They arrived at the federal courthouse in Boston by the busload or joined a Facebook support group promoting the cause. If there is a legal fight that can define their generation, this is it.

Dozens of aspiring lawyers in their 20s crowded the John Joseph Moakley United States Courthouse yesterday to witness arguments before the First Circuit Court of Appeals in an illegal downloading and sharing lawsuit brought against a Boston University student by the music recording industry, the first case of its kind to reach the federal appellate level.

One of the lead lawyers was Jason Harrow, a student at Harvard Law School and winner of the school’s 100th annual Ames Moot Court Competition, judged by Supreme Court Chief Justice John Roberts. Harrow argued that Congress never intended to punish individual consumers when passing a copyright bill more than a decade ago.

“No one thought the statute would apply to consumer users like this,’’ Harrow, 27, told the court.

At issue is how much Boston University graduate student Joel Tenenbaum will have to pay after admitting in July 2009 to illegally downloading and sharing 30 songs on the Internet.

Tenenbaum, who attended the hearing, said he was impressed by the show of support, saying it was testimony to the importance of the case.

A federal jury awarded the Recording Industry Association of America, representing four recording companies, $675,000 under copyright laws and the Digital Theft Deterrence Act of 1999, which allowed for penalties as high as $4.5 million, or $150,000 for each song illegally and willfully downloaded and shared online. The laws required that jurors award at least $750 for each infringement.

Last year, US District Court Judge Nancy Gertner slashed the award by 90 percent to $67,500, or $2,250 a song, saying the jury’s decision was “unconstitutionally excessive.’’

The $67,500 would still serve to deter similar actions, she said.

But lawyers for Tenenbaum — Harrow and Harvard professor Charles Nesson — argued yesterday that the federal copyright laws and the Digital Theft Deterrence Act were never meant to target consumers and that, even if they were, such extreme punishment would be unconstitutional. Nesson described Tenenbaum’s knowingly downloading songs to the act of “a willful jaywalker.’’

Lawyers representing the Recording Industry Association of America argued yesterday that Congress was aware that consumers could be targeted under the deterrence act and that the penalties were set high because of the seriousness of the misconduct.

One of them said the economic impact of illegally downloading is far greater than the sharing of one song.

Clement also argued that a district court judge should not have altered a jury’s decision.

The three-member Court of Appeals took the matter under advisement.

Tenenbaum’s case is the first to move on to the appellate level. A Minnesota woman, Jammie Thomas-Rasset, faced similar allegations and is fighting the recording industry in a third trial, after verdicts were overturned and settlements turned down in two previous trials.

Tenenbaum, a 27-year-old Providence native and a Boston University doctoral student in physics, has said that he had offered to settle for several thousand dollars, to no avail. He has also said that a $67,500 judgment would force him into bankruptcy. His lawyers now propose a judgment of $21, or 70 cents a song if he had bought them on iTunes.

Tenenbaum said yesterday after the hearing that he was impressed by the outpouring of support at the courthouse by people his age who have the same passion for the legal issue at stake that he has.

One striking example of the complexity of the case and the generation gap at issue, he said, was that one of the circuit judges had to ask how the file downloading and sharing programs work.

“That’s really the crux of the issue here,’’ Tenenbaum said. “That was the center of the whole argument: Was Congress even aware of file sharing’’ when it passed the deterrence act.

Nesson said yesterday that the case owes much to student interest and involvement, with law students helping to study case law, prepare briefs, and practice arguments.

“The issue that is at stake here is the future environment they live in, not just as students, but as lawyers,’’ he said.