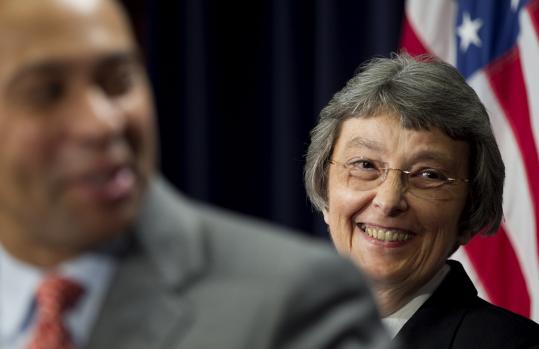 If confirmed, Lenk would be the first openly gay member of the Massachusetts high court and just one of a handful of openly gay state supreme court justices in the country, according to gay rights advocates.

Both Patrick and Lenk acknowledged the groundbreaking nature of the appointment, but stressed her qualifications, including 17 years on the bench, a Harvard law degree, and a doctorate from Yale in political philosophy.

“It’s a nice coincidence and a happy one,’’ Patrick said of Lenk’s potential to make history. “I love the idea of firsts, as you know, and I’m proud of this one. But first and foremost, this is a very well prepared and highly qualified candidate.’’

Lenk, a 60-year-old Carlisle resident, spoke yesterday of her desire to “bring with me the sympathy and understanding of one who’s experienced a full life, from inside and outside the mainstream.’’

“As a judge, my only allegiance is to the rule of law and to fair and equal treatment of all who come before the court,’’ she said.

Lenk also spoke about her impoverished upbringing in New York, the daughter of a bookbinder and a housekeeper whose first language was Polish. “I never expected to be standing here, but the fact that I am shows that my story is the American story, where anything is possible,’’ she said.

In addition to the diversity Patrick has brought to the court, he has made compelling life stories a hallmark of his appointments.

Lenk’s nomination comes after the governor elevated Roderick L. Ireland to be the first African-American chief justice of the SJC, and appointed Fernande R.V. Duffly as the high court’s first Asian-American judge.

Patrick, a Democrat, is nominating Lenk to fill the seat held by Justice Judith A. Cowin, who announced in January that she plans to step down from the bench this month. Prior to that, Patrick named three other justices to the court, Ralph D. Gants, Margot G. Botsford, and Duffly. If Lenk is confirmed, Patrick’s appointees would fill four of the court’s seven seats.

A specialist in civil litigation and First Amendment issues, Lenk was a partner at Brown Rudnick Freed & Gesmer before she was appointed to the Superior Court in 1993 by Governor William F. Weld, a Republican. In 1995, Weld elevated her to the appellate court.

She applied to fill an SJC vacancy in 1996, but did not make the short list that year. In 1999, she was one of 15 finalists for two SJC vacancies.

Lenk has authored more than 200 appellate decisions, and has participated in hundreds more under the appeals court’s system in which judges sit in panels of three to decide cases.

She made news in 2009 when, writing for a three-judge panel, she refused to reinstate the conviction of a former Pittsfield man initially convicted of molesting five children at a day-care center.

Lenk, agreeing with a lower court that ordered a new trial, wrote that the defendant received an unfair trial because his lawyer was incompetent and the prosecutor had inappropriately inflamed the jury’s passions.

In 2003, she upheld the conviction of a Wellesley man who tried unsuccessfully to disable a parking meter with a pair of pennies. The man argued that because he failed to break the meter he was not guilty of “wanton destruction.’’

But Lenk upheld the $250 fine, throwing in a pun: “When the defendant decided to put his two cents in,’’ she wrote, “he was indifferent to the meter’s inner workings, to how long the meter would remain out of order, and to the repair measures that would be necessary to fix what he wrought.’’

The Boston Bar Association, the Massachusetts Bar Association, and other legal groups praised Lenk’s intellect and experience, as did appeals court Chief Justice Phillip Rapoza, who said in a statement that “she sees the law as a great equalizer.’’

Lenk’s nomination requires confirmation from the Governor’s Council, an elected body that has given Patrick’s judicial nominations more scrutiny in recent months.

Kris Mineau, president of the Massachusetts Family Institute, an active opponent of gay marriage, said “it seems that she certainly has strong qualifications for the court.’’ But, he said, his group is concerned Lenk may be partisan on gay rights issues.

Gay rights groups said Lenk’s nomination has broken a glass ceiling, and is all the more meaningful on a court whose ruling made Massachusetts the first state in the nation to legalize gay marriage in 2004. “I think it will bring home to her in every decision that the cases have real meaning in people’s lives,’’ said Vickie Henry, senior staff attorney for Gay & Lesbian Advocates & Defenders, who has known Lenk for a decade.

But Henry, like other advocates, was careful to stress that Lenk’s history-making status was not her sole qualification. “She’s just a great judge and she happens to be a lesbian,’’ Henry said.

Lenk’s spouse, attorney Debra Krupp, and their two teenage children were acknowledged at yesterday’s announcement at the State House. At the event, Lenk was asked to reflect on her ascension to the same court that allowed her to legally wed.

“Its basic premise [is] that our constitution stands for equality for all people,’’ she said. “But it’s not the only decision that has had an impact on my life, or my life as a citizen, or the citizens of the Commonwealth.’’

Michael Levenson of the Globe staff contributed to this report. Noah Bierman can be reached at nbierman@globe.com.