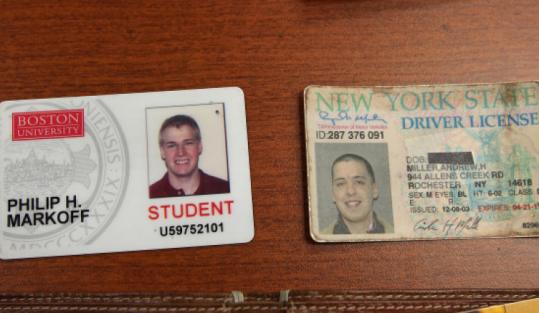 The mother of a young woman who was gunned down in a Boston hotel by Philip Markoff says a New Hampshire gun store should be held accountable for selling the murder weapon to the man dubbed the Craigslist killer.

During a telephone interview from her New York home, Guzman, speaking in Spanish, said the gun sellers “destroyed my family.’’

“They destroyed me by selling that gun,’’ she said. “With that gun they killed my daughter, my treasure.’’

Markoff, living in Quincy, bought the 9mm pistol Feb. 23, 2009 at the State Line Gun Shop in Mason, N.H., using another man’s New York driver’s license and falsely saying he attended college in New Hampshire, according to reports from the US Bureau of Alcohol, Tobacco, Firearms, and Explosives that were among the files released last week.

Suffolk District Attorney Daniel F. Conley said Friday, “This is an example of how lax gun laws in New Hampshire can contribute to gun violence in Massachusetts.’’

He said the gun used to kill Brisman was among 105 firearms bought in New Hampshire and used in Massachusetts crimes in 2009.

The owner of the State Line Gun Shop, Paul Gauffin, declined to comment Friday. “There really is nothing to say at all, ‘’ he said.

Boston attorney Djuna Perkins, who represents Brisman’s mother, said she believes the reports show the gun shop was negligent, and she has urged the US attorney’s office in New Hampshire to reconsider its decision last year not to pursue criminal charges against the owner for failing to verify Markoff’s identity.

“The gun dealer should definitely be held responsible for not adhering to the standards they are supposed to adhere to to protect the public,’’ Perkins said.

Assistant US attorney Donald Feith, who is chief of the criminal division in the New Hampshire US attorney’s office, said Friday that the office concluded no criminal charges were warranted againt the gun shop after reviewing the case last year and has no plans to revisit it.

“It’s an unfortunate set of circumstances, but there doesn’t appear to be any intentional conduct on the part of the dealer,’’ Feith said. “There’s not a lot a dealer can do if the person is intent on getting the firearm and is lying about it in a convincing way.’’

A clerk at the gun store initially told ATF agents in April 2009 that he did not remember anything about the sale of the firearm that police found hidden in a copy of “Gray’s Anatomy’’ in Markoff’s Quincy apartment. But a week later, the clerk told agents he recalled that Markoff presented an out-of state license and said he had just moved to the state and was attending college, according to the reports.

The New York driver’s license used by Markoff belonged to Andrew H. Miller, an Air Force airman who was stationed in California at the time of Brisman’s slaying. He told agents he lost the license in 2005 while attending the University at Albany-State University of New York. Markoff attended the college at the same time, but Miller said he did not know him, according to the reports.

“The photo on that license does not look like Philip Markoff at all,’’ said Perkins. That should have raised suspicion at the gun shop, she said.

Instead, the store clerk advised Markoff to go to the town clerk’s office and get a notarized residency affidavit, which the gun shop would accept as proof he lived in New Hampshire, according to reports.

Markoff went to the Nashua city clerk’s office, where an employee notarized an affidavit he signed falsely indicating that he was Miller and that he was attending Daniel Webster College in Nashua. On the affidavit, Markoff misspelled his fake identity, printing the first name, “Anndrew.’’

During an April 2009 interview with agents, Nashua deputy city clerk Patricia Piecuch said people were not required to provide supporting documentation that they resided in the town to get the affidavit notarized.

In an interview Friday, Piecuch said the city still does not require people, who could be prosecuted for perjury if they lie on the affidavits, to show proof of residency. However, she said city officials have amended the forms to indicate they are only intended as proof of residency for those seeking motor vehicle licenses or registrations.

Conley said Markoff should have been required to show proof that he was a student, whether it was a college identification or a letter from a dean. “That’s not too burdensome, in my opinion,’’ he said.

An hour after the gun store clerk advised Markoff to get the residency affidavit, he was back at the shop with the paperwork.

The records show that Markoff checked off a box on the firearms transaction record indicating he was not the actual buyer of the firearm, which should have prevented the sale.

“Certainly there were some red flags that should have been seen by people in New Hampshire,’’ Conley said. “It’s very troubling that it’s so easy for people to get a firearm there.’’

Maria Cramer of the Globe staff contributed to this report. Shelley Murphy can be reached at shmurphy@globe.com.

Listen to excerpts from a police interview with Philip Markoff

Listen to excerpts from a police interview with Megan McAllister, Markoff's ex-fiancee

Timeline in photos:
The Craigslist attacks