Despite frequent floods, no plan yet for Winthrop 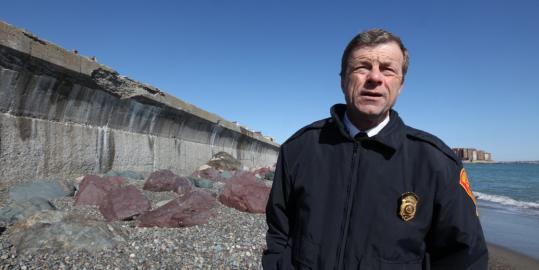 WINTHROP — To examine the mile-long interconnecting sea walls along Winthrop Beach, one has to traverse a handicapped-access ramp that was sheared in half by a high tide at least a decade ago.

Past a crumbling concrete path lies the beach, where millions and millions of stones rise up in 10-foot piles and mimic sand dunes. Only after climbing over the mounds of stones and boulders can one see the sea wall — lined with cracks and sprouting numerous gouges, some as deep as 2 feet, reminders of the pounding surf that has removed nearly all of the sand from this once popular coastal strip and made it a ghost beach.

On paper, the state has committed $7 million in future funds to repair the beach’s sea walls and jetties. But at this point, no one knows when that will happen because there is no current plan in place to renovate the beach.

“I’ve absolutely lost faith in the state. They let us all down,’’ said Cheryl Tobey, who lives across the street from the beach. She has worked for more than a decade to lobby state officials to repair the beach — which has suffered from severe erosion since 1978, when parts of the sea walls collapsed, and sidewalks and roads broke apart, leading to massive coastal flooding.

The state’s Department of Conservation and Recreation, which oversees the beach, proposed renourishing the 37-acre site with 500,000 cubic yards of sand and gravel — essentially creating a new coastal strip, where the sand could be the first defense in high tides during storms.

The plan, which had been in the works since 1997, called for pumping the sand up from the ocean floor — about 9 miles off the coast of the town — and repumping it onto the beach from a barge. But citing possible harm to lobster and cod populations at that offshore location, the US Army Corps of Engineers rejected the proposal in 2008 and also turned it down during an appeal last year.

After spending $2.6 million on engineering studies and permitting — and about $600,000 on emergency sea wall repairs five years ago — the DCR is working on a new proposal for the beach. DCR spokesman Joe Orfant, who has worked on the renovation proposals for 14 years, said a new plan could be in place in the fall, but he declined to reveal any details. “I don’t know what kind of environmental issues we’re going to run into with this, so I really can’t give you a real schedule,’’ said Orfant, who didn’t rule out trucking sand into the town to create a new beach.

But in a 2006 report, the DCR detailed some of problems associated with bringing the sand to the beach via the mainland. The DCR estimated that it would take 33,000 truck trips to deliver the sand, and could push the project up to 42 months — versus two months if the dredging and pumping had been allowed.

Once a playground for the elite, who traveled from as far as Chicago to spend time at the hotels that lined the beach in the early 20th century, the beach has been eroding over the past century, said Orfant. The process was accelerated by the installation of walls that were put up around Winthrop Highlands, which removed the source of natural sediment that once helped create the beach.

While there is no safe access to the beach, visitors can find evidence of what waves can do to manmade structures. In addition to the holes in the sea wall and the destruction of the handicapped ramp, a large concrete boat launch has been inoperable for at least 20 years — sliced in half by the surf. The old slabs have separated and the steel support girders stick up in the air, exposing rusted wire.

Despite the lack of sand, Orfant believes Winthrop Beach’s sea walls are sound. But Winthrop Fire Chief Paul Flanagan said the sea wall needs to be replaced. Last month he toured the beach, pointing to the cracks and deep crevices that sit right below the sea wall’s surface. “This sea wall’s done,’’ he said. “If we were to lose a piece of this wall on the first tide cycle of a two or three-day nor’easter, the waves would be hitting the houses and doing structural damage. It’s always a concern of ours.’’

During bad storms, winds can approach 60 miles per hour, with waves towering as high as 60 feet in the air, said Flanagan, who grew up about 100 yards away from the beach. At least a few times each year during storms, waves up to 3 feet high spill into the neighboring streets, causing the area to flood, and forcing homeowners to pump out their waterlogged basements.

Tobey has lived across the beach for more than 50 years, but she no longer visits it. When the sky turns dark, she constantly monitors the weather. When storms approach, she surrounds herself with meteorological charts. “It’s unnecessarily terrifying,’’ she said. “My biggest fear is that there is going to be a storm that isn’t a quick mover and the ocean is going to churn for several tides and it’s going to destroy the houses along the beach.’’

Globe North
Globe South
Your comment is subject to the rules of our Posting Policy
This comment may appear on your public profile. Public Profile FAQ