Wampanoag embroiled in a battle over fishing 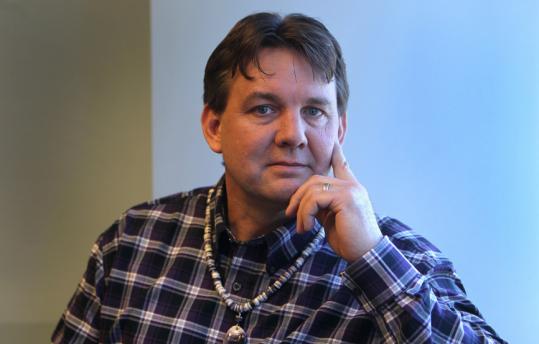 David Greene, a member of the Mashpee Wampanoag tribe, says he was discriminated against when he was told he couldn’t fish off Mattapoisett. (John Tlumacki/Globe Staff)
By David Abel Globe Staff / April 1, 2011

On a serene afternoon last October, David Greene waded into the waters off Mattapoisett with a rake, basket, and an appetite for quahog.

As a member of the Mashpee Wampanoag tribe, he had spent years fighting in courts to secure the right to fish there and take whatever he could collect from the seabed, no matter the size of the shellfish, he says.

As the sun began to set, Kenneth R. Pacheco, then deputy shellfish warden of Mattapoisett, rolled up to the beach off Reservation Road in his patrol car and called out to Greene and a friend with him, asking to see their fishing licenses. The warden suggested that Greene was violating town rules by not properly measuring the shellfish and using an oversized basket; Greene insisted Pacheco had no right to tell him how to fish or what he could take.

The heated exchange devolved into pushing and shouting. Pacheco, 66, threatened to arrest Greene, and Greene, who is 46, accused Pacheco of assault and battery.

This week, having previously pressed criminal charges against the warden, Greene filed a lawsuit in Plymouth Superior Court, arguing that Pacheco and the town violated his right to fish “without interference, obstruction, or regulation by any governmental authority other than the sovereign Wampanoag Tribe.’’

“Fishing is part of my life, my culture, and my religion,’’ Greene said in an interview this week. “It’s an important part of who I am. I have the right to hunt and fish, without interference, and to have someone verbally and physically attack me is unacceptable.’’

In 1999, four years after Greene was convicted of violating shellfish regulations in Bourne, the Supreme Judicial Court affirmed a ruling by the Massachusetts Appeals Court, which overturned his conviction and found that Greene, as a Wampanoag, possessed “aboriginal rights to fish even in the absence of treaty protection,’’ according to the lawsuit.

Michael Gagne, administrator of Mattapoisett, said the town requires those fishing in its waters to obtain licenses that regulate the number of clams they can catch, their size, where and when they seek them, and what methods they use.

“The criteria we use tries to encourage the perpetuation of the stock, so people can continue to enjoy them for years to come,’’ he said.

Gagne said Pacheco, who spent about 30 years as a police officer in Mattapoisett before he became a warden, is no longer employed by the town, although it is continuing to represent him. He said Pacheco retired shortly after the incident. Pacheco did not return calls.

Gagne declined to comment on the lawsuit. “The claims that are being made are very complicated, but I’m not going to comment on pending litigation,’’ he said.

He referred questions about the lawsuit to the town’s lawyer, David Jenkins, who said Pacheco only sought to check Greene’s catch because his oversized basket did not comply with local regulations. He said Pacheco asked Greene to give it to him eight times, before Greene allowed him to inspect it.

“Greene had an illegal basket,’’ Jenkins said. “Massachusetts law gives wardens the right to inquire of anyone shellfishing that they are complying with local law. There is no statute in Massachusetts that says Native Americans have an unfettered, unrestricted right to fish or hunt. The Division of Marine Fisheries has issued no policy to local wardens giving Native Americans unfettered rights to fish or hunt.’’

He added: “The town’s position is that local regulations apply to Native Americans as much as they apply to anyone else.’’

State officials said they know of no specific shellfishing regulations that would prevent towns from requiring tribal members to obey their rules.

“Neither the Department of Fish and Game nor its Division of Marine Fisheries has regulations that specifically addresses tribal fishing rights,’’ said Catherine Williams, a spokeswoman for the Division of Marine Fisheries. “The division’s role is to work with municipalities to develop their local shellfish management plans, not to enforce local shellfishing rules and regulations.’’

Tuesday, at the offices of a Boston law firm representing Greene, his attorneys showed a video of the altercation, taken by Greene’s wife, Kathleen, who was on the beach that afternoon last fall, watching her husband collect what they hoped would be their dinner.

The video, taken with a cellphone, shows Pacheco first asking Greene’s wife if the men in the water had licenses for shellfishing. She explained that the friend, Paul Brown, had a license from the town and that her husband was “an Indian.’’

Shortly afterward, Pacheco and Kathleen Greene began to argue as Pacheco insisted that Greene “had to follow the rules,’’ even if he was allowed to collect clams. She told Pacheco her husband served on the tribe’s fish and wildlife commission and was well aware of his rights.

“I don’t know, but he can’t fish here,’’ Pacheco said, according to the lawsuit.

Pacheco signaled for Greene to come to the beach with his basket. When he arrived, Greene and Pacheco began to shout at each other. Greene said Pacheco had no right to inspect his basket, which was filled with quahogs.

After more shouting and a phone call Greene placed to an official at the marine fisheries office, Pacheco told Greene the shellfish he had were too small and that he would be arrested if he did not surrender his basket.

“In doing so, Mr. Pacheco struck Mr. Greene in the throat with his forearm, knocking him backward and off balance,’’ the lawsuit said. The images on the video made it look more as if the two were shoving each other.

Pacheco confiscated the basket and the quahogs.

“Throughout the incident, Mr. Pacheco differentiated between Mr. Greene and Mr. Brown, singling out Mr. Greene for violent treatment while leaving Mr. Brown, who he knew was not Native American, basically alone,’’ according to the lawsuit.

Shortly afterward, Greene filed charges in Plymouth District Court, accusing Pacheco of assaulting him based on his national origin. There was a hearing on that case last month.

Pacheco is scheduled to be arraigned April 8.

The civil complaint filed on Tuesday against Pacheco and Mattapoisett contends that the town failed to properly train Pacheco or enact regulations that protect the rights of the Wampanoag.

“It’s somewhat hard to believe that in 2010, after the decisions of the SJC and various proclamations of the Commonwealth recognizing aboriginal rights, that an incident like this could take place,’’ said Howard Cooper, a lawyer for Greene. “In the minds of the Mashpee Wampanoag, this is an incredibly important issue. There should be absolutely no misunderstanding that the tribe has never waived, compromised, or in any fashion ceded the rights they had to fish before the first settlers came to the continent.’’