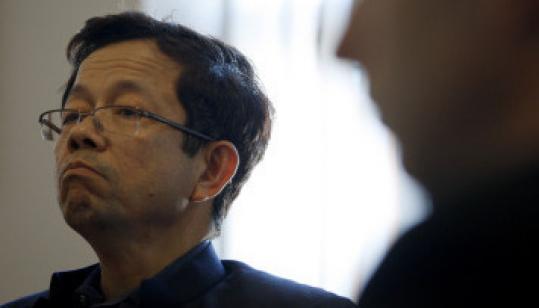 Lowell police Officer Brian M. Kinney was working the night shift three years ago when he was called to investigate a report of an unwanted person on private property.

He arrived to find Vesna Nuon, 43, a Cambodian father of two, who according to the police report, appeared to have been drinking, was belligerent, and refused to return quietly to his friend’s house.

“You’re a coward, hiding behind your badge,’’ Kinney said Nuon yelled as he stood outside the house. “Get off my property.’’

Kinney arrested Nuon on charges of disorderly conduct, forcing him to spend several hours in a city jail. The following week, the charges were dismissed, but Nuon, a community activist who disputes Kinney’s account, said he was infuriated and humiliated. He filed a complaint, alleging the arrest was without probable cause, and a federal judge this month agreed, finding Kinney liable for false arrest.

City officials defend the officer’s actions, but civil libertarians say the case reflects evolving attitudes about the use of disorderly conduct charges to arrest someone who is behaving aggressively or insulting an officer but not breaking any laws.

Last week, the US Court of Appeals affirmed a lower court’s decision that a Kentucky man charged with disorderly conduct after he called an officer a “fat slob’’ had been arrested without probable cause.

In March 2009, a federal judge ruled against a Pittsburgh police officer who issued a citation against a man who gave him the middle finger.

In Cambridge, where police withstood withering criticism in July 2009 when a Harvard professor, Henry Louis Gates Jr., was arrested after he screamed at an officer from inside his home, officials have started looking more closely at individual disorderly conduct arrests to ensure officers are not overstepping their authority.

“The issue is where you draw the line between free speech and disorderly conduct,’’ said Jon Shane, a former Newark Police Department captain who teaches at the John Jay College of Criminal Justice in New York City. “That is a perpetual debate in law enforcement circles.’’

To justify a disorderly conduct arrest, an officer should show that the suspect prevented the officer from carrying out his or her duties, caused a crowd to form and possibly to riot, or had gotten too close to the officer, Shane said.

“It’s contextually based,’’ he said. “When John Q. Citizen is getting loud with you at a friend’s house and you say ‘I’m going to lock you up,’ you’re going nowhere with that. It’s a nowhere situation for the government and the police.’’

In the Lowell case, Nuon and Kinney agree they spoke several times to each other just before Nuon’s arrest at the Hale Street duplex, as Kinney took a report from a neighbor of Nuon’s friend.

What the officer and the community activist disagree on is each other’s behavior.

Nuon said Kinney was rude and aggressive from the moment he arrived, questioning him so loudly that he was practically yelling.

Kinney said that Nuon immediately was hostile, waving his arms angrily at the officer and telling him “nobody wants you here.’’

Kinney said he decided to arrest Nuon, who he said reeked of alcohol, because of his “irrational behavior.’’

“He was screaming and yelling at me over nothing,’’ the officer said in a deposition. “I was just looking at him, at first, thinking, I don’t know what this man’s problem is.’’

In an interview at his lawyer’s office, Nuon said he had two beers that night but was not drunk.

“I wouldn’t be rude to an officer who is responding to a crisis, a crime,’’ said Nuon, who sits on the state’s Sex Offenders Registry Board and was once liaison between the Middlesex district attorney’s office and the city’s Asian community.

When the officer asked for identification, Nuon said, he went inside his friend’s house to retrieve it.

The officer followed him inside, he said.

“I said, ‘You can’t come in without a warrant,’ ’’ Nuon said. Nuon said he then called 911 because he wanted to speak to Kinney’s supervisor.

Minutes later, he was in handcuffs.

US Magistrate Judge Leo T. Sorokin said in his summary judgment that he made his decision by looking at the incident from Kinney’s point of view. Even from that perspective, it was clear the officer arrested Nuon without probable cause, Sorokin said.

“Expressive conduct, even of a coarse and vulgar nature, cannot be punished as a disorderly offense,’’ he wrote in the 20-page decision.

Kinney could not be reached for comment. His lawyer, Stephen C. Pfaff, said that the officer stands by the arrest.

“A reasonable police officer standing in his shoes would in fact have done the same thing,’’ Pfaff said. Nuon “created a physically offensive condition, effectively, by not obeying his order to leave.’’

Sarah Wunsch, staff attorney with the American Civil Liberties Union of Massachusetts, said Sorokin’s decision is a reminder to police officers that even if they are dealing with an irate person, he or she is still protected by the Constitution.

“They don’t have an easy job,’’ Wunsch said of police. “They do have to put up with people who are yelling at them and disapproving of what they’re doing. But they’re supposed to be trained to deal with that. . . . They’re supposed to remain calm.’’

Nuon’s lawyer, Jeffrey Wiesner, said his client does not want money but would like to see Lowell police trained on assessing disorderly conduct. A jury trial to decide potential damages is scheduled for July.

Brian Leahey, a lawyer for the city, said officials are considering training options and an analysis of disorderly conduct arrests.

“Even though we don’t think [Kinney] did anything wrong, we’re still going to address the judge’s ruling,’’ he said. “Going forward, we’ll address the issue of what’s permissible and not permissible.’’

Nuon, a city zoning board member, said some officials and officers have responded coolly to him since he filed the complaint.

“I love the city, and I have a lot of good friends in the Lowell Police Department,’’ he said. “But I want them to know that if it can happen to me, it can happen to anyone in the Asian community. We don’t want to be mistreated.’’