Church is faulted on handling of pensions 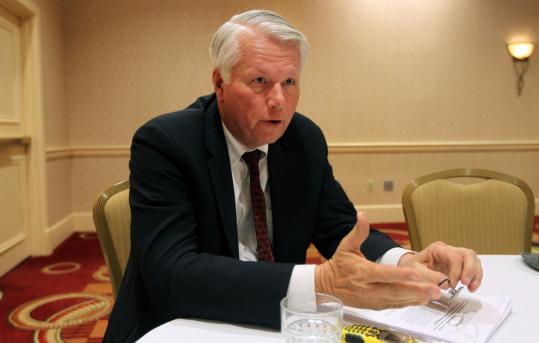 A onetime top official of the Catholic Archdiocese of Boston is blasting the church’s handling of pension payments for retired lay church workers, six years after the same official defended the archdiocese’s management of clergy pensions against criticism.

The unusual development comes shortly after an order of nuns, the Daughters of St. Paul, sued the archdiocese in an effort to extricate the retirement accounts of the nuns’ lay workers from archdiocesan control.

Former archdiocesan chancellor David W. Smith, saying he was acting “out of moral outrage,’’ disclosed yesterday that he has asked Attorney General Martha Coakley and Secretary of State William F. Galvin to appoint an independent trustee to oversee the funds in order to protect lay workers from being financially harmed by the archdiocese’s handling of the transition from a traditional pension plan to retirement accounts funded largely by employee contributions. Smith said he has also filed a letter expressing his concerns to the IRS.

“My concern is that there are 10,000 people out here who have worked their whole lives for the church for submarket wages, and those people are being put at risk,’’ he said.

Terrence C. Donilon, a spokesman for the archdiocese, reacted angrily to Smith’s criticisms.

“It’s outrageous — when David Smith was chancellor, we were running annual deficits, and we are now running a balanced budget,’’ Donilon said. “If he wants to get into a give and take about his performance as chancellor, which included serving as a trustee of the plan, I’m sure a lot of people would like to do that. But we have prepared a good plan to address the lay pension plan for the future.’’

Smith, who had worked for the archdiocese for 14 years, served as chancellor, overseeing the church’s finances, from 2001 to 2006. In 2005, some Catholics questioned the archdiocese’s handling of contributions to the clergy pension fund. Smith forcefully rebutted the charges, saying the money was handled appropriately. He was among the last members of Cardinal Bernard F. Law’s inner circle to be replaced by Cardinal Sean P. O’Malley.

Smith’s criticism of O’Malley’s stewardship of the pension funds reflects not only concerns of some church workers, but also long-simmering tensions over changes in change within the archdiocesan administration. The multiple pension funds in the archdiocese have been a particular source of controversy; the church has often said the condition of the funds is its biggest financial challenge, and critics of O’Malley’s management team have repeatedly questioned how well the funds are being run.

The church’s lay employee pension plan, which was more than fully funded in 2007, took a hit in the 2008 stock market crash and was only about 83 percent funded last year.

Employees vested in the plan had been promised a monthly payment when they retire. But the archdiocese, seeking to reduce its pension liability, is offering vested employees the opportunity to cash out of the plan early by taking a lump-sum payout, which would be discounted to reflect the plan’s underfunded status. Employees can also opt to accept an early monthly annuity or remain in the traditional pension plan.

Donilon said that the lump sum option is voluntary. To date, according to the archdiocese, 190 beneficiaries have elected to take the lump sum payment, 22 have chosen a monthly annuity, and 14 have declined an early offer. The first round of payments will be mailed in early May.

“The options were presented to people, and it’s been done with a good deal of thought and professional input and with the sole purpose of serving the beneficiaries to the best of our abilities,’’ Donilon said.

Smith, who met with reporters at a hotel in Newton yesterday to express his concerns, said the archdiocese is trying to get past and present employees “to choose to forfeit their pension benefits in exchange for a grossly inadequate one-time payout.’’

The archdiocese, he said, is trying to frighten employees into taking less money than they have earned by suggesting that the pension fund may run out of money before they retire.

He also said the archdiocese is overstating the value of the lump sum payments.

Smith also said that the archdiocese is taking advantage of the fact that church plans are not held to strict federal standards, which apply to most pension plans and which prohibit pension funds from asking employees to accept a reduced benefit.

Even if the church does not have a legal obligation to follow federal guidelines, he said, it has a moral responsibility to do so.

O’Malley should “simply stand up and publicly say on television that this is the full faith and credit of the diocese and every single person will get every dollar they’re due,’’ Smith said.

Before yesterday’s press conference, Smith met with a group of about 15 current and former employees of the archdiocese whom he provocatively dubbed “Boston Pension Abuse Victims.’’

“If you want to go back and think about abuse victims of the other type, look at this history of what happened to those people who were given a lump sum of money,’’ he said. “They go out and spend it for six months and come back broke.’’

Most of the employees declined to speak to the press. But one former administrator for the archdiocese who would give only her first name, Karen, said she had worked for the archdiocese for 22 years. Her lump sum payment would amount to about half of her former annual salary, but she is nervous about leaving it on the table.

“They’re making a threat that it may not be there,’’ she said.

In an interview yesterday, the current archdiocesan chancellor, James P. McDonough, said it is “the cardinal’s goal and the pension trustees’ goal to fully fund the pensions, but neither the cardinal nor the trustees can predict what will happen over the next 30 years.’’

Carol Gustavson, director of benefit trusts and plan administrator for the archdiocese, said the plan has been carefully reviewed by lawyers and actuaries to make sure it complies with the law.

Gustavson said archdiocesan officials had communicated repeatedly with Smith to try to assuage his concerns.