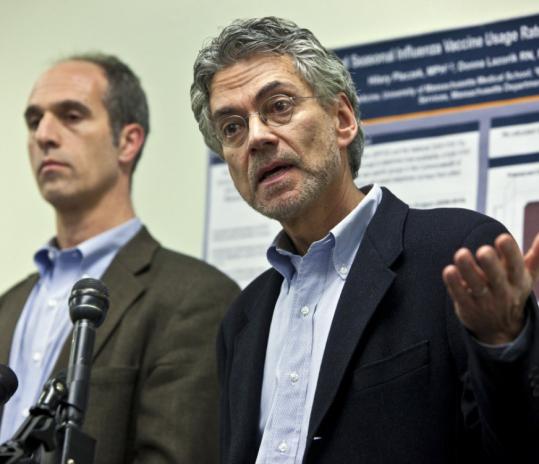 “I would advise the public to do nothing differently than they currently are doing,” said Public Health commissioner John Auerbach. With him, at far left, is Kenneth Kimmell, DEP commissioner. (Aram Boghosian for The Boston Globe)
By Katheleen Conti Globe Staff / March 28, 2011

Low levels of radioactive iodine linked to the nuclear disaster in Japan were detected in a sample of rainwater in Massachusetts, state health officials announced yesterday.

The concentration of radioiodine-131 found in the sample is very low and did not affect the health of the state’s drinking-water supplies, said John Auerbach, commissioner of the Department of Public Health.

The rain sample was taken during the past week in Boston as part of regular monitoring by the US Environmental Protection Agency. No detectable increases in radiation were discovered in the air that was tested in the same location where the rainwater was collected, Auerbach said at a press conference yesterday at the William A. Hinton State Laboratory Institute in Jamaica Plain.

“In Massachusetts, none of the cities and towns rely on rainwater as their primary source of water,’’ Auerbach said. “That’s why we’re so comfortable in saying that the drinking-water supplies throughout the state are pretty safe.’’

Officials would not specify which days the rain samples were taken or exactly where in the city they came from.

The concentration of radioiodine found in the rainwater sample was 79 pCi/L (picocuries per liter). Auerbach said that hypothetically, even if someone drank the rainwater directly, “it is still 25 times less risky than it would need to be in order to cause any kind of health concerns . . . . And that is even true for the population that would be the most vulnerable, such as pregnant women, breast-feeding women, and infants.’’

In “an abundance of caution,’’ state environmental officials collected samples from 12 other water-supply sources across the state yesterday, said Kenneth L. Kimmell, commissioner of the state Department of Environmental Protection. Results are expected over the next several days.

Radioiodine is a byproduct of nuclear energy production and has a half-life of eight days, Auerbach said. The half-life span means that only half of the level of radiation will be present in eight days, and so on until it dissipates.

“That means it should be undetectable in a matter of weeks, assuming that there is no new source of radiation exposure,’’ he said, adding that from the time the rainwater sample was collected, the levels of radiation being released have already “decreased significantly.’’

Similar levels of radioactivity in rainwater samples have been found in other states, including California, Washington, and Pennsylvania, Auerbach said. Other states have also reported small amounts of radioactive materials that may have originated from Japan’s Fukushima Daiichi nuclear complex, which was severely damaged after the 9.0-magnitude earthquake and subsequent tsunami that struck northern Japan on March 11. Radioactive material from the complex continues to leak into the atmosphere and the sea.

“Certainly if there is additional significant radiation release in Japan, that would have an impact on the larger environment,’’ Auerbach said. “That would be something that would be closely monitored by the US officials who are paying very close attention to that in Japan. So we will know that ahead of time if that occurs,’’ he added.

State health officials stressed that on a daily basis, Americans are exposed to radiation from sources like the sun, rocks, and bricks with doses that are 100,000 times higher than what has been detected in the US coming from Japan.

Auerbach said the Department of Public Health will continue to monitor precipitation and ambient air samples for the presence of radioactivity linked to activity in Japan, but stressed that there are no anticipated public health concerns here.

“I would advise the public to do nothing differently than they currently are doing,’’ he said.