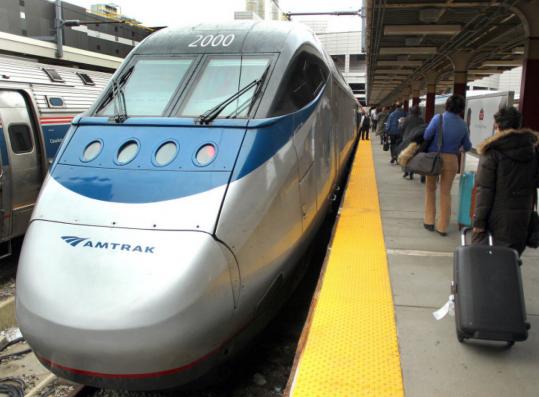 At South Station, passengers prepared to board an Acela train. The state got $32.5 million in funding to plan an expansion of the station that would add more train platforms. (John Tlumacki/ Globe Staff/ File)
By Eric Moskowitz Globe Staff / March 27, 2011

When the Obama administration awarded $10.4 billion for high-speed rail projects last year, Florida was a big winner, scooping up 20 times as much money as Massachusetts. But now that Florida’s new governor has rejected his state’s $2.4 billion for political reasons, Massachusetts officials are racing to make another pitch to Washington.

The competition is likely to be fierce. Officials and members of Congress from dozens of states began lobbying Transportation Secretary Ray LaHood almost as soon as Governor Rick Scott of Florida turned down his state’s funding in mid-February. Scott followed in the path of two other Tea Party movement-backed governors, in Wisconsin and Ohio, who had also rejected what they viewed as wasteful and ill-advised federal rail funds.

This month, LaHood announced a formal contest for the spurned money, with applications due April 4. The $2.4 billion can be used not only for true high-speed rail, but also for projects improving existing links or building new conventional connections between cities at least 100 miles apart.

“That’s what we’re fighting to get, and the tea leaves are reading well for us,’’ said Representative Michael E. Capuano, a Somerville Democrat. “But they don’t matter until they have a check attached to it.’’

The Merrimack River Bridge is considerably less glamorous than the proposed 170-mile-per-hour link between Tampa and Orlando that Scott rejected, but it is one of many investments needed in the Northeast to improve city-to-city rail connections.

“It’s going to be a very competitive grant,’’ said Richard A. Davey, general manager of the MBTA and the statewide rail and transit administrator. “But we’re hopeful that we’ll put in an aggressive application that demonstrates that this project can assist in improving the running times of a very popular intercity route.’’

The Obama administration wants to make high-speed, intercity rail its signature transportation initiative, and the president sees construction of a robust national rail network — a 21st-century answer to the Interstate Highway System — as a way to alleviate highway and airport traffic, create jobs, and benefit the environment.

But the idea and the funding for it, like so much in Washington, have been ensnared in partisan politics. The $787 billion stimulus package enacted in 2009 included $8 billion for high-speed rail, and the president persuaded Congress to include almost $2.5 billion more in the 2010 annual budget — what Vice President Joe Biden called a “down payment’’ on the eventual network the administration envisions.

When the money was offered, leaders from nearly three dozen states filed applications seeking more than six times the amount available. But the funding also became a target for criticism from conservative and Tea Party camps, attacked during the midterm elections as naive and wasteful spending that would be better off saved, returned to taxpayers, or redirected to roads.

Although rail is most popular in the densely populated Northeast, much of the federal money was directed at giving rail more of a foothold in other regions; electoral battleground states received a disproportionate share.

The Florida project had special appeal to the White House because it was the most ready for construction of any true high-speed rail proposal, and it was relatively small in scale — an 85-mile route that could be completed by 2015, making it a potential demonstration project for promoting high-speed rail to the rest of the nation.

From the first $8 billion, Florida grabbed $1.25 billion. New England got less than $200 million, with $35 million to Maine to extend the Downeaster from Portland to Brunswick, and $160 million for a Connecticut-Massachusetts-Vermont project to improve the Vermonter line along the corridor. (That included $70 million for Massachusetts to make its portion faster and more direct, rerouting it through Greenfield and Northampton.)

In the same round, Massachusetts was rejected in its application for nearly $2 billion for South Coast Rail, to restore Boston service to Fall River and New Bedford, a commuter rail application that Massachusetts officials concede was a stretch to qualify for intercity money.

In the second round, Florida got another $800 million, while Massachusetts got $32.5 million to plan the expansion of South Station from 13 platform tracks to 20 or more, which would benefit both commuter and long-distance rail by relieving delays caused by a shortage of berths at the Boston hub.

That was in October, and the election that followed a few days later elevated several candidates who had attacked rail projects as boondoggles. Governors-elect in Ohio and Wisconsin quickly rejected a combined $1.2 billion, and LaHood swiftly redirected the money to past applicants, including $2.8 million more to Massachusetts to fully cover its Vermonter application. Meanwhile, Florida got another $342 million — a bid to keep its new governor, Scott, from walking away from the high-speed line backed by predecessor Charlie Crist.

That put the federal share at $2.4 billion for the nearly $2.7 billion Florida project, and private companies were lining up to cover the rest. But Scott thought his state would be stuck paying for construction overruns and subsidizing the annual operation, and he questioned who would ride a train between two cities where cars are needed to get around. After lawmakers who supported the project failed to stop Scott in court, LaHood said he would not force Florida to take the money.

“States across the country have been banging down our door for the opportunity to receive additional high-speed rail dollars,’’ he said in a statement, announcing a formal application process for redistributing Florida’s money.

Local rail proponents said the opposition elsewhere is unfortunate, even as it presents opportunities for New England. But Richard Arena, president of the Boston-based Association for Public Transportation, criticized Massachusetts for not being more ambitious in advancing true high-speed rail and for not having applications ready the moment LaHood opened the door.

“The people who are going to get the money are the ones who are in the best shape to pull it off,’’ Arena said.

Massachusetts officials scrambled for two weeks to pick one project most likely to succeed, rather than submitting competing projects, given the time and labor needed to compile each application. Those can run hundreds of pages, including charts, maps, drawings, and other supporting material, said Jeffrey B. Mullan, the state’s secretary of transportation. Mullan also met in person and by phone with other New England and Northeast Corridor leaders to discuss coordinated efforts.

The Northeast Corridor is the only one in the country where some trains already travel above conventional speeds. The Acela trains that run between Boston and Washington are capable of reaching 150 miles per hour, but they average only about half that because of infrastructure conditions, train traffic, and other constraints.

“Things that are good for the Northeast Corridor are good for Massachusetts,’’ Mullan said, referring to the Boston-New York-Philadelphia-Washington line as “one of the world’s great rail corridors.’’

After the money Florida spurned gets disbursed, the next round of funding is an open question. The administration recently announced it wants to spend $53 billion more over the next six years, but Congress is wrestling over even the next $1 billion. Capuano said he considers the opposition shortsighted.

“If they denied the money for the Interstate Highway System when Eisenhower was president,’’ he said, “what kind of country would we have?’’