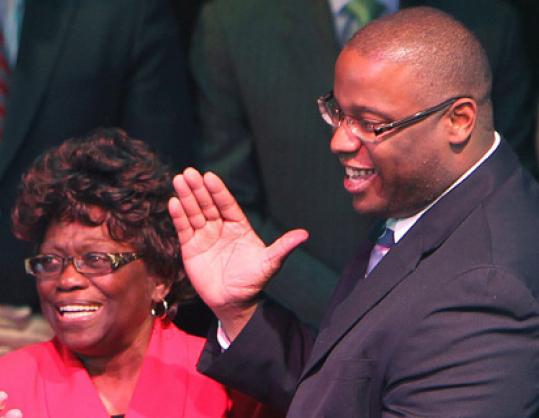 Tito H. Jackson was sworn in as a city councilor yesterday before a raucous crowd of several hundred supporters in an event that was part campaign rally and part community celebration — with a dose of official business thrown in.

The festive occasion reflected the optimism and enthusiasm residents of District 7 see in the new councilor and also relief at closing a tumultuous chapter on former City Councilor Chuck Turner, who entered a federal prison on Friday following his bribery conviction.

The event, at Hibernian Hall in Roxbury, was packed to overflowing with supporters from the district, from across the city, and beyond. People munched fried chicken and corn bread, cheered singers, and applauded dancers. But most of all, they cheered the 35-year-old lifelong resident of Grove Hall, who was sworn in before the full City Council and took his seat to cheers of “Tito! Tito!’’

“Whatever he can do for you, he will,’’ said Bodden of Dorchester, who has known Jackson since high school, where they served together on an NAACP youth chapter. “When you are at your lowest, he is there for you with that big smile.’’

In his speech, Jackson promised to push hard for jobs, the revitalization of Dudley Square, top-flight schools, and safe streets. He has touted his experience working in the state’s economic development office as evidence that he can boost job growth and economic investment. In a touching moment, while thanking supporters and family, he talked about his deceased father, Herb Jackson, a longtime community activist, saying, “Dad, I hope you’re proud of me.’’

His mother, Rosa, was in the crowd. He thanked her for adopting him when he was two months old and for keeping the family together and safe in hard times. “Mom, I would not be . . . the man I am without you,’’ he said.

The swearing-in, done on the Jackson family Bible, sparked laughter when the new councilor stumbled over some of the phrases he was supposed to repeat, as read by Mayor Thomas M. Menino.

Supporters cheered him on. “He is the future,’’ said Sadie Burton-Goss of Mattapan, who predicted Jackson had a tremendous political career ahead of him. “We’re very excited there are young people who are smart and forward-looking and want to make sure this a great city to live in.’’

Turner, who held the district seat for more than a decade, was videotaped by the FBI taking $1,000 from a businessman. Turner testified that he accepted something, but could not remember what it was. His name was not mentioned yesterday by any of the speakers. The district is made up of Roxbury and parts of the Fenway, South End, and Dorchester.