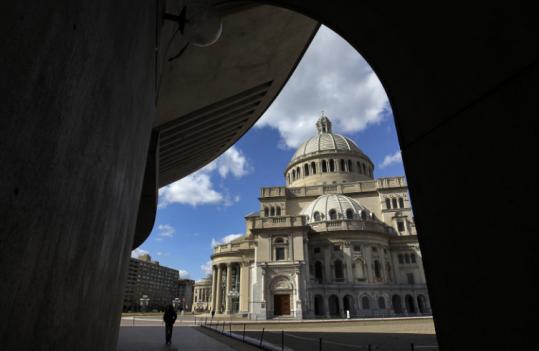 The city of Boston has designated the Christian Science Center plaza a historic landmark, giving it special protections from future development, including changes to its most famous feature — a 686-foot-long reflecting pool.

The city said that it has established guidelines for redevelopment and that Christian Science Church leaders would need input and approval from Boston’s Landmarks Commission before changes to certain features at the plaza could be made.

“This designation gives guidelines on what can be changed or what should be taken into consideration,’’ said Susan Pranger, the chairwoman of the commission. “If the owners want to make changes to the exterior, they can submit an application to the Landmarks Commission.’’

Church leaders will need the commission’s approval on any reconfigurations to the complex’s landscaping, pavement, masonry, doors and windows, or any new additions. The designation does not apply to the use and interior of any of the church buildings.

The plaza sits in a section of the city where the South End, Back Bay, and the Fenway converge, drawing scores of visitors each day to walk its grounds and pause for contemplation at its massive pool.

In addition to the First Church of Christ, Scientist, the plaza also includes the church’s headquarters and the Christian Science Publishing Society. The Mother Church, built in 1894, also includes an expanded church extension.

In 2006, the church announced its intention to revitalize the plaza and streamline its operations by leasing and selling buildings amid difficult economic times.

Two years later the church leadership began moving employees into the publishing house, the largest building on its site, which also includes the Mary Baker Eddy Library. The move freed up other buildings, including a 28-story tower, which the church plans to lease.

Last year, the Globe reported that church leaders outlined their vision to construct three buildings on the property to either sell or lease and then use the money to finance the estimated $40 million redesign of the plaza and pool, which would be smaller, shallower, and outfitted with a crosswalk. Those plans will now have to gain the approval of the Landmarks Commission.

Church leaders said the church’s world headquarters will remain at the plaza and that they are seeking to improve the plaza for the community and explore options for underutilized real estate.

Nancy Sterling, a spokeswoman for the church, stressed that the leaders want to put more effort into their religious mission and less into the real estate. She also said that the church does not intend to make any significant changes to its famous pool.

“We are reducing it by a few feet,’’ she said, “and we are building a crossing path over it so that people will not have to go all the way around.’’

The plaza and pool were designed by architects including I.M. Pei & Partners and Araldo Cossutta, and built in 1972.

In an interview with the Globe last May, Cossutta, the lead architect, said he supports the walkway but opposes making the pool shallower. “That is a ridiculous idea,’’ he said. “It becomes a mud pool, not a water pool.’’

The church’s redevelopment plan initially drew criticism from those concerned about alterations to what some view as one of Boston’s most treasured open spaces, and it led a group of residents and architects to submit a petition to the Landmarks Commission seeking the historic designation.

George Thrush, who directs Northeastern University’s School of Architecture, said he is pleased the city has given the plaza’s redevelopment another level of protection. “I think it’s fine,’’ said Thrush, who also chaired a city-appointed Citizen Advisory Committee looking into the matter.

“I’ve been assured [by the city] that this is not a black and white issue. They are much about providing detailed rules about how to modify a historic building as much as they are about keeping it the way it is.’’

The Landmark Commission approved the request in January, the mayor signed off later that month, and the Boston City Council gave its consent earlier this month.