Lincoln shrinks, and wonders why 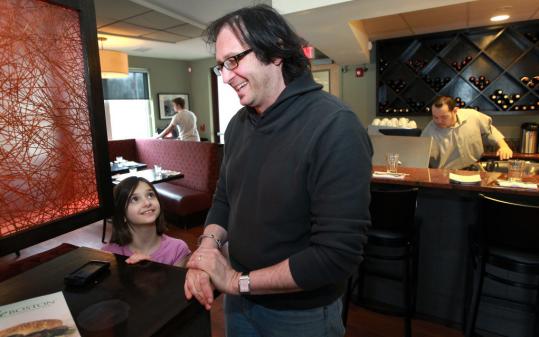 LINCOLN — The news this week came as a shock to this proud, affluent town: Federal census figures show that Lincoln has lost a whopping 20 percent of its residents in the past decade, more than any other municipality in the state.

Town administrator Tim Higgins speculated that the drop had something to do with a dwindling population at Hanscom Air Force Base. Higgins prepared to appeal to the state to consider that before cutting any of Lincoln’s $1.5 million in Massachusetts aid based on what he called skewed figures.

But other factors are also at play that explain why Lincoln’s population shrank from 8,056 to 6,362.

In this quaint suburb west of Boston, with its historic houses and spacious lots, real estate turnover has been sluggish. Retired residents are holding onto their homes, perhaps waiting for a more favorable real estate market, and young fam ilies are finding few or only premium-priced properties to pick from.

“We loved Lincoln, but we couldn’t find anything affordable here,’’ said Christian Touche, 44, a father of two who opened the AKA Bistro last year, adding that his restaurant is the first in the town’s history granted a liquor license. He recently bought a house in Sudbury.

A Globe review of data backs up the town administrator’s hunch that Hanscom is the single biggest reason for Lincoln’s profound drop in population.

Hanscom spokesman Kevin Gilmartin said the number of military personnel assigned there dropped from 1,800 to 1,200 in the past decade. Also, the base’s housing stock has gone through tremendous upheaval, which has reduced the availability of rental units and may have pushed some military personnel to choose to live off-base.

A private contractor took over the operation of the housing units in 2004 and launched a massive renovation that included demolitions. The net result is that the housing stock went from 850 to 621 units in the past decade, Gilmartin said. Among the current units, some 60 or so are empty.

Another figure also shows a drop in young families living at Hanscom: Enrollment at the Lincoln public school dedicated to children at Hanscom in kindergarten through eighth grade fell from 604 to 385 in the past decade, according to School Department figures.

Even considering all these changes at the base, Gilmartin believes they explain, at most, half of the population decline in Lincoln, where the median family income is $132,000.

Other demographic and economic factors seem to be involved, especially considering that most of Lincoln’s neighboring communities experienced slight increases in population from 2000-2010: Bedford went up in the same period by about 6 percent, Sudbury by 5 percent, Concord by 4 percent, and Lexington by about 3 percent.

Jeff Morgenstern, who runs the Lincoln office of Coldwell Banker, said he does not have a single explanation for the town’s drop in population, though single-family house sales have declined: In 2000, 71 were sold in the town, and last year there were 41 sales.

“I don’t think there’s a lot of young families moving into town,’’ he said.

School data supports that. School Superintendent Michael Brandmeyer said that the other public schools that educate Lincoln children typically enroll from 600 to 650 students and that total enrollment this year is on the low side, at 615. He said the town goes through 20-year cycles of population growth and decline, based largely on the turnover of empty-nester houses to young families.

Tom Kennedy, 62, a communications consultant who has lived in Lincoln for 33 years, said he predicts that a major upturn in the economy will prompt more elderly residents to put their homes on the market.

“If the economy is better, you’ll see more young families moving in,’’ he said after stopping off at the Post Office this week.

Meanwhile, town officials say Lincoln is adjusting to the changing needs of its graying population, including construction of hundreds of new apartments for seniors. Two major complexes in town added some 230 units designed for residents over 55 years old.

The officials soon hope to gain a better understanding of why Lincoln’s federal census figures evolved as they did. Their own official town census last year put Lincoln’s population at 5,900, a number they say has changed little since 2000.

“It’s not a time to panic, but we need to do our due diligence and make sure that the state is aware of the complexities of the situation,’’ Higgins said. 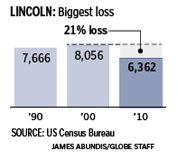 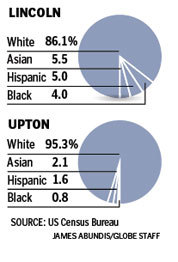