Heads to prison after e-mail flurry 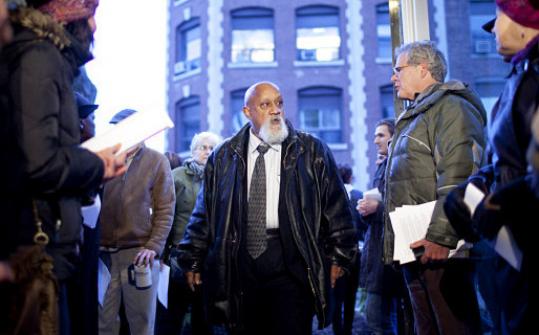 Chuck Turner sent a trove of e-mails in the 36 days he served on the Boston City Council after his felony conviction: He groomed his successor, Tito Jackson; sparred with critics; and fanned resentment against councilors who voted to expel him.

He also reveled in constant affirmation from his followers, and he refused an offer to lobby prosecutors for leniency, saying that would amount to “collaborating with the enemy.’’

“From a consciousness-raising standpoint, the best thing would be for them to put me in jail,’’ Turner explained in an e-mail to his staff Nov. 8.

That day has come for the 70-year-old, who is required to report to the Bureau of Prisons today and begin serving a three-year term at a Hazelton federal penitentiary in Morgantown, W.Va.

Last fall, Turner spent his waning days in elected office furiously typing and receiving the e-mails, almost 2,200 of which were obtained by the Globe under the state’s open record law.

The correspondence shows a man drained from his criminal trial but energized by the battle to keep his council seat and stay out of prison.

Turner dashed off kind words to critics thanking them for their screeds, lost his temper with a city employee, and handled mundane requests from constituents who wanted help with a street sign or a parking ticket. He wrote fiery essays, organized rallies, and orchestrated a massive letter writing campaign by his supporters.

But all the while he remained resigned to his fate.

He drafted written plans for his departure long before being kicked out of office, composing lengthy documents about issues and assignments for his staff, who remained working at City Hall after he left. Turner often wrote that he expected to go to prison, asking in a note on Nov. 10 for a copy of a book because, “It looks like I am going to have some more reading time soon.’’

The councilor maintained his innocence in the e-mails, which date from his conviction Oct. 29 to his departure from City Hall Dec. 3. Yet, he was also acutely aware that the City of Boston e-mail address left a paper trail and frequently sent documents to a private e-mail account.

“I can meet with you. Probably for no more than 20 to 30 minutes if that long,’’ Turner wrote on Nov. 15 to Rose Arruda, who works for Governor Deval Patrick as an event coordinator. “While I don’t want to say why on the computer, it is not about your support or the governor’s support in my situation.’’

The pair met for lunch at the Purple Shamrock, across from City Hall. Reached yesterday in the governor’s office, Arruda said she and Turner had been close for a decade.

“He just felt the need to connect with different friends who had supported him,’’ Arruda said. “There was so much bad press. He felt that a lot of people he cared about were misunderstanding him. It was a conversation like that.’’

Turner declined to comment on any of the e-mails yesterday when reached by phone. He spoke last night at a forum at Northeastern University about “framing the innocent’’ and prosecutorial misconduct.

Turner fixated on those same topics in his e-mails in which he often blamed his conviction on former US attorney general John Ashcroft and President Bush.

However, there were few mentions in the documents of Ronald Wilburn, the businessman paid by the FBI to secretly video a handshake when he slipped Turner $1,000 in cash for help obtaining a liquor license.

When he testified at trial, Turner acknowledged that he accepted something from Wilburn, but he told the jury he could not remember what it was. One of his supporters wrote to him to lament the fact that Turner never explained what happened that day.

“You attack the press, you declare your innocence, but you don’t tell your story,’’ read an Oct. 31 e-mail from a man who identified himself as Jon Phoenix. “And without that now, especially after a conviction like this, you’ll be lost. Again, court of public opinion matters.

Other e-mail exchanges were far less serious. On Turner’s last day in office, Steven P. Ryan wrote the councilor in 24-point font, “Go away,’’ adding extra O’s and Y’s to the words.

Turner responded in the same 24-point font: “No!! your friend chuck,’’ adding extra O’s to the first word.

On Nov. 3, Turner sent a lengthy document to Jackson briefing him on an array of issues and projects his district, which includes Roxbury and parts of the Fenway, South End, and Dorchester.

Jackson said yesterday via e-mail that he, “welcomed his input, particularly on the important economic development projects.’’

The e-mails show that after his conviction Turner raised more than $11,000 from supporters to pay bills in his district office.

After the City Council threw him out, Turner’s followers took especially sharp aim in the e-mails at Felix G. Arroyo, who worked for Turner before being elected and had stifled tears when he voted to expel his former boss.

“Can you imagine how I feel,’’ Turner wrote to an Arroyo critic, “seeing Felix say that I mentored him and then throwing me under the bus.’’