At Westford conference, a fellowship of Tolkien fans 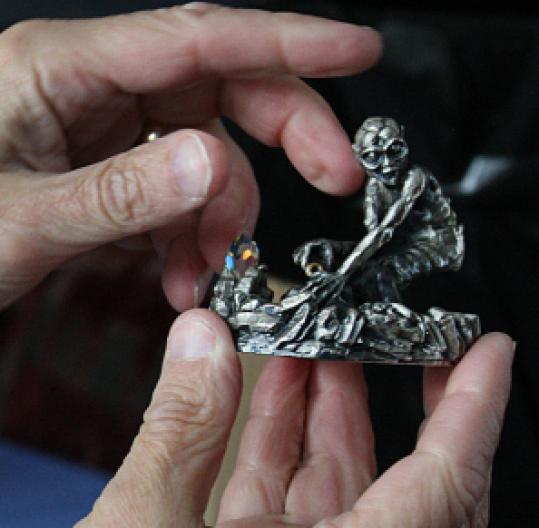 Joy Fields, eager to meet the J.R.R. Tolkien fans with whom she has role-played on the Internet, is flying in from California. Edmund Meskys, with a suitcase stuffed with old fanzines to sell, will make the drive from Moultonborough, N.H. Jan Finder, who likes to go by Pippen, his “Lord of the Rings’’ alias, is heading to town from Albany, N.Y.

They will gather tomorrow and Saturday with other Tolkien enthusiasts at the Regency Inn and Conference Center in Westford for what is being billed as the “3rd Conference on Middle-earth.’’ (Middle-earth is the fictitious setting of Tolkien’s work.) With panel discussions, a party, and Tolkien-themed wares for sale, the gathering will be the ultimate Frodo-fest.

“What I’m looking forward to is having a weekend to treat talking about Tolkien as a serious topic as opposed to the cultural perception that we’re all nerds and geeks who live in our parents’ basements,’’ said Emily Moniz, 29, a doctoral student at The Catholic University of America in Washington, D.C.. She will present her paper, “Gondor Needs No King: Images of Kingship in the Ramayana and J.R.R. Tolkien’s ‘The Lord of the Rings.’ ’’

For Tolkien enthusiasts, it has been a long wait between conferences.

Finder was a graduate student at the University of Illinois when he organized the first Middle-earth conference in 1969. Two years later he held the second at Cleveland State University, where he was working as an assistant dean. Then the conference died out.

Now, in the aftermath of the huge success of the “Rings’’ films and with “The Hobbit’’ now in production, interest in Tolkien is higher than ever before. After a four-decade drought, Finder has brought back the conference.

“I just finally said, ‘I want to do it, and I don’t give a damn if I lose money — I’ll pay for it,’ ’’ said Finder, 72. “This is something I’ve wanted to do for 40 years.’’ He chose the Westford hotel for a simple reason: It’s close to Boston but less expensive than other venues.

Still, there were some chuckles in Westford when word of the conference spread.

“It’s really strange,’’ said Jo Cobleigh, an office manager for the town’s police department. “I’m picturing all these people in costume wandering around the Regency.’’

Science fiction and fantasy conventions dot the landscape, from Dragon*Con in Atlanta and Comic-Con International in San Diego to Arisia in Boston. The Middle-earth gathering won’t be nearly as large.

But attendees said they were looking forward to a conference that they can easily navigate. Eric Van, a Watertown statistician and Tolkien lover, said he is anticipating a chance for fans to talk with one another and listen to presentations without having to jostle for elbow room.

“It looks like it’ll be a small, intense gathering,’’ said Van, who will speak on a panel titled “Two Films to Do ‘The Hobbit’ Is One Too Many!’’ “I’m looking forward to this one because it’s going to be one group of people in one room doing one thing.’’

With just four novels — “The Hobbit’’ and the three volumes of “The Lord of the Rings’’ — the English John Ronald Reuel Tolkien, who died in 1973, was one of the most influential writers in history. The “Rings’’ trilogy has sold more than 150 million copies.

Peter Jackson’s three “Lord of the Rings’’ films grossed $2.9 billion and won 17 Oscars, and in the process made Tolkien relevant to a new generation. In 2010, Forbes ranked Tolkien the third top-earning dead celebrity, just behind Michael Jackson and Elvis Presley.

Finder became a Tolkien devotee in 1964, when he found himself so mesmerized with the “Rings’’ trilogy that he spent three straight days curled up at his parents’ house blowing through it.

Now retired, Finder has been struggling with prostate cancer and spent time last week in the hospital. But he said he is eager to come to Westford. Even after all these years, Finder re-reads Tolkien’s work and finds himself particularly drawn to Middle-earth.

“I don’t know if I’d want to live there, but there’s a certain allure to the very earthiness. The pacing is slow, and this is something that a lot of people strive for and look for in their life,’’ he said. “This is why that high-priced lawyer disappears into Vermont and starts a dairy farm.’’

One of the papers that will be presented this weekend lays out John Bentley’s plan to replicate Middle-earth in the Sierra Norte region of Spain. In a phone interview from his home, Bentley described an unspoiled region near Madrid where Tolkien lovers will be able to stay in a hobbit hole and enjoy many of the interests of hobbits, including beekeeping, agriculture, and country crafts. He stopped short of calling it a theme park.

“We don’t want any razzmatazz hotels like Disneyland,’’ said Bentley, a retired British engineer who will not be attending the Westford conference. “We want this to be the Tolkien center in the northern hemisphere. There are [millions of] Tolkien fans in the world. So I reckon. This will be a real Middle-earth for them.’’

Other presentations will focus on Christian elements in the author’s work and a slide show tour of New Zealand, where Jackson filmed much of “Rings’’ and has just begun work on “The Hobbit.’’

There will also be some partying in Westford. Tomorrow night, participants will take part in the “Downfall of Sauron Party,’’ a soirée complete with seed cakes, one of Bilbo’s favorites.

Merchants at the conference will include author Resa Nelson and Methuen’s Ed Trachtenberg, who runs a store called The Dragon’s Lair, which sells stone dragons, pewter unicorns, and other fantasy-themed items. Attendees can also sift through Middle-earthy clothing, which includes long, flowing elf gowns.

Meskys, a 75-year-old retired teacher, will haul a suitcase and box of old Tolkien-themed magazines to the convention. He has been storing them in his garage but thinks it is time to let them go. Money is not his motivation. He plans to sell them for between 25 cents and $2 an issue.

“I’m getting old,’’ Meskys said. “I don’t have the energy I used to have. I just want to pass on the material.’’