Kraft’s interests include business, charities, and, of course, football 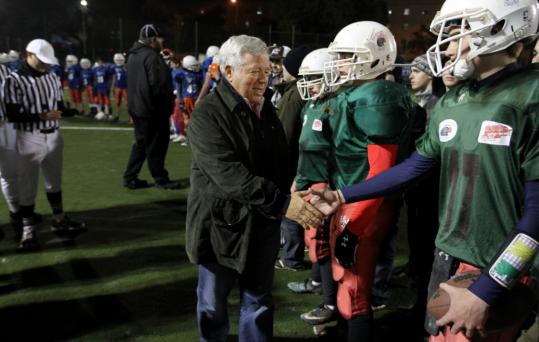 JERUSALEM — The two teams barked pregame chants in Hebrew. The referee, an Orthodox Jew with side curls, a black cap, and a zebra-striped shirt, placed the football by the 40-yard line.

Near a logo at midfield, pelted by a whipping rain, Robert K. Kraft had just finished addressing the few dozen huddled fans in a mix of Hebrew and English. The only common word: football.

Thousands of miles from Foxborough, the Kraft Family Stadium in Jerusalem is the latest attempt by the New England Patriots owner to meld his two passions: American football and Israel.

Familiar to New Englanders as the billionaire in the blue blazer, ensconced in the owner’s box at Gillette Stadium, Kraft has another, more personal, domain here in Israel, far from the American media glare. In five decades, he has built businesses, charities, and an attachment to the Jewish state that is intimate, if less well known.

“Jerusalem goes back thousands of years,’’ Kraft said in Tel Aviv this month. “The spirituality it gives off is something that’s very special. So I guess, yes, it is personal.’’

He honeymooned here with his wife, Myra, 47 years ago, looking out from his hotel room on the Old City when it was controlled by Jordan. Since that formative visit, the Krafts continued to make frequent trips to Israel and soon began investing in the country.

In the late 1980s, they began building what he called “the largest, most modern packaging’’ facility in the Middle East. In 1993, Kraft booked singer Elton John for a rare Tel Aviv pop concert, imploring him to perform despite disagreements over security that initially caused the star to leave the country.

And for about a decade, the Patriots owner has been trying to persuade a Jewish country in love with soccer and basketball to play a game involving something called a pigskin.

It was Kraft, 69, who helped persuade Governor Deval Patrick, a Democrat, to go to Israel earlier this month. Almost 20 years ago, he was also instrumental in bringing William F. Weld, a Republican governor, here.

While his Israeli profile does not rival his status in New England, Kraft moves freely in Israel’s elite circles. During this month’s visit, he was acknowledged on the floor of the Knesset by Deputy Foreign Minister Danny Ayalon as “my very good friend Robert ‘Bobby’ Kraft.’’

And in a minor slight to the governor, The Jerusalem Post referred to the Massachusetts group as the “Kraft delegation,’’ in an article on its sports pages. Throughout the trip, a film crew, working on a feature for American network television, followed him around at every turn, as did Patriots publicist Stacey James.

This trip came at a complex time for Kraft’s primary business. While he was away, negotiations between the NFL and its players collapsed. NFL owners began a lockout, and players went to court, threatening the coming season for America’s most popular spectator sport.

Still, Kraft was by the governor’s side at every key meeting, bantering with Israeli officials. While there, he solidified an already close relationship with Patrick, who worked to help Kraft in 2009 by pushing, unsuccessfully, to use $9 million in stimulus money to build a footbridge near Gillette Stadium.

Kraft and his wife, who has spearheaded the family’s charitable efforts in Israel, have longtime business ties and friendships with Israel’s small group of political players. That has given them an exceptional “sort of fluency’’ with the region’s political dynamics, the governor said.

“Their relationships here go so deep,’’ Patrick said of the couple.

Kraft is listed by Forbes as one of the 1,000 richest people in the world, so it is of little surprise that he owns businesses in more than 80 countries, by his count.

The Israeli ventures, like the others, have paid off. Kraft said he sold his packaging company in Caesarea 18 months ago for what he called “a very handsome return,’’ though he declined to disclose a figure.

He continues to ship 50,000 to 100,000 tons of paper to the country every year, part of an export business based in New England. He has also invested in Israeli retail companies, a bread company, and a life sciences company.

As he cataloged his investments recently, Kraft also spoke of a grander vision for the country’s economic independence, rooted in a capitalist belief that financial prosperity will promote peace and stability for Israel and its neighbors. He said he employed Palestinians from the Gaza Strip and the West Bank at his companies until security checkpoints imposed after the second intifadah made it impossible.

“We need to create jobs in the West Bank and Gaza and Israel and Jordan and Syria and Lebanon,’’ he said. “I’m rooting for a lasting peace in that area of the world. . . . I hope American entrepreneurs and Mideast entrepreneurs can work to help do that.’’

His other passion, the football league, was started by New York-born Israeli Steve Leibowitz as a flag league in 1989. It got a big boost when the Krafts spent $250,000 to refurbish an old stadium in Jerusalem in 1999.

After the grass field turned into a sand lot, the Krafts spent another $500,000 on artificial turf. The stadium was rededicated in 2005.

The adult tackle league, now in its fourth season, is the only Israeli sports league that has three Palestinian players, according to Leibowitz. To attend practices and games, they must commute past security checkpoints in the territories, he said.

At the game earlier this month, one of a number of American spectators in the crowd was amused by the notion that Israel is starved for American football.

“It’s just one more thing Americans can’t live without,’’ said Rebecca Zibman, a Newton native living in Israel. “They tried a baseball league, and it didn’t work out.’’ Besides, she added with a shrug, “it’s cheaper than a Patriots game.’’

Kraft has not just brought American football to Israel; he has also imported some of its biggest stars, in an effort to expose Americans to a country they might not otherwise visit.

Patriots quarterback Tom Brady came in 2006. Tight end Ben Watson and defensive end Richard Seymour visited in 2008, and were so moved they were baptized with their wives in the Jordan River. NBC sportscaster Al Michaels, a close Kraft friend, joined the Patriots owner here on his most recent trip.

Kraft brought the Vince Lombardi Trophy here in 2005, the first time it left the continent. He carried the giant trophy around the country, undergoing a comical security check when he took it to the office of Prime Minister Ariel Sharon.

“No one knew what a Super Bowl trophy was, and they were looking for where something could be hidden,’’ Kraft recalled.

His guests learned about his family’s philanthropic work in the country, including a Boston-based project run by Combined Jewish Philanthropies to help Ethiopian Jewish immigrants mesh into Israeli society.

Kraft said he wants visitors to feel the spirituality, to see people of Muslim, Christian, and Jewish faiths “within touching distance’’ in a place they all see as holy.

Michaels, the NBC sportscaster, was impressed that the people of different faiths were about to get even closer, in a tackle football game between the Big Blue Jerusalem Lions and the Dancing Camel Tel Aviv Pioneers.

“You’ve got Jews and Palestinians on a football field,’’ said Michaels. “What could be better than this?’’