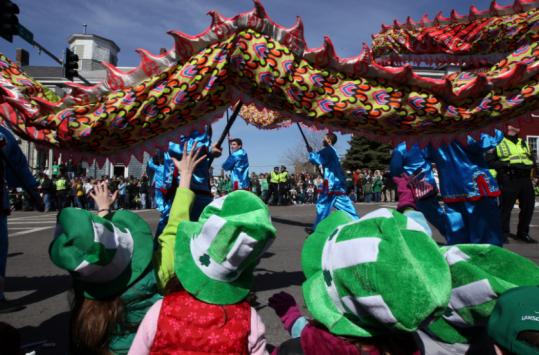 Under a brilliant, blue sky in South Boston yesterday, there were two Saint Patrick’s Day parades — the traditional one and, more than a mile behind it, an alternative one billed as the Peace Parade.

The first had all the usual trappings of the cultural celebration and street party that dates back more than a century and draws crowds lining the streets six people deep.

After that parade ended, the crowd mostly dispersed, unaware or uninterested in what followed. Forty-five minutes later, the police let the second one begin: the court-ordered procession of antiwar demonstrators and gay rights groups. They numbered a few hundred and marched before scattered onlookers, but proceeded without incident — after nearly two decades of controversy over who could march in Southie on the Sunday closest to Saint Patrick’s Day.

“It’s about equality,’’ said Ian Struthers, 24, a board member for the gay rights group Join the Impact Massachusetts, who carried a sign bearing a rainbow-colored shamrock. “We should be able to go to the same places and participate in the same community events as anyone else.’’

It seemed an eternity removed from 1992 and 1993, when crowds responded to the gay rights groups who attempted to march by hurling rocks, epithets, and spittle. In comparison, among the few thousand who remained to watch it, many cheered, flashed peace signs, or pumped their fists in solidarity.

The occasional hostile remark was aimed at the antiwar contingent. More than seven years after same-sex marriage was legalized in Massachusetts, the sight of gay pride signs in Southie scarcely turned heads.

“I’ll tell you right now, I would like to see peace in the world,’’ she said.

Still, officials seemed hesitant to take chances. By court order, the second set of marchers had to stay at least a mile behind the first.

But police seemed to wait even longer to give the green light to the second parade, not sending them off along the 3-mile, hairpin route from Broadway Station to Andrew Square until about 3:20 p.m.

By then, much of the usual crowd, annually estimated at 500,000 or more, had set off for bars, house parties, or home.

Police issued 380 civil citations for drinking in public and made 11 arrests for crimes such as assault and battery or disorderly conduct, typical Saint Patrick’s Day offenses that appeared unrelated to the social and political issues that have swirled about the parade for years.

Boston Police Commissioner Edward F. Davis said in the early afternoon that he had several hundred officers in place but was not expecting anything unusual.

“We want to make sure it’s a safe family event,’’ he said, standing before a blinking message board that said: “Drinking in public will get you/Fined $200 or arrested remember/The Parade is a family fun day.’’

The first parade began at 1 p.m., with coordinators in green windbreakers waving on entrants who poured onto West Broadway.

He paced back and forth in the intersection, waving on a host of conventional entries — pipe and drum bands, Revolutionary War reenactors, gladhanding politicians — and some unusual ones.

“OK, let’s send out the Star Wars guys! You guys ready?’’ he said at one point, as nearly 70 Jedi and Empire representatives from the 501st Legion, a Star Wars costume brigade, marched in place near a group of Aleppo Shriners idling in tiny cars.

Nearly every entry was adorned with shamrocks and other symbols of Ireland and Saint Patrick, but there was an eclectic mix, the philanthropic, the patriotic, and the purely promotional, not to mention the literary and the lowbrow — one promoted a student essay contest about Irish culture; another, from the radio station WAAF, featured green necklaces hurled from the open door of a portable toilet.

The Allied War Veterans Council has won multiple suits protecting its right to include or exclude whomever it wants. After a local judge ordered the inclusion of an Irish-American gay rights group two decades ago, the council appealed all the way to the US Supreme Court, which found unanimously in its favor that the parade was a protected form of free speech.

That ruling was tested in 2003, in the final days before the Iraq war, when a group known as Veterans for Peace applied to march. It was rejected, but police waved the antiwar group onto the street halfway through, allowing it to trail the end of the official parade.

The Allied War Veterans Council sued over that move. The courts initially upheld its right to screen participants, but a federal magistrate judge eventually ruled that groups lacking permission could march along the same, full parade route, as long as they stayed at least a mile apart. That set the stage for yesterday’s two-part parade.

Marchers in the second parade said they also considered themselves heirs to the Irish immigrants who founded the procession, and others who have faced prejudice over the years.

“It got me angry that they didn’t allow the Veterans for Peace to march in this parade,’’ said Robert Fitzgerald, 64, of Marshfield, who marched in the second parade as a member of SEIU Local 509, which represents human services workers in the public and private sectors. “We need jobs in this country, not more wars.’’

Pat Scanlon, lead coordinator for Veterans for Peace, said he was disappointed not to be included in the main parade.

“However,’’ added Scanlon, a Vietnam veteran, after the second parade reached Andrew Square in the late afternoon, “I can tell you that our reception as we walked through South Boston was incredible.’’