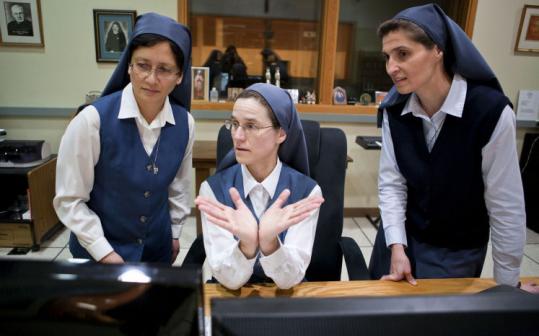 As part of its mission, the order runs a multimedia publishing house. Three sisters worked in the recording studio last week. (Kayana Szymczak for The Boston Globe)
By Lisa Wangsness Globe Staff / March 21, 2011

In a highly unusual case pending before the Supreme Judicial Court, an order of nuns is suing Cardinal Sean P. O’Malley, the Roman Catholic archbishop of Boston, after years of trying in vain to withdraw from a church-run pension fund.

Nuns fighting a cardinal in court is almost unheard of, and their lawyers say they are doing so only as a last resort.

“The Daughters of St. Paul are just as unhappy as they can be about having to do this,’’ said Michael C. McLaughlin, an attorney for the nuns.

Terrence C. Donilon, a spokesman for the archdiocese, said both parties have agreed to try mediation, and the archdiocese hopes to resolve the pension fund dispute.

“We have an incredibly longstanding and good relationship with the Daughters,’’ he said. “This is a disagreement that is going to be resolved, and hopefully within the coming weeks.’’

The lawsuit is the latest in a series of troubles for the pension funds overseen by the Archdiocese of Boston. The archdiocese’s pension fund for lay workers — the trust the nuns invested in, alongside many other independent Catholic organizations — is significantly underfunded. A pension fund for priests has also been troubled in recent years, although the archdiocese says the condition of that fund has now improved. And the cardinal last year supported the sale of the Caritas Christi Health Care system to Steward Health Care System, a for-profit affiliate of Cerberus Capital Management, in part because Cerberus agreed to cover unfunded liability in the hospitals’ employee pension fund.

The Daughters of St. Paul is a large, international order with about 135 members in the United States. About 60 live in Boston, where the order has a convent in Jamaica Plain. As part of their mission, the Daughters run a multimedia publishing house, Pauline Books and Media, which publishes Catholic books, e-books, iPhone and iPod applications, music, and educational materials.

The funds at stake in the lawsuit are not for the nuns’ own retirement, but for the retirement of their lay employees. The order has about four dozen employees and retirees in the Boston area and another four dozen or so nationwide.

The nuns have asked the Massachusetts Supreme Judicial Court to order the pension plan trustees, who include O’Malley and several of his top aides, to provide them with a full accounting of the nuns’ portion of the fund, or to rule that the nuns were technically never part of the church-run plan and to order the archdiocese to reimburse the nuns’ contributions, plus returns. The nuns are also seeking attorney’s fees.

The nuns believe they are owed $1.371 million, based on their estimate of the value of the assets in 2007. The archdiocese declined to say what it believes the nuns’ assets are worth, saying this is a point of disagreement that it hopes to resolve in mediation. But lawyers for the nuns say the archdiocese has contended that the nuns’ assets are worth nearly $500,000 less, because of a sharp decline in the value of the fund since the 2008 stock market downturn. The pension fund was more than 100 percent funded in 2007 but was only about 83 percent funded in 2010, according to the archdiocese.

The Daughters began contributing in 1989 to the Pension Plan and Trust of the Roman Catholic Archdiocese of Boston, which includes retirement funds for employees of the archdiocese, as well as a number of other Catholic entities.

In their lawsuit, which was previously reported by the Boston Catholic Insider blog, the Daughters say that they asked to leave the archdiocesan fund in 2005. They sought to establish a single pension plan for all their US employees that the Daughters would run themselves.

Their lawsuit alleges that representatives of the church-run plan were unable to supply data concerning the Daughters’ contributions and earnings required to effectuate the spinoff. The trustees, the lawsuit alleges, never kept separate records for each contributing employer — even though, it alleges, they were required to do so by the document establishing the trust.

Marcia S. Wagner, a pension law specialist whom the nuns hired in 2007, said she has never encountered such difficulty acquiring basic information to complete what she said should have been a straightforward matter.

“What struck me as most atypical is the incredible lack of responsiveness, the lack of any hard data or information, non-answers to very specific questions, and just endless, fruitless negotiations,’’ she said.

She added: “When you want to accomplish something that is par for the course and ordinary, and it becomes mired in arcane complexity, nonresponsiveness and non-answers, that will usually mean that something is amiss.’’

The nuns’ lawyers say that the plan failed to provide the nuns with basic paperwork regarding their participation in the fund, and that it never notified the Daughters when other employers joined the pension fund.

The trustees deny those allegations.

Carol Gustavson, the director of benefit trusts and plan administrator for the Archdiocese of Boston, said the archdiocese was moving ahead with the spinoff when it was dealing directly with the nuns in 2006. But that changed, she said, when the nuns’ lawyers became involved.

Gustavson also said the archdiocese had the relevant information to make necessary calculations — even if it did not regularly issue separate reports for each employer — and that that information was shared with the Daughters.

“The pension plan would deny that there has been any lack of information or the withholding of any information requested,’’ she said.

She said the archdiocese and the nuns shared responsibility for what were at times lengthy delays in exchanging information. Only recently, she said, did the nuns supply information the archdiocese requested demonstrating that the Daughters were equipped to oversee their employers’ own pensions — a step the nuns’ lawyers complied with but felt was unnecessary, since many of the Daughters have advanced degrees, and the order already runs its own 403(b) plan for the nuns themselves. The nuns’ lawyers said the archdiocese kept asking for additional information as a delay tactic.

The archdiocese maintains it had an obligation to ensure the beneficiaries of the nuns’ pension plan would be in good hands.

In their lawsuit, the Daughters also ask the high court to review last year’s sale of Caritas, asserting the transaction may have had “a direct detrimental impact’’ on their stake in the fund.

“We only wanted to receive assurances that what was being transferred was something that could be explained to us, to assure us that money that was not Caritas’s, and therefore potentially ours, was not being transferred into that Caritas deal to sweeten it,’’ McLaughlin said.

Archdiocesan officials, however, said they advised McLaughlin and Wagner, prior to the closing of the Caritas sale, that the Caritas pension fund was a separate trust and accounted for separately. McLaughlin said the archdiocese refused to show him the accounting.

The attorney general’s office declined to comment on the case, as did Steward Health Care System.