Brown amid the green 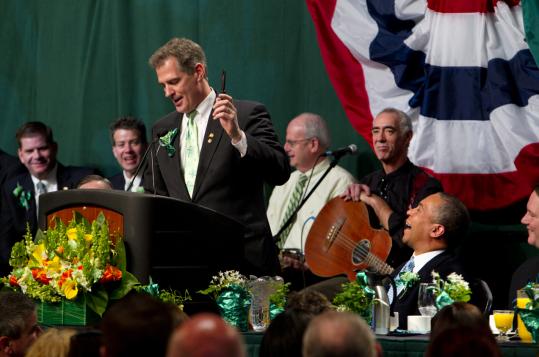 Among the leading Massachusetts political figures who trekked to South Boston yesterday for the neighborhood’s annual Saint Patrick’s Day political roast, it was Senator Scott Brown who made himself most at home among the conservative Reagan Democrats who helped him stage his election upset last year.

“You’ve been so, so nice, I actually want to invite you to a book-signing I’m having down at the Kennedy Library — or, as I like to call it, ‘the People’s Library,’ ’’ the Republican quipped. He recalled a campaign vow to reclaim “the people’s seat’’ after the near half-century tenure of Democratic Senator Edward M. Kennedy.

In one of the longest and most laugh-producing routines, Brown was unsparing in his barbs, even when it came to Mitt Romney, a fellow Republican, regarding his political advisers as he plots a second presidential campaign.

“I don’t know if anyone’s told Governor Romney that the president gets to only live in one house, not a couple of houses,’’ Brown said of Romney, who has houses in Massachusetts, on Lake Winnipesaukee in New Hampshire, and on the shore of the Pacific Ocean in La Jolla, Calif.

But Brown was most withering toward several Democrats with whom he served in the State House until his elevation to the US Senate a year ago.

He handed Governor Deval Patrick a cellphone, which he joked was pre-programmed with the number of Fidelity Investments. The Boston-based investment giant blindsided the governor last week by announcing, while he was on an overseas trade mission, that it was transferring 1,100 jobs out of state.

“’I’ve actually added the country code. When you’re out of the United States again, dialing from overseas, you’ll never be in the dark again,’’ the senator said with Patrick seated next to him.

Brown also mockingly dismissed suggestions that his senior colleague, Senator John Kerry, was out of touch.

“I don’t think he’s an elitist — and neither do his butlers,’’ he said. Brown also joked that at Kerry’s suggestion, he had re-registered his famous green pickup truck in Rhode Island; Kerry faced criticism for taking delivery of a new $7 million yacht in Rhode Island last year.

Kerry, chairman of the Senate Foreign Relations Committee, skipped the roast to appear on NBC’s “Meet the Press’’ to speak about the US military strikes in Libya.

And to House Speaker Robert DeLeo, who recently broke his ankle, Brown alluded to the legal problems faced by his predecessors as he joked that DeLeo would be forced to ride in a car for the St. Patrick’s Day parade following the roast.

“I’m not sure if he knows this or not, but this is the only parade in the country that the speaker gets to ride in a car for which the previous speaker actually made the license plates,’’ the senator said.

The breakfast was held at the Boston Convention & Exhibition Center. It is traditionally hosted by South Boston’s state senator, and incumbent Democrat Jack Hart marked his 10th anniversary in that role.

Although the gathering has been lampooned as dated or lacking its former wit and charm, yesterday it exuded the tradition and local pride for which Southie is famous.

Lanyards worn by event organizers and a photo inside the front cover of the program paid tribute to Thomas Butler, a Massport executive from South Boston who died of cancer earlier this month.

Butler also was recalled in a video tribute.

Before the television broadcast began, Hart introduced the two fire marshals and two nurses who were on hand in case of an emergency, each a pair of locals who received knowing applause from the crowd of several hundred.

Entertainment included step-dancing by Hart’s three daughters and a set of triplets who are his nieces, as well as renditions of “The Fields of Athenry,’’ “Grace,’’ and “God Bless America’’ by Irish tenor Ronan Tynan.

Patrick and his travels were the butt of many jokes. The governor largely submitted to the punishment before launching a routine he repeatedly said was nearly over.

As did several other speakers, Patrick traded conventional jokes for a comical song, in which the governor exhibited another talent by hitting all the high notes.

“Oh, Bobby boy, the slots, the slots are calling,’’ he sang to the tune of “Danny Boy,’’ targeting DeLeo, an advocate of slot machines at the state’s four racetracks. “From Wonderland to down by Raynham way; those racinos in love with which you’re falling, while I am gov, won’t see the light of day.’’

Mayor Thomas M. Menino, who was homebound on repeated occasions over the past year-plus after suffering injuries to both knees and one of his arms, poked fun at himself. He took the stage as a video screen showed a modified opening for “The Six Million Dollar Man,’’ a 1970s television show about an injured astronaut rebuilt with bionic body parts.

“The rumors of my ultimate demise have been greatly exaggerated,’’ Menino told the audience, which included many city councilors. “Sorry, all you wannabes.’’

Correction: This story stated that Senator John F. Kerry skipped the South Boston Saint Patrick’s Day breakfast and political roast to appear on NBC’s “Meet the Press.” He did appear on the news show as the annual breakfast was being held, but he was in Egypt and would have been unable to make the event regardless.