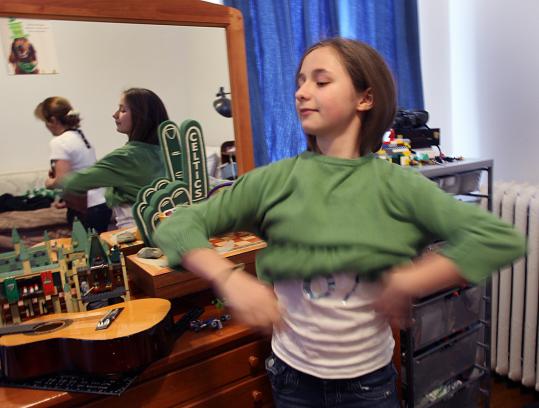 Being crowned Miss Ice-O-Rama comes with two primary duties: Ride in a convertible in the St. Patrick’s Day parade, and answer, many times, the question: What on earth is Miss Ice-O-Rama?

Technically, Miss Ice-O-Rama is the winner of a figure skating competition. But in South Boston, she is more — a symbol of yesteryear whose existence owes more to nostalgia than demand. This is because that big title and all its attendant glories — riding in a convertible! in the parade! — go to the best figure skater in a neighborhood that has almost none of them.

Last Sunday at the Murphy Rink, as a 12-year-old named Nicole Rezza prepared to take the ice to defend her title, she had only one concern.

“I just hope someone else shows up,’’ she said as she scanned the other girls in the rink, all of whom were wearing hockey skates as competitors in the Ice-O- Rama speed skating and puck shooting competitions.

Those hockey skates tell part of the story, said Tommy McGrath, president of the South Boston Citizens’ Association, which has been hosting the competition as part of its Evacuation Day events for at least four decades. The community has become a hotbed for women’s hockey, which has all but eclipsed figure skating. McGrath has his own evidence. He missed the Ice-O-Rama because he was in Michigan watching his daughter play for the UMass-Amherst women’s team.

“Miss Ice-O-Rama used to be huge, huge,’’ said Michelle White, a two-time winner of the competition in the 1970s who went on to train many future winners at a time when several dozen girls often competed for the title. “I remember getting my trophy, and it was almost as big as I was, and then riding in the parade. I felt like a movie star. Everywhere I went, everyone knew who I was,’’ said White, who is 46 and now lives in Florida.

Jennifer Jackson, Miss Ice-O-Rama 1983, is now 39 and chief of staff for state Senator Jack Hart. She remembers preparing for the competition like it was the Olympics.

“We lived and breathed it,’’ she said. “We skated whenever we could, and every one of us took private lessons so we could have a routine for Miss Ice-O-Rama. The whole year prior to the competition, that was your focus.’’

Now, Jackson, said, “it’s different, and it has been for a while.’’ And for that, she and many others blame pure numbers: In the era after the three-deckers went condo, there just aren’t nearly as many kids in South Boston.

As this year’s competition began, Rezza walked toward the ice still unsure if she was skating a solo.

“I have a plan in case anybody who figure-skates does come,’’ she said of the two-minute routine she’d prepared to the Katy Perry song, “Firework.’’

Her mother, Doris, a lawyer, followed with a small boombox and a CD.

When Rezza stepped to the ice, she looked relieved to see that she was not alone. There was another girl, wearing a yellow sweater with a green scarf and gloves and . . . hockey skates.

As Rezza warmed up, she took off her coat to reveal a proper figure skating costume — Spandex, sequins, tights — which surprised one of the mothers in the crowd.

Yes she is, and the reason Rezza became a real figure skater — she practices four days a week in Allston — was not to win the Miss Ice-O-Rama crown but to defend it. A few years ago, simply because she was there, she was named Miss Junior Ice-O-Rama, got “a really huge trophy,’’ and wanted more.

As her mother hit play on the boombox, Rezza began her routine — with lots of spins and jumps — while her competitor dutifully skated around the boards, occasionally kicking a leg into the air. The winner was evident, though Rezza had a slight moment of confusion afterward when she was handed the runner-up trophy. The trophy company forgot to send a winner’s trophy.

Following the win, Rezza sat in the lobby eating a mid-morning slice of pizza from the snack bar, assessing her performance. “I didn’t skate as well as I wanted to, and I fell a few times,’’ she said.

But it was over, and now she had to turn her attention to what is becoming a regular role for her, being the tween face of Southie in the St. Patrick’s Day parade.

In a neighborhood that holds tight to tradition, there have always been two reserved spots for local girls in the parade that is its biggest event: one for Miss Ice-O-Rama, and one for Miss South Boston. But the Miss South Boston pageant ended last year; so now it’s just the girl with the funny title.

Winning the competition may create nary a ripple nowadays — Rezza said it would mean almost nothing to her sixth-grade classmates at the Murphy School in Dorchester — but riding in the parade remains a big deal.

“It was always so exciting,’’ said Lauree Maiullari, who won the competition six or seven times (she can’t remember). “I would see everyone in my class. I had friends run out and give me flowers. People I didn’t even know were cheering for me,’’ said the third-year student at Northeastern University.

Yesterday, at her home on Farragut Road just behind the rink, Rezza prepared for her big moment in the parade by sorting through a pile of green accessories that her mother was piling on the couch. Her choices included a sash that read “Irish Girl at Heart,’’ mardi gras beads, a shamrock lei, and a neon green hair piece. Rezza tried each on, then hung them around the neck of her riding companion in today’s parade, a puggle named Angel, who sat patiently while Rezza’s twin brother, John, put flashing green sunglasses on her face.

Rezza couldn’t commit to a getup. A lot would depend on the weather, and she and her brother were having a hard time calming down because they’d received the news that morning that they had both won something that is still highly competitive in this city: acceptance into Boston Latin School.

Winning Miss Ice-O-Rama has become an annual thing for Rezza, so it’s not a huge deal anymore. And there doesn’t appear to be anyone stepping up to challenge her reign in the near future. But Doris Rezza thinks there’s some hope for the future of the competition, one that she whispers when her daughter is out of earshot.

“I want to give a pair of figure skates to some of these hockey players and see what they can do,’’ she said. “Those girls are good.’’