The faithful reach out to Japan with the power of prayer 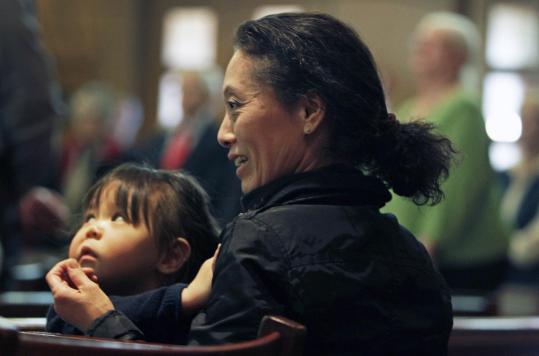 Dozens of people from various churches and religious traditions gathered yesterday at an interfaith service on Beacon Hill to pray and lend their support for those affected by the devastation in Japan.

The worshippers came to The Paulist Center Boston, a Catholic facility, to pray for the dead and displaced victims of the tsunami and nuclear disaster in Japan.

Different speakers read from the Bible and the Koran and quoted Hebrew scripture.

Twin projections of origami cranes were shown on each side of the suspended crucifix in the chapel, and many of the speakers quoted verses of hope and resilience in the face of seemingly insurmountable adversity.

“In the spirit of human love and compassion, we can support one another, we can love one another in these dark days and beyond,’’ said Sheila Le Duc, one of the service’s speakers, from the center.

Many at the service spoke about the importance of prayer in times like these, especially when the outcome of the disaster remains so uncertain.

Yumiko Ishizawa, a Brookline resident who spoke at the event and is a native of Japan, said afterward that it was difficult for her to be away from her homeland and she wished she could return to help.

“I’m lucky. My family are not injured so they don’t need any help from me,’’ Ishizawa said as she held her 2-year-old daughter, Athena. “But the most frustrating thing that I feel so sad about is that I’m not able to be there.’’

Ishizawa said that as a Catholic, she took solace in praying for her home country. She also noted that it was bittersweet because of her feelings of helplessness.

“To be honest, I feel two ways about it,’’ she said. “One, it’s good that we can pray; even when we can’t be there, we can pray. But the frustration is that I can only pray, I can’t do anything else. It’s good God gave us this ability to pray, but at the same time I want to do something. I want to be there.’’

One of the organizers, Bob Bowers, a member of the pastoral staff at The Paulist Center, said he felt compelled to hold the interfaith service as a way of using the power of prayer to help those displaced and of showing solidarity with people of a different culture, such as Japan.

“We have just a feeling among ourselves of overwhelming sadness and we thought, what can we do?’’ Bowers said. “We believe the power of God will be present here, and will also be present for the people of Japan in some fashion.’’

Peggy Lavoie, a Paulist parishioner from Beacon Hill, said watching the horrific saga unfold in Japan day after day has been excruciating, and she hoped that her own prayers could make a difference.

“My heart has just been broken,’’ Lavoie said. “There’s so little we can do, but I felt that in some way, in coming together to pray, our prayers will somehow make it over to Japan.’’