Chatted about royalty, estate, how to meet rich women 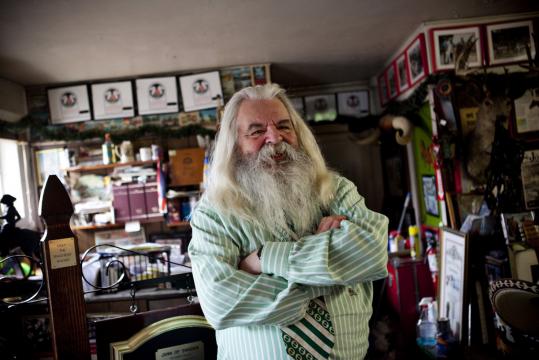 “They didn’t like each other,’’ Jann Eldnor said in an interview at his salon in the small community of San Marino, Calif. (Eric Grigorian for The Boston Globe)
By Maria Cramer and Shelley Murphy Globe Staff / March 18, 2011

SAN MARINO, Calif. — When the man who would eventually call himself Clark Rockefeller came in for his haircut, he would chat with his stylist about many topics: his family estate in London; his ancestral connections to royalty; and the best way to meet the widowed and divorced older, rich women in town.

But 26 years later, one subject remains startlingly relevant — the tension between him and his landlord’s son, John Sohus.

“They didn’t like each other,’’ Jann Eldnor said yesterday during an interview at his salon.

Rockefeller, who then went by the name Christopher Chichester, would get his hair cut every two weeks and described Sohus as “strange,’’ Eldnor said. The theory around town, Eldnor said, was that Sohus believed Rockefeller, a ladies’ man who was known for charming elderly society women, was trying to take financial advantage of his ailing mother.

Now, Eldnor said, many in town wonder whether that animosity led to the death of Sohus, who vanished in 1985, along with his wife, Linda. At the time, the couple were living with Sohus’s mother, who rented a guesthouse on the property to Rockefeller. John Sohus’s remains were found buried on the property in 1994 and identified recently.

Eldnor has told his account to detectives in the Los Angeles Sheriff’s Department, who are working to extradite the man who now calls himself Rockefeller from Massachusetts, where he is serving a four- to five-year sentence for kidnapping his daughter in 2008.

Rockefeller, a German national who came to the United States as a teenager and whose legal name is Christian Karl Gerhartsreiter, was charged earlier this week with Sohus’s murder.

“Part of the reason that Rockefeller was charged was, ‘Who’s going to believe him?’ ’’ Denner said yesterday. “He’s changed identities and obviously appears to be deceitful. That gives people a reason to dislike him and to want to punish him. That’s why it took 26 years to charge him. But that doesn’t make him a murderer.’’

Lieutenant Wes Sutton of the Los Angeles Sheriff’s Department said investigators believe Gerhartsreiter had a motive to kill Sohus, but would not elaborate.

Sutton, who declined to describe any of the evidence that led police to charge Gerhartsreiter with murder, said police also believe Linda Sohus is dead.

“No one has heard from her or seen her,’’ Sutton said.

There are no other suspects in the killing of John Sohus, Sutton said during an interview yesterday in the department’s homicide bureau in Commerce, a city about 12 miles south of San Marino. “They had no enemies,’’ he said of the couple, whom he described as happily married. “They were friendly people.’’

Shortly after the Sohuses vanished in February 1985, a relative reported them missing.

“It was worrisome,’’ recalled Lila Hadsell, a former San Marino police officer who took the report and is now chief of police in Baldwin Park, Calif. “They were a young couple just recently married . . . it was kind of strange that they just disappeared.’’

West Covina Police Chief Frank Wills, who was San Marino police chief from 1992-1998, said investigators considered Gerhartsreiter “a person of interest’’ in the Sohuses’ disappearance from the beginning, noting that he vanished soon afterward.

“This is one of those great imposter stories,’’ said Wills, adding that Gerhartsreiter was able to charm his way into the affluent community’s social fabric while passing himself off as a descendant of British royalty.

In 1988, Gerhartsreiter, using the name Christopher Crowe, surfaced in Greenwich, Conn., driving John Sohus’s pickup truck. But by the time California authorities learned of the case, he was gone.

By then, Wills said, police knew that the man wanted for questioning in the Sohus case was Gerhartsreiter and renewed efforts to track him, even getting the television show “Unsolved Mysteries’’ to air a segment about the case. But he remained elusive.

In 2008, Gerhartsreiter abducted his 7-year-old daughter, Reigh, from a Boston street, leading the FBI and local police on a nationwide search that ended with his arrest in Baltimore. Since then, cold case investigators in Los Angeles have pored through reams of police reports and interviewed dozens of witnesses.

Yesterday, Eldnor recalled how the young man known as Chichester ingratiated himself among the well-to-do in San Marino, a town of about 15,000. “He could talk to doctors, Nobel prize winners for Cal Tech,’’ he said. “He could talk to financial people. He was a young man, but he acted like an old guy.’’

The 67-year-old stylist, a Swedish immigrant who wears his silver-blond hair and beard long and flowing, said Gerhartsreiter would ask the best places to meet old, rich women.

“He would kiss a woman’s hand like she was royalty,’’ Eldnor said. After living in and out of the homes of society women, Gerhartsreiter settled into Ruth Sohus’s house, Eldnor said. She was often sick, Eldnor said, and one of Gerhartsreiter’s friends suggested that he live there in exchange for running errands for her. Eldnor said many people in town believed that Sohus was not only suspicious of Gerhartsreiter, but that he also was uncomfortable with a notorious flirt living so close to his wife.

The last time Eldnor said he saw Gerhartsreiter was in early 1985, when he came into his shop, settled into the barber chair, and told him this would be his last haircut.

“ ‘I’m leaving for London. An important relative has died and left me an estate and I have to take care of it,’ ’’ Eldnor recalled him saying. “ ‘Thank you for the haircuts. It was nice to know you.’ ’’