Motorist, 91, is injured in train crash 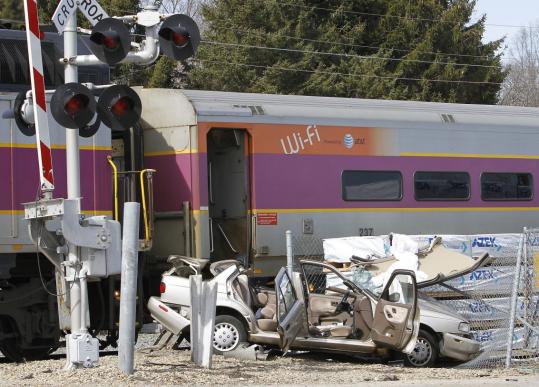 A wrecked car sat at the site of a late-morning crash on the commuter rail tracks at East High Street in Avon. The driver was taken to a hospital with injuries that were not life-threatening. (Robert E. Klein for The Boston Globe)
By Martin Finucane Globe Staff / March 18, 2011

A Boston-bound commuter train ran into a car that was on the tracks in Avon yesterday, injuring the motorist, the MBTA said.

It was unclear why the car was on the tracks. The warning gates were in the down position, Pesaturo said in a prepared statement.

He said the driver, Ann Kireilis, 91, of Brockton, was “conscious and alert’’ when taken to Brockton Hospital. A hospital spokeswoman said Kireilis was in stable condition yesterday afternoon.

The accident involved Old Colony Train 014. Buses were sent to the scene to provide transportation for the passengers, Pesaturo said. Shortly after 1 p.m. the train was released by investigators and regular service resumed on the Middleborough/Lakeville Line, he said.