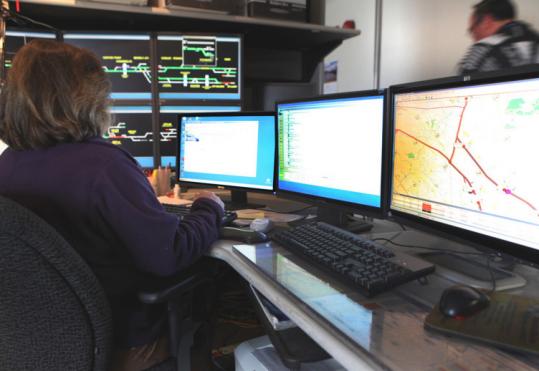 Remember that subzero day in January when the Arctic air crippled just about every mode of the T, leaving thousands of riders wincing as they waited for delayed trains and buses?

That was Jan. 24. That afternoon, MBTA General Manager Richard A. Davey acknowledged the frustration of commuter rail riders, who had been complaining in droves that their service alerts arrived too late and were too lacking in detail to be helpful.

“T-Alerts on commuter rail need to be improved, and it will be improved this week,’’ Davey said, explaining that commuter rail dispatchers lacked the power to send alerts themselves; instead, they had to call subway dispatchers and ask them to send the alerts when they got a chance. Davey promised to eliminate the middle man.

One week passed, then two, then three. In mid-February, Davey said the alerts system would improve by March.

Now it’s March. T-Alerts — the messages posted on MBTA.com and sent by text or e-mail to those who sign up — are still being done the old way.

Soon that will change. Behind the scenes, dispatchers are being trained to take over, and the T says the new system will go live in 10 days.

The T invited me to take a closer look at the system last week, at the East Somerville industrial park office where the Massachusetts Bay Commuter Railroad, the T’s commuter rail contractor, dispatches North Station lines. (Dispatchers on South Station lines work at a Boston facility.)

Each line has a dedicated dispatch desk, where the dispatcher communicates with train and track workers and sits before a dozen computer screens that show a map of the line. The map is broken down not by familiar station names but by track sections and interlockings, where switches and signals allow trains to move safely from one track section to another. Color coding shows which sections are empty, which contain workers, and which are cleared for a train to proceed inbound or outbound.

If a problem arises — say, a locomotive failure on the Lowell Line or a stuck drawbridge on the Newburyport/Rockport Line — that line’s dispatcher can alert another dispatcher who staffs a central customer service desk. That person can punch in messages that get beamed to LED signs on station platforms.

But to send an alert that would reach a customer’s phone or computer, that MBCR dispatcher must instead call MBTA subway dispatch and ask them to do it — often at a time when subway dispatchers already have their hands full.

On a smooth day, the commuter rail might generate five or six alerts; on a snowy day 30 or more — about twice the number for the subway, but fewer than the bus.

The new alerts will be more timely and detailed, because the MBCR dispatchers who know the train system will be typing the alerts themselves. “Make no mistake, this will be an improvement,’’ said Scott Farmelant, an MBCR spokesman.

But customers hoping for a miracle may find the change modest.

That’s because what appears to be a 30-minute delay when a problem arises may get shorter or longer as the train moves down the line (or stays stalled). Sometimes riders who have stayed home or retreated to a warm car miss a train that arrives sooner than they expected.

“This is information to allow you to make an informed decision about your travel pattern. It’s not an ‘oh, go buy two cups of coffee at Dunkin’ Donuts and get to the station 20 minutes late’ [alert] because you might miss your train,’’ she said. “We don’t want you to miss your train. We want you to know if you’re standing there, this is the reason you’re standing there.’’

There is more hope on the horizon. Davey has said real-time applications for commuter rail are a 2011 goal.

A little over a year ago, the T began installing what’s known as the Passenger Train Information System, onboard computers driven by GPS that speak to countdown signs on station platforms and that also power automated (and sometimes balky) next-stop announcements aboard commuter rail coaches. The T is working with software developers to translate that data into a useful feed that can be harnessed for applications.

That could yield predictive phone or Web applications for commuter rail in a matter of months. Just don’t put a date on it yet.