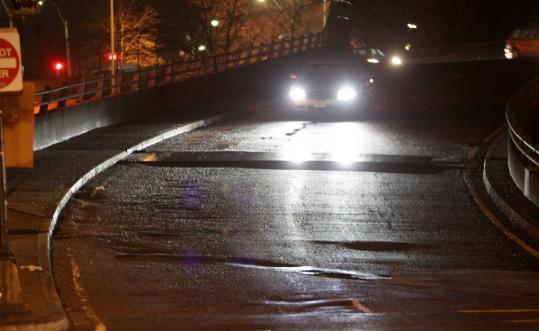 The 12-foot pothole that ruptured across the offramp of an elevated roadway near Kenmore Square yesterday sent debris raining down on the Muddy River and snarled traffic in the area during the morning commute. It also renewed attention on the Bowker Overpass, a 1960s relic that some neighbors and officials call an eyesore that should be removed.

Heavily used, if not well-known by name, the Bowker is the overpass that connects Storrow Drive to Boylston Street, crossing Beacon Street, Commonwealth Avenue, the Massachusetts Turnpike, and Ipswich Street; an array of onramps and offramps gives it a tentacled look from the sky.

Yesterday, the roughly foot-wide, 12-foot-long pothole opened on an offramp that feeds Charlesgate East and Commonwealth Avenue, forcing the state to close the ramp for about 4 1/2 hours to temporarily patch it with steel plates. That prompted a flurry of comments on Twitter and elsewhere, with one motorist deeming it an “early winner for the Boston Pothole of the year.’’

The state planned to return last night to fill the hole with hot-mix asphalt, said Adam Hurtubise, a spokesman for the De partment of Transportation.

No one was hurt when the debris fell, because it cascaded into the river and onto the grass nearby. The parts of the Bowker that pass above traffic and pedestrian areas have been shielded with plywood after a football-sized chunk of concrete fell and struck a windshield in 2009, Hurtubise said.

The overpass is still considered safe, state officials said, though the deck has been deemed structurally deficient. The Bowker is not included in either the state’s annual road and bridge budget or the Accelerated Bridge Program, a $3 billion plan enacted on Beacon Hill in 2008.

Transportation officials are now considering whether to transfer savings from other projects to cover more Bowker repairs, intended to last five years. That would take the half-mile-long overpass to its 50th birthday, and allow state officials time to consider whether the Bowker should be rebuilt or replaced.

Some neighbors, business owners, and officials hope the overpass will be eliminated as a vestige of mid-20th-century highway construction, an era that favored suburban commuters at the expense of urban aesthetics. The Bowker blots out Charlesgate, the historic Emerald Necklace park that Frederick Law Olmsted designed to link the Back Bay Fens and the Charles River.

“It’s just been a blight on that section of the city,’’ said Boston City Councilor Michael P. Ross, who represents the area. He likened the Bowker to the Fitzgerald Expressway, the elevated section of Interstate 93 that bisected downtown Boston before the Big Dig.

A Friends of the Charlesgate group has been gathering signatures to urge the state to consider leaving overpasses only above Storrow and the Pike, while sending traffic to surface roads in between. They say selective widening, roadway engineering, and retiming of lights could accommodate traffic, saving money and restoring the beauty of Charlesgate. It would also reconnect Kenmore and the Back Bay.

“This is a historic opportunity for the state and the city to rectify a terrible urban highway decision from the 1960s and restore a beautiful parkland, the Charlesgate,’’ Hef Fisher, one of the leaders of the Friends group, said by e-mail. “It is time to give back to the city of Boston its ‘gateway to the Charles’ as envisioned’’ by Olmsted.

State Representative Martha M. Walz, a Back Bay Democrat, said the prospect is worth exploring.

“The idea of tearing down the overpass is worth studying, so that we understand how we can manage traffic and potentially eliminate an eyesore,’’ she said. “It may be quite feasible.’’

The overpass was built for $3.5 million and dedicated in October 1966, named for the late Philip G. Bowker, a state senator from Brookline who had served as associate commissioner of the Metropolitan District Commission. The MDC and its successor, the Department of Conservation and Recreation, managed the overpass until 2009, when it was turned over to the expanded Department of Transportation.

That department is contemplating projects to downsize, where appropriate, some of what state Secretary of Transportation Jeffrey B. Mullan has called “over-engineered’’ and “structure-intensive solutions’’ — elevated or depressed 20th-century highways that were built for more traffic than necessary, without consideration for bicyclists and pedestrians. The list includes the Casey Overpass in Jamaica Plain, the McGrath-O’Brien Highway in Cambridge and Somerville, and Rutherford Avenue in Charlestown.

Department officials have not commented specifically on Bowker’s future, but the elevated structure has been controversial since it debuted. A story in the Globe in 1965 marveled at its potential to “break one of the worst traffic bottlenecks in the city,’’ but two years later, the architectural historian and author Bainbridge Bunting criticized the overpass for having “desecrated one of the loveliest city parks in America.’’