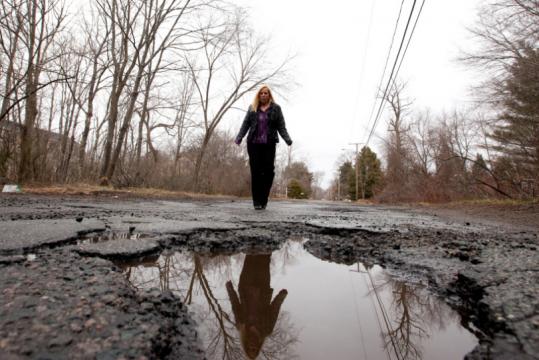 A malevolent new presence has joined the ranks of social media, posting grim pictures of its hideous countenance, tweeting declarations that evoke the wildest ranting of Charlie Sheen, and generally looking and sounding really, really bad.

“No one can change me,’’ reads a quote from this personality’s newly established Facebook page. “I am a monster!!!’’

The page belongs to Alger Street in Brockton, a stretch of potholed, pitted asphalt that has crushed tires, shattered shock absorbers, and rattled the teeth of drivers for years, if not decades.

You know that expression, “to look like a mile of bad road?’’ Alger Street embodies it.

A couple of days ago, Christine Brennan, who has been using the street for 13 years, set up the page to draw attention to the sorry condition of the thoroughfare. The page, first reported by The Enterprise, has acquired hundreds of friends and dozens of posts by people who use the road.

In making the page about this mean street, Brennan said, she was borrowing from other protesters who took to the streets after being inspired by social media sites.

“They took over Egypt with a Facebook page,’’ she said with a smile. “We figured we could get Alger Street fixed.’’

Brennan, a realtor who lives in East Bridgewater but uses the road to commute, said her vehicle sustained more than $1,200 in damage in a recent encounter with the street.

Her appeal to the city of Brockton to compensate her for the losses was denied, she said. She says the houses on the street have lost value because of the road’s condition.

“Your two biggest investments are your house and your car,’’ she said as she surveyed the gaping, jagged-edge potholes. “Both of mine have sustained crazy depreciation.’’

Alger Street might not be as rough as, say, the road from Kunduz to Pul-e-khumri after months of airstrikes against the Taliban. But it is pretty rough. Some of the potholes are 5 feet wide and half a foot deep, but the real problem is the frequency of the blemishes.

“What do you people do, drive tanks on this road?’’ shouted William White as he bounced through a rough stretch in his pickup truck. White said the road has been bad “for the 40 years on and off that I’ve been driving it.’’

Everyone in New England knows a bad stretch of road, especially after winter. But Alger Street has a design flaw that makes repairing it difficult, if not pointless: It is flanked by two stretches of wooded land that fill with water after heavy snow or rain.

When water gets into any holes or cracks, said James Lambrechts, an assistant professor of civil engineering technology at Wentworth Institute of Technology, and temperatures dip below freezing, the liquid turns to ice and expands, making the holes larger.

When workers try to fill these holes, some water remains inside the road, Lambrechts said. This makes it hard for the filling material to bond to the road, and causes it to rise above the surface. Once a road has experienced these problems over a long period of time, he said, not much can be done.

“When you get a street that’s very badly potholed, about the only remedy is to dig up all the asphalt,’’ said Lambrechts.

Brockton Public Works Commissioner Michael Thoreson agreed that Alger Street should be reconstructed. However, he estimated that the project would cost about $1 million — about two-thirds of the town’s nearly $1.6 million yearly budget from the state through the Chapter 90 Program for road construction.

“It is going to require a complete redesign, including drainage,’’ Thoreson said. “It would be a fairly intense and involved process.’’

Thoreson said the street is on a list to get fixed, but city officials focus first on repairing main roads, then secondary roads followed by the remaining streets.

Alger Street, as it says on its Facebook page, may be “one of the meanest, ugliest roads you’ve ever seen,’’ but in Brockton it is also a remote residential street.

But do not tell that to Linda Souza, a personal care assistant whose home is on a particularly ravaged section of Alger Street. Souza’s daughter, Felicia, requires a wheelchair to travel, and their specially equipped van can barely make it in and out of their driveway.

“You just fall into this big hole,’’ she said.

But the street does not care, if you go by the Sheen-esque first tweet on its Twitter site, #algerstweet.