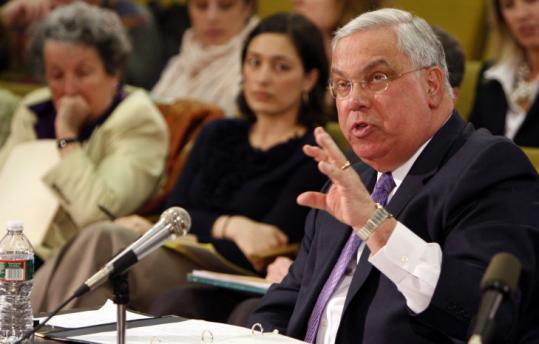 But the mayors and selectmen made an effort to distinguish their demands from the polarized battle over collective bargaining in Wisconsin and other states, saying that in Massachusetts, organized labor needs a seat at the table.

Facing an auditorium crowded with municipal managers and union leaders, Menino ticked off a list of alarming figures. The $300 million Boston pays annually for employee health care will increase $20 million this year, he said, and $100 million over the next five years. For every dollar the city spends on health insurance, he said, it spends a nickel on snow removal and community centers, a penny and a half on summer jobs, and a penny on serving the elderly.

“Cities and towns might as well change the name of our government buildings from City Hall to City Health Insurance,’’ Menino told the Joint Committee on Public Service. “That’s the only service we will be able to provide.’’

But the mayor criticized efforts in other states to push “an antilabor agenda cloaked in the responsibility of balancing a budget’’ to weaken collective bargaining by public employees. Not letting labor have a “seat at the table,’’ Menino said, would hurt the middle class and cause economic disparities to grow.

“I like my employees. I like what they do,’’ said Mayor Kimberley Driscoll of Salem. “I want to keep them. That’s why we need to make changes.’’

When Salem asked employees to increase their health insurance contributions from 5 to 15 percent, the city’s eight unions blocked the move, Driscoll said. This year, Salem expects its insurance costs to rise by as much as $1 million.

A coalition of municipal leaders has been pushing for public employees to pay a greater share of their health care costs. Their proposal would give cities and towns the same authority as the state to change employees’ copayments, deductibles, and coinsurance without collective bargaining. It would save cities and towns an estimated $100 million across the state, municipal leaders said.

In January, Governor Deval Patrick aligned himself with Menino and other mayors who want a commission — with representatives from labor and management — to designate the cost spilt for health care plans. State law blocks municipal managers from shifting costs unless unions agree, something most have been unwilling to do.

To preempt yesterday’s hearing, labor leaders held a press conference at the State House on Monday and offered concessions that they said would provide significant savings to cities and towns and preserve “sacrosanct’’ collective bargaining rights.

The proposal included a 45-day window this spring for municipal workers to negotiate changes to health plans. After testifying yesterday, Menino said labor’s offer was “a good beginning.’’

“We want to work with these folks,’’ said Bruce T. Boccardy, president of SEIU Local 888, which includes about 2,000 employees of the City of Boston. “Nothing is off the table. We want to provide affordable health care to all workers and everybody in the Commonwealth.’’

“None of this really addresses the cost,’’ Zellner said. “The cost of health care is going to continue rising. This is just about cost shifting.’’