Foxborough gets tough on public inebriation 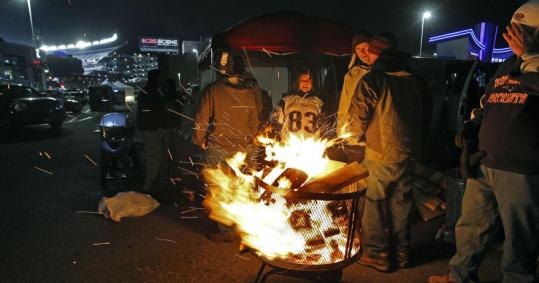 Fans tried to keep warm outside Gillette Stadium prior to the Patriots’ game against the New York Jets in December. A record 95 people were taken into protective custody that night, officials say. Another 16 were arrested for crimes. (Jim Davis/ Globe Staff/ File)
By David Abel and Michele Morgan Bolton Globe Staff | Globe Correspondent / March 9, 2011

FOXBOROUGH — In the past three years, as local bars and tailgaters have multiplied, the Patriots’ hometown has seen a surge in public drunkenness, with police carting off hundreds of people either passed out on bar stools or otherwise showing signs of being inebriated.

Since 2007, when the town issued 15 additional liquor licenses inside and outside Gillette Stadium, the number of people deemed publicly intoxicated and taken into protective custody has nearly tripled, with police detaining 933 last year.

To curb the problem, a Special Town Meeting this week approved a $200 fine for anyone taken into protective custody for public intoxication, making Foxborough and Dedham, according to the state attorney general’s office, the only two towns with such bylaws in the state. Town Meeting also imposed the same fine for those caught smoking marijuana in public.

“We have a huge, growing community problem with people who are impaired by alcohol and who put themselves and other people in the community in jeopardy,’’ said Edward T. O’Leary, chief of the Foxborough Police Department. “Education programs have not been successful in curbing the continuing trend. We need to do something about it.’’

Officials at the American Civil Liberties Union of Massachusetts questioned how the bylaw would be implemented. Before the new fines take effect, they need approval from officials at the attorney general’s office, who have yet to review the plan.

“There is a subjectivity problem,’’ said John Reinstein, the ACLU’s legal director. “What’s to determine public drunkenness? Is it the same as drunken driving? What’s the standard, how will it be enforced, and is there some fair way of screening out those who shouldn’t be taken into custody in the first place?’’

He added: “The question is whether the town is unfairly extracting money from people who shouldn’t have to subsidize Foxborough and the New England Patriots.’’

Jeff Cournoyer, a spokesman for the Kraft Group, which owns the stadium and the , declined to comment.

O’Leary insisted the bylaw has nothing to do with boosting town revenues. He said the fines cover the costs of taking someone into custody, including the use of hazmat crews to hose down cells where people have become sickened by drinking.

“It’s ludicrous to suggest that this is for funding,’’ he said.

Foxborough receives a steady stream of money from the Kraft Group, including nearly $2 million a year from ticket sales, $1.8 million a year to pay local and volunteer police details for stadium events, and $179,000 in administrative fees, town officials said.

When asked how his officers determine whom to take into custody, O’Leary said they use common sense. “They determine whether the person is unaware of their surroundings or they exhibit the odor of alcohol,’’ he said. “Being passed out or being covered in vomit would be another indication.’’

He said those who agree to take a breath test are released if they have a blood-alcohol level of 0.05 percent or lower. Those put into protective custody are usually held until they are sober.

O’Leary said the law had nothing to do with the deaths of 20-year-old Debra Davis of Milton and her friend Alexa Latteo, 19, of Mansfield, who were killed in a 2008 car crash after a day of drinking at a music festival at Gillette Stadium.

“I want people to think, ‘Instead of having that gin and tonic or that beer, that maybe I’ll have a bottle of water,’ ’’ O’Leary said.

The 100-to-47 vote Monday night was inspired in part by a record 95 people taken into protective custody and another 16 people arrested for crimes on the night in December when the Patriots trounced the .

“In the last six months, we’ve already done more than we did in the 12 months before that,’’ said town administrator Kevin Paicos. “We’re on a pace to eclipse what we did last year, and we are fast outstripping our resources.’’

Paicos said town officials are also concerned about upcoming concerts at the stadium. “Hopefully, this will be a deterrent,’’ Paicos said. “And if $200 doesn’t seem to make an impact, then eventually we’ll get to the level where we’ll raise it again.’’

The idea of police officers using their judgment to determine whether someone drank too much and should be subject to a fine bothered some bartenders.

“If it isn’t a state law, I feel it’s unfair to focus on us here in Foxborough,’’ said Matt Egan, a barman at Waxy O’Connor’s Irish Pub on Main Street. “I feel like we’re not going to be treated fairly. It’s more of a problem at the stadium. It just seems open to a lot of potential abuse.’’