For parking, a choice of coins or plastic 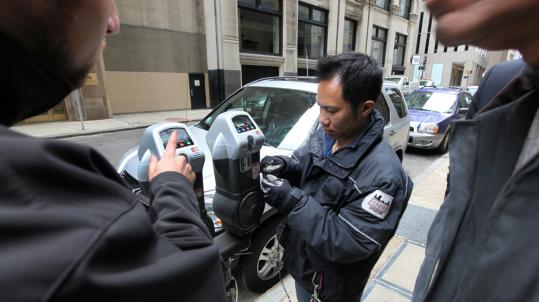 Motorists parking in some of the busiest sections of downtown Boston can stop fumbling for quarters to feed the meter, at least for the next several months.

Yesterday the city Transportation Department upgraded 144 single-space parking meters with equipment that allows drivers to pay with a or , as well as quarters.

Sheryl Furnari of Chestnut Hill parked her Nissan Altima for free yesterday at a space outfitted with one of the new meters on Cambridge Street yesterday afternoon, because the city does not charge for on-street parking on Sundays.

But the 27-year-old attorney, who parks on the street two or three times a week while she attends classes at Suffolk University, said she welcomes the new payment options.

“It’s more convenient,’’ said Furnari, who has had to regularly ask clerks at a nearby to exchange her dollars for quarters to feed the coin-operated meters.

City officials decided to launch the pilot program following the success of the multispace meters offering credit card payment on Newbury and Boylston streets in the Back Bay and in the Bulfinch Triangle downtown, which were put in place three years ago, according to Transportation Commissioner Thomas J. Tinlin.

“We’re pretty excited about the opportunity to provide more customer choice to the city of Boston,’’ Tinlin said yesterday in a telephone interview.

Tinlin said it made sense to expand the program to some of the busiest downtown areas, after more than 40 percent of all drivers parking at the multispace meters have paid with plastic.

While there is no firm timeline for the pilot period, officials will likely monitor the meters through next winter before making a decision on whether to continue using them, Tinlin said.

City transit workers installed the meters yesterday near Government Center, along parts of Cambridge, New Chardon, Union, and Devonshire streets. Officials said the work began shortly after 6 a.m. and continued through the afternoon.

Workers tested each meter after its installation. Tim Hallahan, a Transportation Department operations manager, tested one of the sleek new swipe systems for the benefit of a Globe reporter on Devonshire Street.

He slid a card through a slot in the meter and pressed two blue buttons to show how cardholders can subtract or add 12-minute, 25-cent increments to their final tally before hitting a green button marked OK to finalize the payment.

Officials said all of the meters appeared to be working well during the tests yesterday.

Tinlin said solar panels on the meters should keep the batteries running for about one year. And, he said, a wireless notification system will immediately alert transit officials to a damaged meter, so repairs will be made more quickly.

He said officials will have to see how the meters respond to the full range of New England’s punishing weather before deciding whether to proceed from the free pilot program — with materials provided by the San Diego-based IPS Group Inc. — to a permanent program, which would be put out to bid.

“Just because [the system] is working well in March doesn’t mean it’s working well in the dog days of summer,’’ Tinlin said. “Frankly, I’d [also] like to get a winter out of them’’ before making a decision.

Wright said she usually advises friends from out of town to park at a subway station and take a train into the city.

“I think it’ll probably be handy for some people,’’ Wright said.