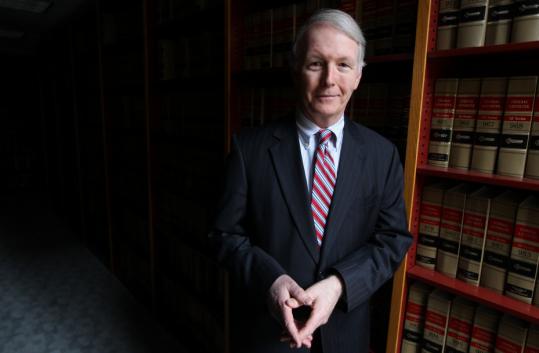 Belmont lawyer Ralph Sullivan will argue before the Supreme Judicial Court that he should not have to pay $75 to contest a $100 traffic ticket he received. (Bill Greene/ Globe Staff)
By David Abel Globe Staff / March 7, 2011

Two years after state lawmakers imposed fees for fighting traffic tickets, the number of appeals has dropped, raising questions about whether the effort to weed out frivolous cases and raise revenue has hindered access to courts.

The fees, which can cost more than the tickets, have riled those who insist they were wrongly cited.

“It’s ridiculous,’’ said Charlene Allen, 27, of Dorchester, who paid $75 to fight a $50 citation for an expired inspection sticker because she worried about an increase in her insurance premiums. “It just doesn’t make sense to me that you should have to pay a fee to go before a judge, especially when it’s the same cost as the ticket.’’

Court clerks say the fees have raised millions of dollars for the courts and reduced the caseload. Court officials could not provide precise numbers, but the Globe’s calculation, based on the number of tickets, showed that fees in fiscal 2010 should have raised more than $6 million for the judicial system.

Dan Hogan, clerk magistrate at Boston Municipal Court, said the additional revenue has been vital to the functioning of the courts. He said his office has lost more than half of its clerical staff and nearly 30 percent in direct state aid in the past five years.

“There’s no question about it that we need the money,’’ Hogan said. “We continue to do more with less. If we lost that source of revenue, we would have to figure out where else to take it from. There’s really nothing left for us to cut.’’

But the controversial fees are facing a legal challenge in the state’s highest court.

The Supreme Judicial Court on Thursday is scheduled to hear a case questioning the constitutionality of the 2009 law, which imposed a fee on drivers appealing their tickets and more than doubled the cost of taking it a step further and appealing to a district court judge.

The case was brought by Ralph Sullivan, a 62-year-old Belmont lawyer, who plans to argue that he should not have had to pay $75 to contest a $100 ticket he received for allegedly failing to travel in a marked lane in Salem. He was eventually absolved in district court, where he filed a motion seeking a refund of the fees he paid to appeal. That motion was denied and later dismissed by an appeals court, before the SJC took the case.

Sullivan said that the drop in the number of appeals reflects the unfairness of the fees.

“This is empirical evidence that the fees being charged are having an actual and demonstrable effect on people’s access to courts,’’ he said. “They are inhibiting citizens’ rights to be heard.’’

Officials in Attorney General Martha Coakley’s office said the fees “further well-established state interests’’ and reflect the “Legislature’s reasoned attempt to recover part of the cost of judicial review from those who seek it and to create a disincentive to meritless challenges.’’ They also said the law allows the courts to waive the fees for indigents.

In its brief to the SJC, the attorney general’s office cited a 2004 Northeastern University study that found about 60,000 moving violation citations were issued every month — about 720,000 a year — in Massachusetts between 2001 and 2003.

In fiscal 2010, there were 657,413 such citations issued — 10 percent fewer than the previous fiscal year, according to the state Registry of Motor Vehicles.

“Permitting each cited motorist to challenge his or her citation, without even nominally sharing the cost of the challenge, would strain the already thinly-spread budget of the judiciary,’’ Coakley’s lawyers said in the brief.

Judiciary officials said the state’s trial courts have lost more than 1,000 positions due to budget cuts since fiscal 2008.

Sullivan said the state is pushing a system that promotes “the improper use of police powers’’ by requiring those cited to “pay to prove one’s innocence.’’

“For the Commonwealth to impose a fee upon those who are presumed innocent violates every principle of the notion that a defendant is presumed innocent and should be given an unfettered opportunity to be heard on the question of his guilt or innocence without paying for the privilege,’’ Sullivan said in his appeal.

Philip McCue, clerk magistrate of Plymouth District Court, said that until this year those cited were not informed about the cost of appealing their tickets until after they requested a hearing. He said the citations don’t list a fee for filing an appeal and that alleged violators have just had to check a box and mail back the ticket requesting a hearing.

The court would then send a letter with a hearing date and information about how to pay the appeal fee when they arrived at the courthouse. As a result, he said, many of those who requested hearings didn’t show up, wasting court resources.

McCue said under a new system put in place in January, alleged violators pay the Registry of Motor Vehicles the appeal fee before a court date is scheduled. The RMV keeps a portion of the money as an administrative fee.

“I’d say about 10 to 15 percent of the people who requested hearings — the figures that reflect overall hearings for the year — didn’t show up as a result of the old system,’’ he said. “We think this will work better and be fairer. It’s common sense that people are more likely to show up if they’ve already invested in their appeal.’’

On a recent morning in Dorchester District Court, Charlene Allen shook her head after being held responsible for her ticket, even though her boyfriend told the judge he was driving. She spent $75 to fight the $50 ticket.

Robert Rohrer, 27, had success fighting three alleged moving violations that would have cost him $225. He explained to the judge that the officer, who mailed him his ticket, noted on the citation that he was a white male. It was evident he was not.

Rohrer said he had to take off three days of work over several months to contest the ticket.

“I beat the ticket, so why should I have to still pay the $75?’’ he said. “And if I lost, shouldn’t the appeal fee have come out of the ticket? It’s completely unfair.’’

Graphic Appeals of
traffic in Massachusetts
Your comment is subject to the rules of our Posting Policy
This comment may appear on your public profile. Public Profile FAQ