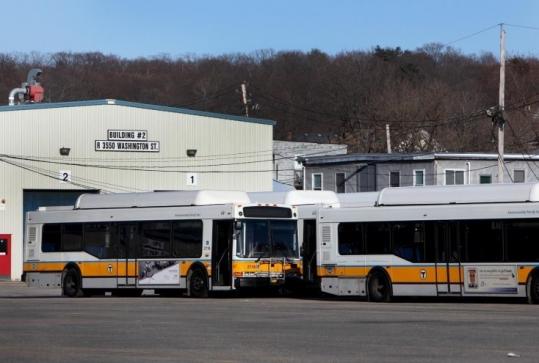 An exasperated but optimistic group of officials and residents from Jamaica Plain converged on the State Transportation Building last week to present a petition with more than 500 signatures and a pair of gold-hued cardboard shovels to encourage state officials to break ground on the long-awaited redevelopment of the 18-acre Arborway Yard, northeast of where Washington Street and the Arborway meet.

The project is widely admired, but the MBTA board is on the cusp of adopting the 2012-2016 capital budget and again omitting the proposal for $200 million in Arborway funding — though the T previously invested $30 million in planning and design for the site, as well as construction of a temporary facility.

Going back 13 years, the T wanted to reuse the mostly empty trolley yard — a vestige of when the Green Line went to Arborway — to house 180 buses and 500 cars. It needed a new place to store, refuel, and work on compressed natural gas, or CNG, buses and wanted to close the Depression-era Bartlett diesel bus depot in Roxbury, under pressure from activists about blight and that neighborhood’s high childhood asthma rate.

In 2001, the Menino administration and a Jamaica Plain group known as the Community Planning Committee for the Arborway Yard succeeded in reaching what seemed like a landmark deal: The T agreed instead to build a consolidated garage facility for 118 buses and employee parking and to turn over eight acres for affordable housing, businesses, and green space.

In the interim, the T closed Bartlett and built an open-air CNG facility at Arborway that was supposed to last five years. It is now seven years old and shows no signs of being replaced. And until the T moves, the mixed-use development will remain only a concept.

Project supporters said the T is in danger of making the blighted Arborway Yard the next Bartlett.

“We’re at a juncture where the T is about to drop us on our heads,’’ said Representative Elizabeth A. Malia, presenting a letter of support signed by Boston Mayor Thomas M. Menino, state Senator Sonia Chang-Diaz, City Council president Stephen Murphy, and others.

“Given the 12 years of planning and associated funding that have gone into the completed design, the broader economic and job creation benefits [of the] transit-oriented development, and the MBTA’s need to adequately house and service its bus fleet, we feel that further delays in the construction of this project would be shortsighted and would represent a broken promise to the city and the neighborhoods we represent,’’ the letter said.

Henry Allen, chairman of the community group, led a similar presentation last year when he said he had been working on it through “12 years and five grandchildren.’’ Last week, he talked of 13 years of work, and of the T’s “broken promises.’’

After the group departed, Davey could say only how much he loves the project — and how little the T can afford to pay for it, with some $8 billion in outstanding debt and another $3 billion in maintenance needs for aging vehicles, track, and other infrastructure.

“As we weigh our needs when we have structurally deficient bridges, and power upgrades that are needed, vehicles on the commuter rail, and overhauling Green Line cars — there’s a whole host of projects,’’ he said. “It’s going to be very difficult for us to do it.’’

Comparatively speaking, the T is a bargain

Wondering how the T stacks up with other transit agencies on the cost of a subway or bus ride? Well, Rich Davey did. The first-year MBTA general manager has fielded an array of complaints and concerns about service this winter, some from people who think even a dollar would be too much to pay. Curious, he asked his staff to survey 23 other urban transit systems in the United States and Canada to compare.

Turns out T riders fare fairly well on fares. No one charges less for a bus ride, and the T is tied with New Jersey Transit’s Camden, N.J., service for cheapest at $1.25 a ride (with a CharlieCard). Most others in the survey charge $1.50 to $2.25, including the reduced fares in places that offer a CharlieCard-style discount for riders with a reloadable card.

The MBTA’s subway also ranked among the more affordable in the United States and Canada, at $1.70 (again, with CharlieCard). Most charge $2 to $2.50.

Five other systems with prices that vary by distance offer short trips that are cheaper than the T’s one-size-fits-all fare but quickly become more expensive, like the Bay Area’s BART, where fares range from $1.64 to $9.89, and the Minneapolis Metro Transit, which ranges from $1.58 to $2.03.

“I thought it was a very interesting picture,’’ Davey said, after reviewing the data. “It’s not an excuse for some of the service we had, but I want folks to know that we’re trying to balance the challenges of our financial situation [with] recognizing that we need to provide as low-cost service as we possibly can.’’

The survey also looked at daily, weekly, and monthly “combo’’ passes that let riders take unlimited bus and subway trips. One-day tourists beware — the T’s $9 daily combo pass is no bargain, at least not compared with Baltimore ($3.50), Chicago’s CTA ($5.75) or even Montreal’s STM ($8 Canadian, equal to $8.22 in US dollars).

The MBTA last increased fares in January 2007, with the system-wide rollout of Charlie. Scheduled hearings on proposed fare increases in the summer of 2009 were abruptly canceled.

Since the last fare increase, most major transit agencies have raised fares, cut service, or both. Davey has said he wants to avoid having either one happen next year. Instead, the budget that Davey’s team prepared for fiscal 2012, which begins July 1, closes a projected deficit with a variety of measures, including refinancing debt, securitizing most of the T’s long-term parking revenue — selling the projected income to investors in exchange for cash now — and leasing control of the North Station garage.

The T’s board has not fully vetted those plans, and John R. Jenkins, the chairman, suggested that they might not all be part of the final budget that the board is required to pass by April 15.