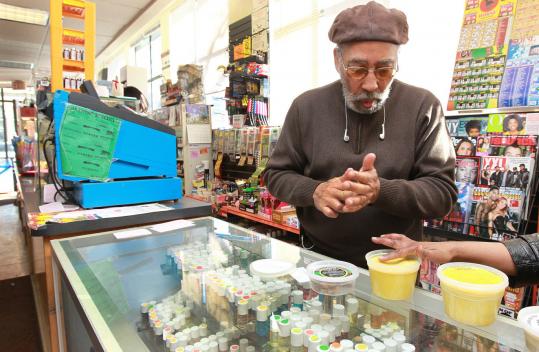 As a lunchtime crowd of young professionals tapped on their laptops at the Haley House Bakery Cafe, an arty coffee house with exposed brick and homemade pastries that stands out among the care-worn discount stores and grinder shops in Dudley Square, Bing Broderick welcomed Mayor Thomas M. Menino’s latest effort to revitalize the district.

“There hasn’t been a bright light here for a while,’’ said Broderick, the cafe’s business manager.

Across Dudley Square this week, the mayor’s plans to restore the abandoned Ferdinand Building to help spur economic growth in this neglected section of Roxbury were met with renewed hope and long-held skepticism of the city’s commitment to the area.

“I support this, if it is going to do some good and bring in more jobs,’’ said Bessie Braggs, a 65-year-old Roxbury resident, as she waited for a ride on Washington Street. “I’ve been waiting for changes around here for too many years.’’

The restoration of the Ferdinand, in the heart of Boston and its minority community, has been a flash point over the slow pace of development in Dudley Square for at least a decade. Residents pushing to lift the square from its bedraggled reputation have seen revival as critical for struggling businesses.

“When you look at the various squares in the city, Grove Hall, Egleston, they have outpaced us in terms of development,’’ said Sharif Abdal-Khallaq, who co-owns A Nubian Notion gift shop and welcomes the plan. “I don’t think any of them has been as blighted as Dudley.’’

The Ferdinand Building, a five-story Baroque Revival built in 1895, sits on a corner of Dudley Square. Surrounded by hip-hop clothing stores and hair salons at Warren and Washington streets, the shuttered furniture store has sat idle for 30 years as a symbol of urban blight and Roxbury’s potential.

Around it, different worlds collide. There are those who turn up for a weekly jazz supper club at the restored historic Hibernian Hall nearby, and the men and women who stagger to the MBTA bus hub with their addictions. Near the pristine sidewalk outside the new Ashley Stewart clothing store are piles of litter and meddlesome loiterers. Parking is scarce, and gypsy cab drivers hop out of their vehicles to yell at passersby: “Taxi! Taxi!’’ Some of the businesses, including the square’s only art gallery, lock their doors in the daytime.

City and state leaders have long promised to rebuild the Ferdinand and bring government offices there. In 2004, when Governor Mitt Romney reneged on his pledge for the Ferdinand, the mayor announced plans to take over the building by eminent domain. He later held a ceremonial groundbreaking there, and a design contest for the building. But the project never got off the ground, partly because of the stumbling economy. It caused disillusionment among merchants, some of whom moved to the square hoping to reap the benefits of a new Ferdinand, advocates say.

Dot Joyce, the mayor’s spokeswoman, said Menino has never wavered from his commitment to Dudley Square, and that this time, the city will take on $115 million in debt for the Ferdinand project while preserving the building’s elaborate limestone, marble, and brick facade.

In his speech at the Boston Municipal Research Bureau’s annual luncheon on Thursday, the mayor acknowledged that there has been more talk than action about revitalizing Dudley Square. He plans to move the Boston Public Schools headquarters there, and the fire department’s at 1010 Massachusetts Ave.

“Let’s stop the meetings,’’ Menino said in the speech. “Let’s break ground and create jobs . . . We will never know how great Boston can be until Dudley Square is great once again.’’

In recent months, some Roxbury residents had been incensed by what they saw as the mayor pushing development in other parts of the city, with hardly a mention to Ferdinand. But now, they are coming around.

“We are actually encouraged by this,’’ said Rodney Singleton, a Roxbury advocate who participated in community meetings on the issue. “This is the kind of thing that will get businesses interested and get folks back to Dudley.’’

Longtime Roxbury residents commended the mayor this week for an honest effort for Dudley Square through the years. He created the Dudley Square Vision Project in 2007 that lays out items in his current plans — rebuilding the Ferdinand, renovating the library, and opening a new police station in the square this summer. The mayor’s staff is also soliciting developers for empty parcels in and around the square.

That’s good news for Ronn Garry, who co-owns Tropical Foods Supermarket and has waited about four years to be able to bid on adjacent land in an effort to expand his Washington Street business to include a deli and bakery.

Near the Ferdinand Building, where blue boards cover the windows and construction fencing lines the site, Joyce Stanley also had praise for the mayor’s new push, saying it would mean Dudley Square could continue working on its long-term vision.

“We need it developed for a lot of reasons,’’ said Stanley, who runs Dudley Square’s Main Streets program. “One, it’s in the center of Dudley. And it’s on a street that is like an empty hole. We want to fill that hole.’’

Joel Son, whose clothing store hawks urban-labeled hats and studded skinny jeans and faces the Ferdinand, said the community has yearned for life in the old wedge-shaped building.

Said Son: “We don’t like to see empty spaces around here.’’