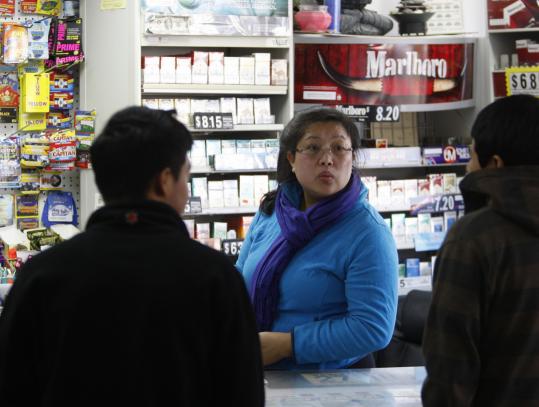 LYNN — When the man wearing a hood and dark sunglasses walked into Bosolakhana Thach’s convenience store Monday afternoon, she knew he was not there to buy anything. She had been robbed twice before, and she was determined to stop a third attempt.

The man leaned over the counter of the Arnold’s Bakery Outlet on Lewis Street, said “Hi,’’ and, with a knife in his right hand, calmly warned Thach to stay away from any alarm buttons, according to a surveillance video that captured the encounter. “Give me the money in the register now. No buttons. Put the phone down.’’

Then he turned his head. And that was when Thach swung a 4-foot, 15-pound iron rod from behind the counter and brought it crashing down on his wrist.

“He had the knife, and I felt like I had something prepared, too,’’ Thach said yesterday, holding the rod that knocked the knife from the man’s hand.

“I was not mentally prepared to hurt him or knock him down,’’ she said. “I was just thinking to get the knife away from him. He was confused after I hit him, because he just stood there, but then I told him to get out because I was calling the police.’’

The surveillance video shows Thach brandishing the rod at the stunned man and repeatedly asking, “You want it?’’

The man fled, and police are now searching for him, said Lynn police Lieutenant William Sharpe.

“She has been a victim before, and this time she fought back,’’ Sharpe said. “We don’t advise people to confront armed suspects, but in this case, she was able to fend him off.’’

Robberies, both armed and unarmed, have increased recently in Lynn, according to police statistics. In 2009 there were 185 such crimes, and last year there were 212. There was another attempted robbery Monday, at a pub not far from Thach’s store, Sharpe said. The suspect was caught and is not the same person who attempted to rob Thach, he said.

The convenience store suspect ran and was chased briefly by longtime customer Eric Botelho, who had just parked his car and was heading into the store to buy lottery tickets. Yesterday, Botelho returned, and Thach gave him a big hug.

“She’s a very family-oriented person, very nice to customers,’’ he said. “If you needed something, were down in the pits and needed bread or milk, she would help you out. I saw the guy running out, and I got back in my car to chase him, but he got away.’’

Thach recognized the suspect as someone who had walked into her store about a week earlier, wearing sunglasses. Then, she thought, he was preparing to rob her, but something changed his mind and he left after purchasing a lighter.

Thach said that about a year ago, a man walked into her store, brandished a handgun, and demanded money.

Thach said her 9-year-old daughter was behind the counter with her. The suspect took money and left.

“Those experiences changed me,’’ she said. “Whenever somebody comes in wearing shades or a hat, I don’t know what to think. I get nervous, and I wonder if they are going to rob me. It was demoralizing and I had a lot of fear.’’

Her fear prompted her to ask a friend recently who works in construction to cut her a piece of iron that she could use for protection. “I was lucky yesterday,’’ she said, “because I was the only person in here, so I wasn’t afraid that anyone else was going to get hurt if I fought back.’’