In need of an exit plan in O’Neill tunnel 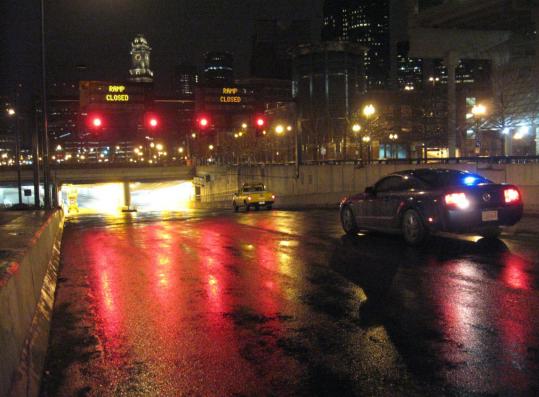 A reader wrote of his frustration trying to get to South Station while driving through the Thomas P. “Tip’’ O’Neill Jr. Tunnel. Above, a tunnel entrance near the Haymarket T stop. (Christina Pazzanese for The Boston Globe)
By Christina Pazzanese Globe Correspondent / February 28, 2011

Two readers asked Globe Watch why the most expensive public works project in the nation’s history remains in what seems like a constant state of construction.

Rick Bethel wrote that he had a bad experience recently driving through the Thomas P. “Tip’’ O’Neill Jr. Tunnel from the North Shore one night to pick up his daughter at South Station.

“I came from the Tobin Bridge and as I entered the expressway there were construction cones closing two lanes. All exits throughout the tunnel were closed, or so it appeared,’’ he wrote.

He said the sign indicated exits “20-24b’’ were closed, but he could not tell whether that meant every exit between 20 and 24b were closed or just those two.

“If any exit was open it was very confusing with all the cones lining the highway,’’ he wrote. “The only option was to reverse direction and hope that the northbound exits were open.’’

Bethel said the Government Center exit was open, but the unexpected detour made him 45 minutes late.

Meanwhile, reader John MacDonald wanted to know why so many years after the tunnel opened, its entrances and exits appear to be unfinished.

“The I-bar [the steel reinforcing bars embedded in the tunnel walls] is exposed on the 93 South and the airport entrances as well as the exit from the airport,’’ wrote MacDonald. “Given all the money that was spent on the Big Dig it is puzzling that these entrances, at the heart of the city, remain such an eyesore.’’

The state responds
Crews in the tunnel are doing maintenance and cleaning in various locations, five nights a week. Generally, the work is performed Sundays through Thursdays between midnight and 5 a.m., though that schedule sometimes varies, said Adam Hurtubise, a spokesman for the Massachusetts Department of Transportation, in an e-mail.

A variety of projects may occur simultaneously to fix leaks, make other repairs, and do maintenance on pavement, fire protection devices, lighting, signs, cameras, and drains, among other work, he said.

“The work often requires periodic lane or ramp closures to protect workers who would otherwise be working alongside live traffic. The closures are coordinated through our work access process distributed to the public as traffic advisories,’’ Hurtubise said.

Hurtubise said the traffic advisories, which alert drivers to the closures, are distributed to news organizations and other outlets that monitor traffic.

Most of the maintenance and lane closures are done by MassDOT staffers, he said, but some of the work is performed by contractors.

“The detour signs are posted depending on which ramps or lanes are closed. We will remind our crews to be clear about which lanes or ramps are affected each night,’’ he said.

UPDATE: In response to a reader’s inquiry in a column published Feb. 14 about darkened lights along the Mass. Pike, a city spokesman said the Public Works Department has repaired all the broken fixtures on Everett Street in Brighton as it crosses the highway. The lights had burned out, he said.

Readers with problems they would like addressed can send e-mails to globewatch@globe.com.