Goal of effort is to reinvigorate park use 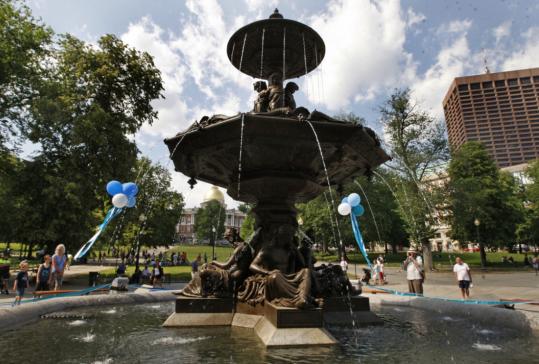 Water flowed from the reopened Brewer Fountain on the Boston Common on May 25 last year. It cost $640,000 to repair the fountain, which had been dry for about a decade. (Barry Chin/ Globe Staff)
By Andrew Ryan Globe Staff / February 28, 2011

Free wireless Internet access. Chessboard and checkerboard rentals. The fingers of a professional musician dancing across the keys of an outdoor piano.

Welcome to the new Boston Common, which is expected to debut this summer. Crews will break ground next month on a long-awaited face lift for the shabby plaza surrounding Brewer Fountain near Tremont Street.

“It’s going to be like a Parisian park,’’ said Elizabeth Vizza, executive director of Friends of the Public Garden, which also advocates for Boston Common and is spearheading the project. “I would say it’s going to be a complete transformation.’’

The $1.5 million initiative will replace cracked concrete with granite, plant trees, and install a sprinkler system in Liberty Mall, the grassy expanse leading to the State House. But it will do more than that. Sketches approved by the city show a newly invigorated piazza with 30 patio tables, umbrellas, and 70 movable chairs.

The plans include some unusual touches. A “reading room’’ will be stocked with magazines, newspapers, and carts with 400 books. A high-end food truck will sell hot meals. And the piano — a professional-grade electric keyboard made to look like a piano on wheels — will offer lunchtime entertainment as early as July.

“These new upgrades will bring much-needed vitality back to this area and provide all of the amenities our residents and visitors deserve in this historic location,’’ Mayor Thomas M. Menino said in a statement.

A separate initiative may bring free WiFi to 80 percent of Boston Common as early as this spring, according to Menino’s spokeswoman, Dot Joyce. The company that built the free wireless network on the Rose Fitzgerald Kennedy Greenway wants to construct a similar system on the Common. Joyce said most of the cost would be paid by the company, Anaptyx LLC of Watertown.

Computer connectivity would encourage people to lounge in a space that many had not used in recent years because of its decline.

It is the latest phase of a renovation project that began with a rehabilitation of the fountain at the center of the plaza. The ornate bronze sculpture was imported from Switzerland by a wealthy merchant named Gardner Brewer and assembled on the Common in 1868.

But it fell into disrepair and stayed dry this century for almost a decade.

Following the $640,000 repair project, the fountain spurted water again last spring and the latest additions, including the piano and activities, are part of an effort to go beyond granite and grass.

“It’s urban place-making,’’ said Ted Furst, the project manager for Biederman Redevelopment Ventures Corp., a New York City-based parks consultant hired by the Friends of the Public Garden. “Taking a place that’s now not such a nice place to be and making it beautiful and relaxing.’’

Daniel A. Biederman, who helped pull Manhattan’s Bryant Park back from the brink of urban decay in the 1970s and now works in cities across the country, said his company is looking for new revenue for Boston Common. He is working to secure more money from groups that use the park while lining up corporate sponsorships similar to those in Bryant Park. Nothing has been finalized, but Biederman said recently that several companies were interested in supporting efforts on the Common.

The current project will be funded by private donations, according to the Friends of the Public Garden, which has already raised almost $1 million. Donors who give $100,000 or more will be honored by having their names inscribed in a granite band surrounding the plaza, Vizza said. Lesser contributions will be recognized with benches and trees.

Next year a second $1 million effort will redefine the edge of the park along Tremont Street, where an expanse of concrete does little to distinguish between the often-clogged sidewalk and the beginning of the Common. An iron fence will be rebuilt and grass and plantings will be restored, enclosing the plaza with greenery.

But first the Massachusetts Bay Transportation Authority must complete an $8.7 million project adding two new elevators to Park Street Station where it emerges from underground near the fountain.

The first phase of work on the plaza should be completed by the summer, making way for the furniture and other dynamic additions, which will cost $68,000 to $80,000. The tables, chairs, and umbrellas will be stacked and locked at night to prevent theft.

Details for the food truck still need to be settled. In an application submitted to the Boston Landmarks Commission, organizers used Clover Food Lab as an example of their vision. Clover already has a truck on the Greenway that serves french fries with fresh rosemary ($2) and chickpea fritters ($5) on a pita with house-made hummus and cucumber-tomato salad.

The reading room, which will start with two book carts and a periodicals rack, will be stowed at night near the Frog Pond. So will the custom-made piano, a feature that will cost $12,000 to $15,000. A real piano would be difficult to keep in tune outdoors because of humidity and bumpy paths, organizers said.

A similar keyboard has been used for eight years in Bryant Park, where members of the American Federation of Musicians play jazz and ragtime. The local chapter of that union plans to provide entertainment on Boston Common.

“We’re committed to working with the city to make this happen,’’ said Mark Pinto, secretary-treasurer of the 1,600-member Boston Musicians’ Association. “We want to be involved. We think it’s a great thing.’’